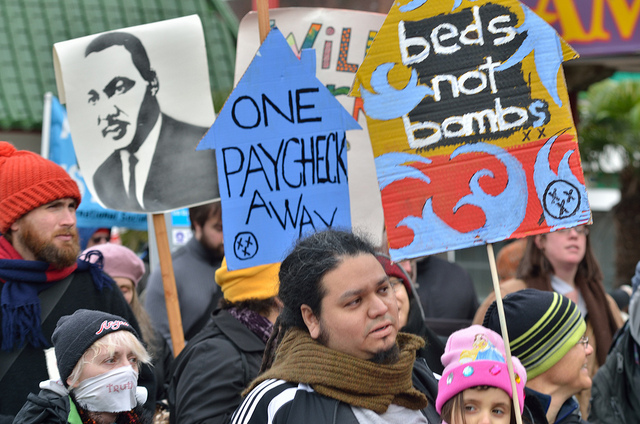 Meet Angelah Hill. She’s a 49 year-old mother in Portland, Oregon, and like plenty of people today, she’s fighting to save her home from foreclosure. What makes Angelah’s case worth noticing is that, as a black woman, she is the poster child of racism and predatory lending when it comes to foreclosures. Contrary to the racist and simple-minded caricatures of African people expressed by various wannabe candidates in the Republican primaries, Angelah is a registered nurse who has successfully run an adult care home in Portland for over a decade.

Her income was reduced in 2008 through no fault of her own. Angelah began to have difficulty making her monthly mortgage payments. Angelah’s payments increased and she didn’t fully understand the loan structuring that caused her payments to jump up dramatically, compounding the problem. The crazy math that tells the story of Angelah’s situation is typical for non-white people in the racist world of financing. It’s also a phenomenon that has become increasingly familiar to poor white consumers and is something that the largely-white Occupy movement has made a central issue as it relates to whites. Very few people still understand how systematic this exploitation is for people of color. For example, Angelah came into her property in 2002 with a $70,000.00 down payment. She admittedly had some credit issues at the time so she gladly accepted the “help” of a white mortgage broker, who assured her he could secure stable financing for a 30 year mortgage loan. Today, in spite of the hefty down payment she made, Angelah owes almost $300,000.00 on her home which she says currently appraises for $145,000.00. Her home has been in and out of foreclosure since 2008. She had a buyer ready to buy the house for $145,000.00 and that borrower was approved for $155,000.00, but her lender, Wells Fargo Bank, dragged their feet on approving the short sale process. The potential buyer found another house. Now, she continues to struggle to come up with payments while falling farther and farther behind and waiting for the hatchet to drop.

There are plenty of people of all sizes, races, and colors out there who are going to ask how this classifies as racism, or how the banking industry is even at fault in this situation. This lady lost her income and can’t pay, so she should just surrender her house right? Here are the reasons why that’s not right:

Angelah Hill is the face of victimization of a racist system and Wells Fargo Bank is the face of racist practices by banks and lenders. Angelah’s supporters demand that Wells Fargo back off of foreclosing on Angelah and either forgive all or a portion of her and other people’s loans who were unknowingly set up with bad loans. Wells Fargo should use some of their massive profits to engage in community financial literary programs, as credit unions offer, so that people can properly understand lending products and avoid being stuffed into the trap into which Angelah fell. No one should be judgmental about this. We have all signed something, whether a job contract, marriage license, or commitment of some kind that we found ourselves not properly understanding and/or unable to honor, often due to changing circumstances no one was able to predict. If that wasn’t true no one would ever need to change their job, or go to court for divorce or child custody issues, right? The difference is you typically don’t lose the roof over your head when you don’t understand those previously mentioned things. That’s why it’s time to start with Angelah Hill and hold these banks accountable. Not one more person kicked out on the streets! Non-white people are sick of working harder than anyone else to achieve a so-called American Dream, only to continuously get the American Nightmare Malcolm X spoke so eloquently about. It’s time the banks are held accountable too! Let’s demand a higher level of accountability beyond just working class people and people of color!

6 comments for “Saving the Home of Angelah Hill”