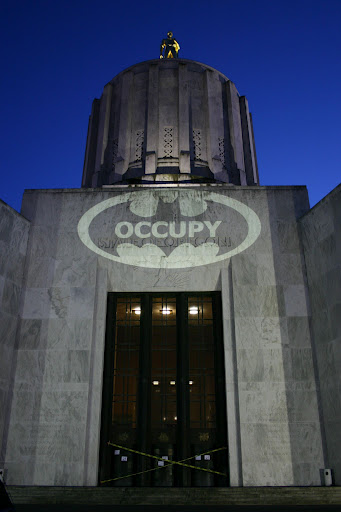 On Wednesday, February 1st, Occupiers from across Oregon gathered at the Oregon State Capitol in Salem, to greet the legislators on the first day of the new session, and to make their case against corporate influence in the legislature known.

The tone of the rally and lobbying session represented the diversity of the Occupy movement in the days after the camps were evicted. While union solidarity with the ILWU has been a major campaign planned by a number of Occupy activists, and direct action against corporations is being planned through a national day of action on February 29th, the Occupy the Legislature event was attended by a subset of the movement interested in bringing the broad Occupy message and membership to the state-level political scene.

And while the Occupiers who showed up were fewer than other actions, at around 100 total throughout the day, they came from all corners of Oregon: Portland, Salem, Eugene, Oregon City, Beaverton, Gladstone, Corvallis, Bend, Newport, Roseberg, and Tillamook–to name those who made their local communities known. The issues of the day were primarily campaign finance reform and anti-corporate personhood; the action was mostly speeches, informational outreach, and targeted lobbying against a few known members of ALEC: the American Legislative Exchange Council, a group that writes pro-corporation legislation and the presents it to lawmakers for passage in their legislative bodies. And yet, while perhaps tamer than many Occupy events, lawmakers should note that support for campaign finance reform and anti-corporate personhood indeed comes vociferously from all parts of Oregon, and not just from those major cities that generate the most Occupy-related headlines.

The Salem police certainly seemed to expect the standard Occupy-related headlines, calling in mutual aid from Portland, who sent at least fifteen bicycle-mounted officers down to an event that had no arrests, or even verbal disagreements between any protester or law enforcement officer. The biggest controversy of the day came when Occupy Portland’s “Grateful Great-Grandma” ‘Nan’ was escorted out of the Capitol for displaying signs on her walker in solidarity with the 99%, as displaying political signs inside the State Capitol seemed to be against the rules. But, it was nice for those protesters to see their local Portland bike cops orbiting the peaceful gathering–as it would hardly seem an Occupy event without an overly anxious police presence. Portland protesters also had a chance to meet Salem’s riot police battalion again, who had been present for the eviction from Lownsdale and Chapman Parks, as well as other events.

The Occupiers met briefly with Governor Kitzhaber in the entrance to his office, where he thanked them for coming, and mentioned his own pet legislation that he said, “supports the 99%”. After going into the legislative offices to present certain lawmakers with “awards” for their notable acceptance of large amounts of money from corporations, and for their membership in ALEC, the Occupiers returned to the steps of the State Capitol, where they ate food, discussed their issues with passersby, and as they always do: discuss what they were going to do next. 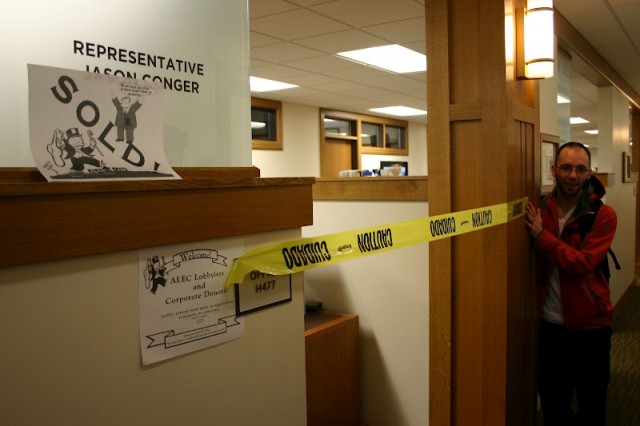