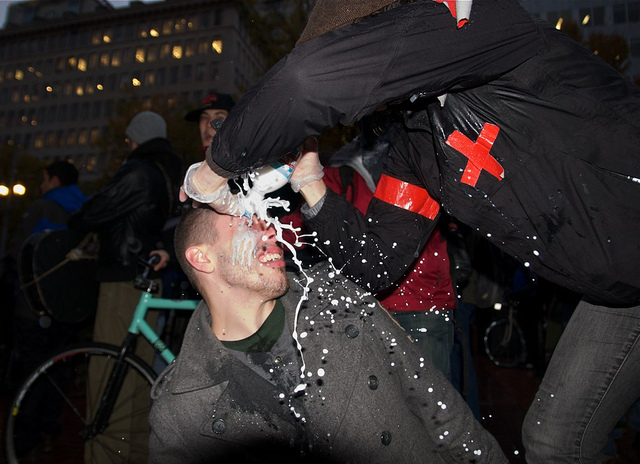 This article is about a currently contentious topic. The editors are posting it along this contrary article, which takes a different perspective. We offer them both, together, as a way of fostering discussion and debate.

The response in Oakland to Occupy Oakland’s move-in day on January 28 came as a surprise for a number of reasons. In Oakland California, the local Occupy movement had been through much in previous months—from the initial eviction from Oscar Grant Plaza in November, to the success of the general strike and West coast port shutdown. Occupy Oakland received an outpouring of support and solidarity on a scale it had not seen in weeks, as thousands took to the streets in an collective attempt to occupy a vacant building and transform it into a new common space for the movement. The sheer audacity of this action, coupled with the massive mobilization that made it possible, came as a much-needed catalyst in a time of relative stagnation for the Occupy movement as a whole, which had begun to lose much of the public attention and participation it had received prior to the series of encampment evictions in November, orchestrated by city officials throughout the US. Indeed, the only thing that didn’t come as a surprise was the inevitable police backlash that followed.

One the most common responses to the kind of police brutality the Occupy movement has experienced is an appeal to tradition in one form or another. “What has happened to this country?” is a question anyone with any knowledge of US law enforcement’s abuse of power has undoubtedly heard or asked at least once. For those previously unexposed to the horrors of police brutality, such a reaction is natural, even healthy. But after nearly five months of non-violent protests met with beatings, rubber-bullets, teargas, flash-bang grenades, and hundreds if not thousands of false arrests, the question of whether or not such behavior is an inherent part of policing seems all too naive and quaint. Yet, in the immediate aftermath of the Oakland crackdown, as occupiers in Portland and elsewhere took to the streets in solidarity, the concern for some was that outrage at the event would take the form of unrestrained, inarticulate hatred and disrespect for police authority, potentially alienating those with more moderate, traditional views.

This concern is nothing new. The insistence that “the police are the 99%, too” has been repeated ad nauseum since the day the encampment at Chapman and Lownsdale began, and has undoubtedly been voiced at every other major encampment at least once. There is a constant fear that every action taken or opinion expressed by members of this movement will determine its success or failure, whether it draws in an even greater mass of supporters, or alienates entire demographics. At the heart of this concern is a desire to revert to some older, presumably better point in US history, when police were the protector of citizens and upholders of the law, rather than the hired guns of the 1%. This desire is understandable, but it is built on a myth.

The purpose of any police force is to preserve economic and social inequalities. This has always been the case and continues to be, both in the US, and around the world. Even if one ignores the racist roots of US law enforcement (emerging largely out of slave patrols tasked with capturing runaways and preventing revolts among enslaved black populations in the south), and its gradual militarization over the past four decades (beginning with the establishment of SWAT teams in 1968), the fact remains that protecting the property rights of the rich is a fundamental part of what police do, whether it takes the form of enforcing eviction orders, harassing the homeless, or arresting activists. This is not a new development, any more than it is a simple matter of a few particularly corrupt police departments overstepping their authority. The problem is symptomatic of capitalism itself, a system which elevates one class of people at the expense of another.

What does this tell us, then, about exceptional cases of police brutality and corruption? Even if protecting the 1% is the job of the police, what is the point of abusing non-violent protesters, conducting unlawful searches, planting evidence, forcing false confessions, or any of the seemingly senseless acts of violence and cruelty so commonly attributed to corruption in law enforcement? The assertion that “power corrupts,” while seemingly true, does not bother to explain why. Perhaps the answer lies less in the aggressive disposition of a few officers, and more in the nature of law enforcement as a social institution, or “police culture.” It may be that the racism, sexism, homophobia, and classism are not accidental, but inherent parts of policing as an institution, serving as a psychological defense against the moral dilemma of having to choose between one’s own employment and livelihood and that of another on an almost daily basis. In this way, police culture is much like military culture, with its own racist, sexist, and homophobic tendencies. In any profession that involves indiscriminate violence and oppression, the dehumanization of the victims is essential.

The Occupy movement has succeeded in rallying the forces of the 99% in the hopes of dismantling a system created and controlled by the 1%. But victory will not be achieved unless every institution that represents that system is challenged, including police authority. Individual officers may sympathize with the movement, but their loyalties ultimately rest with the state, and by extension, the private interests that control it. The problem lies not in the corrupting influence of a few bad officers, but in the nature of law enforcement itself. Justice, as we now know it, is nothing but the preservation of current inequalities, making no distinction between rich and poor.

16 comments for “Blind Justice: Why There’s No Such Thing as A Good Cop”