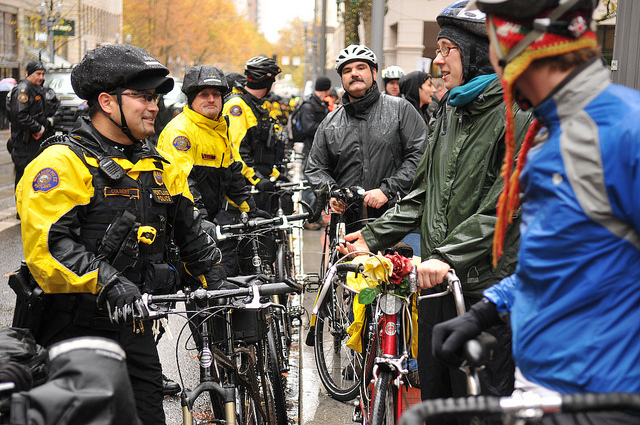 This article is about a currently contentious topic. The editors are posting it along this contrary article, which takes a different perspective. We offer them both, together, as a way of fostering discussion and debate.

I had a debate going to the OccuPicnic at Chapman, but after throwing out my back, doing much more than sitting around with a heating pad was not an option. Instead, I watched through the Livestream. It was a festive atmosphere, old friends greeting, everyone back in the park, it was great to see! Then a group gathered at the Elk statue and began to sing songs. They did a Occupy song to the tune of the old Fraggle Rock theme. They jammed on drums and guitars and mandolins and accordion. Then something happened which seriously made me reconsider associating myself with the Occupation.

A police car drove by. The driver flashed the peace sign out to the occupiers. Amazing moment. A moment to build bridges and drive us into new a better heights. Then it was ruined when the ol’ “No Justice! No Peace! Fuck the Police!” chant came out. I had to shut off the stream before I broke something.

Let’s take a moment to issue caveats here. Yes, I know that the police have done things that aren’t cool. Yes, I know that people have gotten hurt, property destroyed, and justice mis-served. This only means that we have to reach out even more.

Let’s take a thought experiment here for a moment. Let’s say that I am a professional boxer, and so is my friend Steve. Now, in a few weeks time, Steve and I will have to fight. What is a better strategy? A) Make friends with Steve, hang out, get friendly. B) Totally piss Steve off. Screw him over, steal his wife, burn down his house. When that bell rings and it’s time for me and Steve to throw punches, is Steve more likely to try and kill me when he’s mad, or might he hold back just a bit when we were just drinking and laughing a day before?

Likewise, the Police. Let’s say that officer in the car who gave us the peace sign is in the riot lineup next time. Do you think he’ll be more or less willing to swing a club or spray mace if we chant “Fuck the Police” at him?

On top of this, let’s consider someone not even involved. Let’s say Bob the Worker is walking by at that time. Is his attitude likely to be swayed by a rousing chorus of “Fuck the Police”, or is he likely to say ‘bunch of stupid anarchist kids’? And this is what this particular chant reeks of. Not rebellion against corrupt police practice, but rather infantile whining about being told what to do.

It worsens our relations. Provokes more violence. Weakens our cause. Demeans the Occupation. Paints us as hypocrites. It is, simply put, the worst chant ever. Occupy is bigger then this. We are better. We don’t exclude. We don’t judge. We accept. We incorporate. We embrace. We correct. We aren’t children crying because we have to clean our room. We are adults, putting down limits. Brutality is not acceptable from the police, but incitement is not acceptable from the Occupation.

“You say you want peace,
Well that’s just a lie,
When you ‘Fuck the Police’,
You ‘Fuck Occupy’!”