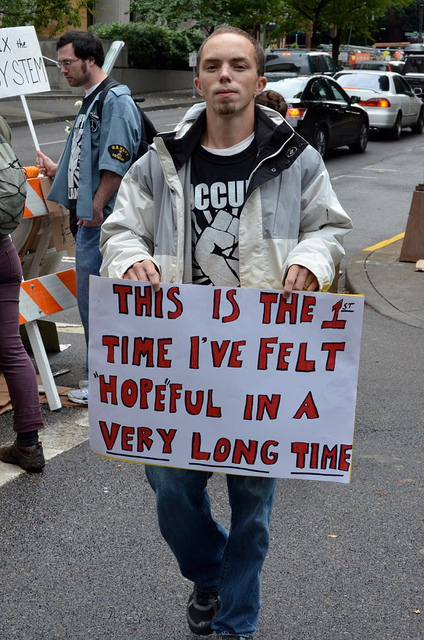 This coming weekend a project called Occupy Voices will be collecting interviews at the Occupy Solidarity Social Forum (OSSF) this weekend in Olympia, on Saturday from 10am to 4pm, and Sunday starting at 10am. They will also be set up at the Occupy Portland office at St. Francis on Thursday, February 23rd, from 11:30am to 4pm.

Occupy Voices is a project that seeks to elicit the stories of thousands of individuals across the country to illustrate economic crisis as told from human experience. It aims not only to present individual narratives of struggle but to also serve as an outreach tool. In its first week of launching, the project had collected 80 interviews in Portland.

Occupy Voices started at inception as a proposal for forming an oral history project within the Occupy movement. It was brought forward in recognition of the value and strength that the capture and exhibition of in-depth personal histories has in empowering marginalized voices and bringing them to popular attention. Discussion in their initial meetings focused on how the merits of this kind of work could be used to have an impactful application for the movement and from this they decided to design the project to emphasize its potential as a galvanizing outreach tool.

The project operates on a five to ten minute short interview format that primarily utilizes two open ended questions: “How have you been impacted by the current economic climate?” and “What would you like to see changed?”. From this they have received many deep personal stories that have given color to issues of economic inequality, social justice, and political corruption.

Occupy Voices makes these interviews available online as a collection on their website, OccupyVoices.org, with interviewee consent, under a Creative Commons non-commercial use license. They present videos without editorship except to remove the footage used for cataloging, the consent agreement, and the moments in which the interviewer asks the primary interview questions.

The website is a large part of the experience of this project. The hope is to see people who have felt alienated by their own struggles to find other interviews that they can identify with and understand that they are not alone, and for those in more advantaged positions, identifying and understanding situations alien to their own. A larger goal is to see individuals take initiative to collect interviews in their own communities or uploading interviews of themselves. Those interested in performing focused oral history projects are invited to use them as support.

The stories collected are seen as one of many contributions to a shared folklore of struggle that can be engaged with in creative and positive ways and they invite people to help its forms emerge. With the Creative Commons license, they encourage use of the content for video projects, guerrilla theater, transcript performance, playback theater, bat signaling, pamphleting, collaging and DVD mailings to persons of interest.

To encourage participation, OV has also created an easily reproducible and accessible process model for anyone who wants to volunteer or to collect stories in their own community. For this they have produced training documents with guidelines and advice on approaches, equipment, forming an interview team, transcription, and video editing.

OccupyCoordination.org, which hosts weekly national working group webinars, has also been a strong partner in their efforts. Occupy Coordination had initiated a similar effort of their own and have since combined efforts to make this a national project with the participation of other occupations across the country.

After spending the last few months to lay down a back-end foundation to launch from, Occupy Voices is eager to go back out in Portland to conduct more interviews and are calling out for volunteer support and for individuals to come and share their story with them at OSSF this weekend or at the Occupy Portland office this coming Thursday. Volunteer work is open to any capacity of involvement whether it be helping tag videos, transcribing an interview, video editing and prep, or going out and forming an interview team. To get involved visit OccupyVoices.org.