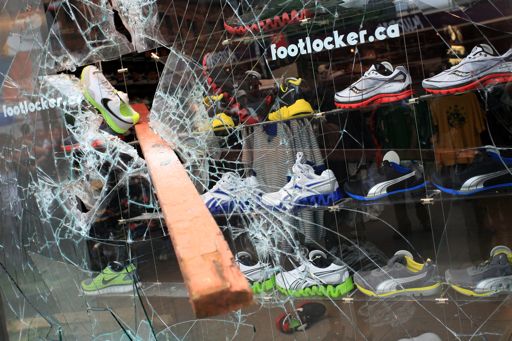 photo via Torontolife (G20 in Toronto)

This article was originally published on Indymedia.

What makes something worthy of being vandalized? Why do occupiers insist on inflicting acts of personal violence and assault in order to protect private property much like the police themselves?

Several things went wrong on Monday [February 6th]’s march to protest police brutality in Portland, Oregon. These issues primarily stemmed from the liberal Occupy movement’s attempted co-option of a radical anti-police march, which was neither initiated nor organized by local Occupiers. Unfortunately, since the march was called for in solidarity with the Oakland Occupy movement’s recent arrests and police conflict, local Occupiers showed up en masse and with a particularly strong sense of entitlement. I remain disillusioned by anything conducted locally under the ‘Occupy’ moniker, which has taken on a decidedly soft, liberal stance on goals and tactics.

With the bumper-sticker approved formula for a pseudo-class analysis put forth by the Occupy movement, the fallacious 99% vs. 1% based class-division has spread like a plague, finally giving aspiring political activists something which is easily digestible and accessible to spring on – to take action in the streets!!! And what easy theory to put into practice, uniting police officers with those they imprison and murder, bosses and capitalist business owners with the workers they subjugate, and allowing anyone of privilege to neglect true class-consciousness and global solidarity in the name of their own depersonalized, non-focused, and primarily white middle-class struggle. What a strange bunch, having pinned the issue of capitalism’s failure yet unwilling to sacrifice it completely in exchange for something better. It is seemingly believed that once the major corporations fall, and we continue to micro-manage our antiquated Constitution with endless ratifications, bells, and whistles, that capitalism and the state which supports it will prevail and fulfill our dreams for freedom. Why replace state-controlled capitalism with something better when state-controlled capitalism works so well for those who perpetuate it? Even their own skewed class-model of the 99% vs. 1% doesn’t negate this fact entirely, though it would be nice if they maintained such numbers after ridding us of the entire upper-class, only to discover that their bosses, business owners, government officials, police officers and the like were continuing to impede on their freedom. If Occupiers cannot see the inherent failures of capitalism as a whole then their movement has been doomed to produce any tangible or sustainable change from the start.

There is a common misconception, held strong by Occupiers, that police are present to protect our safety as taxpayers and will uphold their duty until provoked by so-called ‘violent’ property destruction – and since their parameters for responding to property destruction have been formally predefined, we are at fault for crossing the line and have only subjected ourselves to police violence.

It shouldn’t take an anarchist to see the lack of merit in such a conclusion, especially at a police brutality march! A major mistake was assuming that because folks were marching against the police, that they were actually against the police as an institution, when many seemed to only be marching against what they viewed as minor transgressions in what is (thought to be) a generally functional and effective system. These primarily white, middle-class folks have been disillusioned by capitalism yet have largely maintained a privileged distance from direct police-oppression or state violence prior to Occupy-based incidents. In Portland, these encounters in the Occupy movement have only been abstracted politically into a narcissistic occupation of space, speaking not towards the direct needs of the people for which the state and capitalism has failed, but rather moving forth into the mode of a self-perpetuating institution. Not to say that occupation is not a sound tactic – if used properly and unimpeded from liberal co-option it can be a powerful tool indeed! The movement’s lack of motives and goals and subsequent institutionalization have developed from a combination of general political unawareness, westernized privilege and aimless entitlement, yet youthful desire to evoke change at any costs as a break from our state of disillusionment. People have tasted the idea of change and are clinging to all they know in order to hold their dream strong, yet unfortunately their dream cannot be realized without radical methods and the ultimate goal of an anarchist society free from state and capitalist oppression!

Sorry Occupiers, we will not reduce ourselves to the vile standards laid forth by those who benefit from our corrupt capitalist system, the state which supports it, and the police who uphold it.

The Police are Enforcers, Not Negotiators

Another common misconception amongst Occupiers is the myth that non-violence will always prevail. ‘Pacifism in the face of violence.’ This falsely optimistic view arises from a privileged state of existence, an informal petite-bourgeois comfort zone perpetuated by laws which have evolved over time to marginalize and subject various groups of minorities who lack the means of control and production, while keeping the larger public minimally satisfied, and the elite more than comfortable (an understatement, of course.) These white, middle-class folks have little tangible evidence for their subjection – interactions with police officers often minimal offenses such as traffic violations which can easily be negotiated out of or avoided. Unfortunately, racist, classist, sexist, homophobic, transphobic, heterosexist, and other systematic and widespread forms of profiling don’t afford others the same level of comfort in dealing with police. These dynamics require swift and militant tactics in dismantling such an unjust police state, or doing everything within our capacity to facilitate the end of the state and capitalism as a whole.

Another foul and despicable development within the Occupy movement is the close coordination of protests and actions with local police enforcement, including citizen’s arrest tactics, blatant snitching of black-bloc perpetrators of direct action, and mimicking police tactics to the point of assaulting fellow marchers (and particularly those in black-bloc). When certain actions listed below were initiated, Occupiers formed an ad-hoc group of vigilantes acting on behalf of the police, attempting to identify, subdue, and turn the perpetrator of direct action over to the police – and all for the cause of sanitizing the name of the Occupy movement! Not unlike capitalism and the state, the Occupy movement will seemingly stop at nothing to perpetuate itself. Do not attack an inanimate object in the name of humanity, for they will attack you in the name of their abstract movement and deny the contradiction!!

Here is a description of the things which were vandalized or smashed during the march, listed chronologically. These are detailed as a result of public outcry against the nature of the actions, though may it be known that they were carried out not as a form of public outreach, but in solidarity as retaliatory actions in light of police brutality locally, nationally, and internationally, including the recent murder of Brad Lee Morgan by Portland Police, as well as the ongoing violence and arrests in Oakland, and all comrades imprisoned by our unjust system! Also, it should be mentioned that the final three acts were committed with a black and red flag, and proudly so! Actions included:

— A Honda Element SUV driving through the march was spray painted with a circle-‘A’, the symbol of anarchism. Anyone privileged enough to afford to drive any car does not hold precedent over the countless thousands of people who die in the name of the oil which propels it, nor is their comfort and convenience worthy of the environmental destruction these vehicles put forth. And how much better that it be in motion while being tagged, a symbol of capitalism in progress, of our hard earned oil in use, exhaust spewing on the perpetrator in action. We will not simply allow you to cruise through our march without thinking twice about the brutality you blindly perpetuate. Fuck your cars, fuck your wars, and fuck the police flying overhead who watched helplessly as anarchists destroyed property that they were being paid to protect. There was an Iron Cross decal on the window which was vandalized, a blatant symbol of oppression heavily used in Nazi Germany, and an image that deserves to be vandalized regardless of the surface it’s attached to. Honda is a major capitalist corporation which has been strengthened as a result of purchasing this vehicle, regardless of the buyer’s social position, and thus capitalist oppression continues to devastate all it touches. Surely, the person’s life was equally devastated after having to rub the graffiti off with a cheap rag and solvent – a mere aesthetic and non-permanent offense (perhaps next time the window should just be smashed!).

— The front window of a local business, ‘Genoa Restaurant’, one of, if not the only, five-star restaurants in Portland. This is not a business for the working class, this is strictly a business for the wealthy and privileged, literally spending over $100 a person to consume delicacies such as Foie Gras, a notoriously cruel and unethically produced serving of duck. Money flies out of pockets as disgusting rates as an indulgence indoors while others live houseless and without property, exposed to the elements and hiding in fear from police aggressors.

— A classic Alfa Romeo convertible’s windshield was smashed through in two places and the side scuffed up. This car was not a humble, working-class minivan with a child’s seat, but an extravagant European collectible sports car denoting material privilege. Furthermore, Alfa Romeo has designed cars specifically for the Italian police since the 60’s, and have been used as the automobile of choice by several departments of the Italian police force to this day. May this action be in solidarity with our comrades in Italy, facing similar police brutality and oppression!

— And lastly, a new BMW sports coupe. Similarly, the sides were scuffed up and the front windshield busted through twice. This is a luxury car, and surely the owner will survive a night or two while their car which costs more than the average person or household makes in an entire year sits in the shop. Beyond the bourgeois status of the car, BMW has a dark history of fascist oppression which has propelled them into their current status as a wealthy capitalist enterprise. In fact, the Quandts, founding family and subsequent errs to the BMW fortune (eight of which are among the hundred wealthiest Germans today) utilized approximately 50,000 slave laborers from concentration camps, many of whom died in extreme work conditions or were executed. Openly important members of the Nazi party, the Quandts played major roles in the Holocaust and the forced ‘aryanization’ of Jewish businesses. Fuck those who have profited from the brutal and systematic slavery and genocide of people, fuck BMW, and fuck your windshield – of which I’m sure you can afford plenty more – so pardon the marginal inconvenience from your privileged life.

FUCK YOUR COMMODITIES, FUCK YOUR PROPERTY, FUCK YOUR FALSE SENSE OF MATURITY BASED ON CAPITALIST LUXURY AND PRIVILEGE.

10 comments for “Black Bloc: Things Were Smashed, and Rightfully So!”