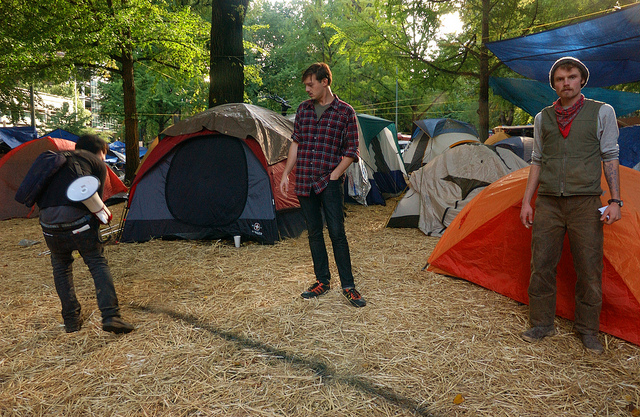 Political protest, whether with an aim toward raising social consciousness within the broad public or with that of challenging authority in the hopes of pressuring power to concede to demand, sometimes (though by no means always) occurs within the framework of a wider protest movement. Unlike specific protest actions, the tactics employed in their manifestation, and the strategies which underpin the wider framework of these tactics, protest movements, as any other social movement, are considerably less centralized and arguably less able to be contained or controlled. It is primarily through the autonomy of the constituent parts of any social movement that it takes hold in the hearts and minds of those who identify with the movement in question.

There exists in any social movement something of a cultural semantic dissonance on the part of the multivariate constituents at a given time. While this dissonance is crucial to the mass appeal of a movement, it may only facilitate the social movement toward and up until the point where break downs occur in the perceived efficacy, commitment and momentum of the movement in question.

Political protest is by its very definition, extra-systemic political activity which aims to address a social grievance through presenting a challenge to culturally accepted forms of authority. This challenge may aim at raising social awareness to a particular social issue to the end of putting that issue on the political agenda of the day or it may aim toward directly challenging political authority in a disruptive manner to the end of pressuring political power to concede to demand. In either case, political protest seeks to challenge culturally accepted norms as a matter of course.

This is not so simple a task as it seems. The hegemonic strains of social pressure which bind the fabric of social norms in place in any society are very strong. Certainly, the institutionalization of cultural habit handed down through a culture’s history manifests itself in such broad and pervasive social forums as politics, economics, the military, religion, education and familial kinship ties. What’s more, those institutional forces which acquire hegemonic force over and above all other social forces actively seek to retain their hegemony through the activity of those individuals and groups within society who actively benefit from it. Given such a social condition, the effectiveness of political protest can only be marginal without being engaged in continuously and in a multitude of ways through mass participation on the part of a wide and diverse segment of the public.

This is the central feature of a protest movement. A protest movement extends across a broad spectrum of societal elements, each motivated for somewhat different reasons. The content or cohesion of these reasons is not immediately pertinent to the efficacy of the movement but the perception of efficacy certainly plays a key role in the maintenance of the movement. The movement to abolish slavery in the United States, for instance, took on ethical dimensions shaped by religion, and general ethical politics and saw its aims ultimately accomplished due to matters of military sensibility. The civil rights movement of the 20th century took on many forms and many tactical and strategic manifestations, from those put forth by Martin Luther King Jr. and southern black Christians to those of Malcolm X and the Nation of Islam, from those of black and white northerners who mounted a campaign to travel to the south and directly confront Southern racism through the freedom rides to the many people who participated in the race riots of the 1960s which lead directly to the drafting of the 1964 Civil Rights Bill. The Second wave of the Women’s Liberation movement in the United states had a similarly mass appeal to women pushing for changes in political, economic, educational and familial institutions through a myriad of tactical and strategic approaches. In each of these cases, the appeals of the movement were at no point controlled or constrained by the ideals or ideologies of any segment of the movement. Additionally, the efficacy of the general cause was felt across all ideations and ideologies of the individuals and groups of which these movements were comprised.

What This Means for the Occupy Movement

Movements of the past have a great capacity to inform our present course of strategy, and should we not fail to ignore them. If we are to grow the now toddling Occupy movement into a powerful and strong engine of social change, we can only do so through nurturing it on the milk of past social movement successes. This most prominently means a few key things. First, we must continue to vocally rally around the central theme of the movement, as it was expressed in the conception of the initiating Occupy Wall Street protests and has continued to be articulated by many actions across the United States and around the world since: “The domination of all facets of society by the interests of corporate hegemony is unacceptable and must come to an end.”

Second, we must adopt a strategy which empowers us to approach political, economic and social change extra-systemically, as it is within the shadow of the recognition and capitalization upon the illegitimacies of the dominant institutions of political, economic and society that our greatest opportunities for success lie. Any strategy thus developed, must recognize the equal importance of focusing on consciousness raising and power challenging methods of approaching social change.

Third, it is important for us to recognize the association of our movement and its struggle with the many movements which have come before it and their successes and failures.

“The domination of all facets of society by the interests of corporate hegemony is unacceptable and must come to an end.” In the months since the Occupation of Wall Street, we’ve seen many different approaches to strategy. The vast majority of these have not lost sight of the overarching theme stated above. If we are to successfully fight the power that is (I intentionally utilize the singular as it is my contention here that there is no plurality of social power in its broadest context), we must recognize that in the American complexion of power, corporate hegemony is king. All educational, religious, familial, political and martial clusters of society are subservient to the interests and motivations of corporate power. This can be clearly seen in the social manifestations of the death of education as an instrument of the exploration of our understanding of the world for the sake of knowledge in the face of the bottom line of the business of educating; of the rise of big moneyed interests within the military-industrial-complex; of the manufacture of familial kinship norms, industries and institutions which have been established to commodify every variety of human relationship from birth, to child rearing, to pair bonding and even to death itself; and of the rise of the mega-church which serves to undersell their church competitors by presenting a more emotionally stimulating religious experience to a wider audience at a lower cost and for a higher rate of donation much as large chain warehouse stores have accomplished in the retail industry. It may also be clearly seen in what is presently its most directly challenged manifestation: the pecuniary axis of institutional power’s domination of our institutions of political governance. It should by now be clear not only that the occupation of Wall Street and indeed of “All Streets” across the United States and around the world is in direct confrontation with the occupation of “all facets of society by the interests of corporate hegemony.”

Strategies which we can thus take to broach fighting the behemoth of corporate hegemony must utilize a logical diversity of aims, methods and tactics. Most crucially, consciousness raising and power challenging are equally important approaches to social change as they provide the means to build political leverage to bring our intentions into the realm of our capabilities as a movement. Action oriented toward consciousness-raising activity seeks to reach out into the minds of the public at large and to question why we obey the leaders of our dominant institutions and how people we are motivated in terms of our ideals, ends and means. Action oriented toward challenging the dominant institutions of authority seeks to highlight their failures and to capitalize upon them in order to directly correct these failures. In each case, the central theme of individual and collective self-empowerment is key to promoting our movement as a vehicle whereby the public may take agency in establishing real positive change and not just feel good hope and squandered optimism. Social awareness may be raised through myriad tactics designed to bring the message of the immorality and social disempowerment wrought through corporate hegemony upon the lives of people everywhere to those arenas of public life with which all facets of the public can personally identify. This can, for example, be done more generally through formal statements through all forms of media, marches, rallies and other attention drawing tactics. It must, however, be done everywhere: In every home, school, church, political and martial outfit. Challenging the dominant institutions of authority may only be logically accomplished through establishing dual power direct action methods of confronting the failures of these institutions. This can be done through occupying space and providing food, housing and medical treatment to dispossessed segments of the community, through mutual aid projects seeking to fix problems which the authorities are incapable or unwilling to approach and through mass action seeking to prevent the authorities from acting against the interest of the public. The
strategic actions required of any successful social movement which seeks to become a mass movement must simultaneously walk down both of these roads.

Finally, it is important to remember those who have come before us. The Occupy movement is neither the first nor the only movement to address many of the issues subsequent to the corporate hegemony which we are fighting to shed light on and to correct. It is necessary, looking forward to remember the contributions of liberation struggles of the past form the American experience as well as other experiences, worldwide. We must honestly assess their successes and failures, their strengths and weaknesses and how these experiences can contribute to the task which we presently have at hand. Ultimately, the struggle for democratic social change is a complex and often difficult one. Through effort over time, the relative powerless within society often attempt to push forward inch by inch, mile by mile. Our overarching aims, strategies and tactical methods must reflect the time and place in our struggle in which they find practicality. These tactics and strategies are most effective when they are engaged in and developed autonomously by many different groups of individuals from broadly diverse segments of society, bearing broadly diverse ideas and beliefs, uniting under an identity held together by a broad and general goal. If we do not, however, seek to relearn the lessons of those who have come before us, the Occupy Movement will join them in the ash heap of history, without a bang or a whimper.

4 comments for “Protest and Movement: What This Means for Occupy”