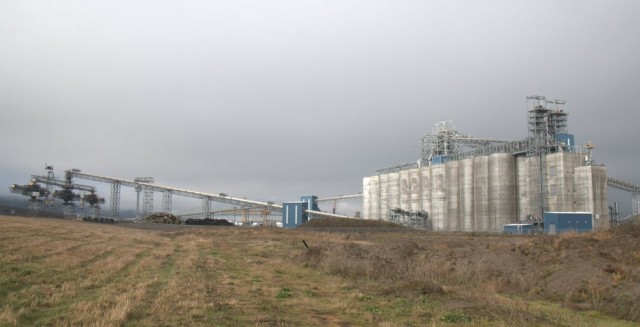 “Immediately upon execution of this Agreement, the ILWU Entities shall immediately cease all action directed against EGT (including, but not limited to picketing and any other form of disruptive activity), its partners, members, and their affiliates and employees, and anyone doing business with them, and shall actively discourage any other person or group from engaging in such activity. The ILWU Entities shall issue a written notice to The Daily News and the general public, including the Occupy movement, informing them of this settlement and urging them to cease and desist from any actions. . .”

The Portland Occupier recently ran an article entitled, “Occupy and ILWU Declare Victory as Contract Finalized with EGT”, and in keeping with the overly optimistic and misleading press releases generated by Occupy and some ILWU locals in regards to the standoff between the ILWU, Port of Longview and EGT, the article failed to accurately report the condition of the ILWU workforce and the agreement reached between ILWU, Port of Longview, and EGT. A free press being the cornerstone of any free people or movement intended to make people free, the facts should not be kept hidden because one party or another believes that the spin put out by public relations — i.e. convincing the people that a failure was a success — is more important than the truth.

Occupy and ILWU have some reason to celebrate for winning the battle against EGT, because they did win that battle, and its extent is of larger historical significance than most of us even realize. President Obama, following a hard-right anti-labor agenda, commanded the Navy, Homeland Security, and the Coast Guard to violate picket lines, and contractual agreements between the Port of Longview and EGT to escort a scab grain ship into the EGT terminal. The last time Federal troops have been ordered to intervene in a labor struggle was in the Postal strike of 1970 by President Richard Nixon. The potential for tragedy resulting from this order by President Obama could, if history is any guide, have resulted in the slaughter of working men and protesters at the hands of Federal Troops. This showdown was narrowly averted by the combined efforts of ILWU and Occupy to bring the crisis to resolution.

However, once the details of this “victory” are brought into sharp contrast, they don’t paint a very victorious picture. In order to understand the dispute, it’s important to take a look at how it began. The Port of Longview has a requirement in its lease (which EGT signed in 2009) that demands any businesses leasing facilities use ILWU labor. EGT signed one of these leases and then refused to abide by that term of the lease, instead choosing to contract labor out, hiring a rival union that agreed to less strict wage demands. For 70 years, organized labor in the Port of Longview has survived because of this requirement in Port of Longview leases. This requirement is what gave the ILWU the legal grounds to file unfair labor practice charges with the National Labor Relations Board and to join in the lawsuit with Port of Longview as a defendant in a suit filed by EGT.

Here’s is the new lease accepted by EGT in accordance with the terms of the current agreement:

“Warranty of Labor. Lessor [Port of Longview] warrants that, as of 4:00 p.m. Pacific Standard Time on January 27, 2012, there are no agreements or restrictions affecting the Port ,whether Lessor is a party to the same or otherwise, requiring (a) union labor or prevailing wage compliance.”

Without any such provisions requiring Union labor in the current lease, ILWU no longer has any legal reason to challenge the hiring of scab labor by EGT once this short term agreement reached by both parties has run its course (a maximum of five years). The use of ILWU by EGT is currently a “business decision” of EGT, which they can change at their sole discretion in the future.

EGT has made a business decision to directly employ employees performing Landside and Shipside work at the Facility, to integrate the Landside and Shipside operations at the Facility; to hire and employ individuals who have proven expertise and skill . . . The parties specifically state that EGT has not, by this Agreement or otherwise,. . .recognized any ILWU Entity as the collective bargaining representative of the workforce at the Facility, and that no ILWU Entity has accepted such representation. No such representation shall be extended by EGT, nor accepted by any ILWU Entity, unless and until lawfully proper.

What Occupy and the Longshoremen won was a “business decision” by the EGT to temporarily use ILWU employees. What was lost was 70 years of contractual protection of organized labor at the Port of Longview.

4 comments for “ILWU and EGT — The Victory That Wasn’t”