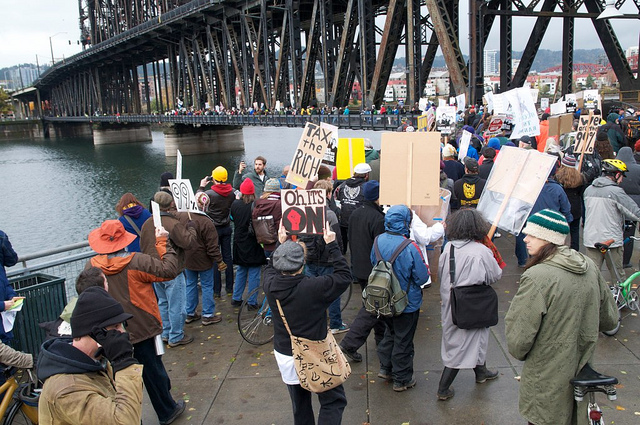 It’s the quirky bird that braids the words and that particular weave consists of the following trio. My observations oblige me to the Occupation. The history of the meshing is the tale I think I’m to tell and for that, we must return to the drama zone of the ACORN scandal, during my own dawning days as a blogger. As a newbie on a big political internet message board, I became something more than a spectator in the debate between the New York Times and prominent Los Angeles progressive journalist, Brad Friedman of the BradBlog. Brad called the longstanding media giant out for its failure to verify what was and wasn’t factual in a video’s content. The NYT would concede such a year later, but the damage was done and the Association of Community Organizers for Reform Now got defunded and ultimately closed its doors. I’ve recalled this a lot lately because it brings us to the second strand of my braid.

The Occupier asked recently for an article about the 10th anniversary issue of the Press Freedom Index. The annual issued by Reporters Without Borders assesses, compares and rates countries against one another for media accuracy and availability of alternate sources. The United States started in the top 20 at #17 that first year, but declines both sharp and steady during those long dark years of the Bush regime, dropping to #53 by 2006. We’ve since climbed back up the ranks near to our original position–until now. The freedom of the US press fell 27 places, sitting now at #47 and if that doesn’t sting enough, know that pain impacted for asking what I did–what about those cradles of democracy our government has us nurturing? Iraq is #152, Afghanistan #150…of 179 countries, double worse ouchy, eh?

I take in all that information and lay it against the back drop of that earlier experience, as the writer in me knows the two tales are entwined, but I want a local block of locks, as a tethering lace. Jobs with Justice took its second bus tour of the city’s most despicable bosses as part of its Portland Rising campaign advocating for workers of all kinds. The campaign launched last April in the Pioneer Courthouse Square declared an economic state of emergency for the massive message that was N17 by marching across the Steel bridge. Last week, a repeat performance of the bus tour from the summer outing of June 30th, and you can bet what’s left of your bippy, I had a ticket to ride on both occasions. This isn’t garden variety touring, but specific in its objective: to call collectively on management of businesses deemed to dodge process in negotiating terms and conditions with their employees. We dropped in on City Hall for parks maintenance workers, delivered a message for carriers at the post office and finished the day at the one place that required a second call, at Dosha Salon. More than half a dozen stops in a busy day extended by Puddletown’s finest who detained two busloads of people for more than half an hour in downtown peak traffic. While heading home I felt certain there’d be news coverage of some kind of the day’s activities.

A week out and waiting still.  As someone with ancient and limited training in the journalist’s realm, it’s pain to reconcile the awareness of principles that are said to apply to the profession with the posers who push propaganda for profit, rather than abide by the charter of public service that’s supposed to be the centerpiece of the calling.