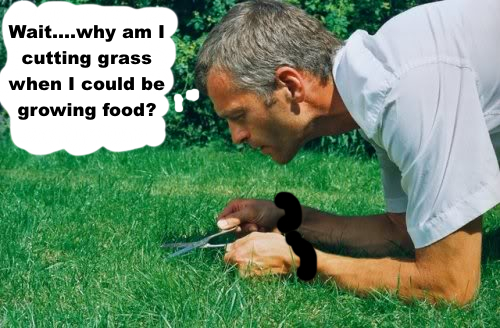 Hey you – yeah you. If you have any sort of lawn around your house, keep reading, lawnslave….

This is the first installment of “Good Shit with Illona”. At some point during the first few weeks of camp, I promised our dear and devoted Livestream watchers that I’d start a video segment by the same title. Well, I didn’t. I’m sorry. Instead I got stuck in the media tent updating the Occupy Portland website. But here I am to start telling you all about Good Shit. I’m going to talk about: seeds, plants, animals, manure, compost – in that order and going full circle. The circle is my friend. As colonized westerners we’re taught to believe in lines. We start at one end and move forward. We “move up in the world”, we meet “forks in the path”, we “bee-line” for our goals. The consequences of our decisions are to be avoided at all costs. The decisions we make are based on the history we’re taught. Well guess what? We’re taught some fucked up shit. And I’m here to unteach you that bad shit and instead bend that linear thinking into a circle.

Who cares how it started? Whether you believe creator, god, or the flying spaghetti monster put life here on earth, they sure as heck didn’t put humans on earth to end it. Even the most staunch atheist can agree that the most important role of life is to keep life going. And if we keep living the way we’re living, using our linear thinking, we will fall of the cliff like lemmings, and in mid-fall we’ll finally say to ourselves, “why didn’t we turn around?”

They have no beginning and no end. Nature works in circles. Beautiful, multi-layered circles of relationships that allow cycles and patterns to emerge, giving us a little breathing space between the chaos. The circle that I wish to focus on is the cycle of food. As a professional chef, farmer, and food activist, I’ve had the pleasure to take seed to plate to poo bucket, and to seed once more. It’s probably one of my favorite circles and I promise it won’t give you intestinal cramping if done right. So please, add The Occupier to your Google Reader and keep up with me as I take you through my favorite cycle.

This first installment is all about seeds and how absolutely non-sweat inducing it is to plant them, even if you’re still a lawnslave.

Step One: get rid of it. We are no longer a culture of lawnslaves. You know, those folks obsessed with “keeping up with the Jones’” spraying toxic junk and sweating every weekend just to have a perfect 3” green lawn… for what? So their tiny dog doesn’t get lost in the tall grass while it takes a shit that they’ll have to pick up later? So they can spray more toxic junk and sweat next weekend mowing it? Or worse, work an extra hour in order to pay someone else to do it for them? If that’s you, I know you’re better than that. You have intelligence, obviously, since you’re reading this news site. So divorce yourself from the lawnmower, the roundup, and some of your trips to the grocery store all in one swoop.

Try the lasagna method. It barely requires you to lift your shovel. It uses up your newspaper and cardboard, food scraps, raked leaves, and other bits lying around. And when it’s all over you can plant directly into it. I’ll (not) dig deeper into the lasagna method next week. But here’s a video for now for a quick introduction:

If you already garden and buy seeds at the store as an afterthought, stop it! The best seeds you’re going to find are ones acclimatized to Portland. Seed selection is a skill that we’ve culturally forgotten long ago. Now we rely on corporations like Monsanto to genetically engineer desired traits. Well guess what? They’re not doing it for our benefit. They’re doing it to control food production and we can’t let them get away with it. Learning to save seed has become more important than ever. It takes knowledge and an attention to detail. Those seeds your elderly neighbor has saved season after season? She wants to share them with you. And while you’re at it, have her teach you how to save seeds, too. And maybe next year you’ll save some seeds and exchange them with others.

That’s why it’s important for you to attend a seed swap. Or in Portland’s case, several. Having lived in Secwepemculecw, the interior of upper Cascadia, for several years, I was introduced to the concept of “Seedy Saturday” where friends and neighbors gather once a late winter Saturday to set up booths in order to exchange saved, acclimatized seeds, sell winter stored crops, honey, crafts, and exchange information about growing methods and sustainable living methods. I was fortunate enough to live near the original Seedy Saturday and was there as it celebrated it’s 16th anniversary. The Seedy Saturday phenomenon has now spread all throughout Canada. It’s time the tradition finds its way south of the 49th parallel. Portland has plenty of seed swaps but not the variety of events that a Seedy Saturday provides. But I promise to organize one for next year. In the meantime, come this Saturday to the NE Tool Library Seed Swap! 10-2pm at NE 20th and Killingsworth. Seed swaps are meant to strengthen the resiliency of seed genetics and the bonds of our community. Come and see how you can grow.

2 comments for “Good Shit with Illona: Why You Should Come to a Seed Swap”