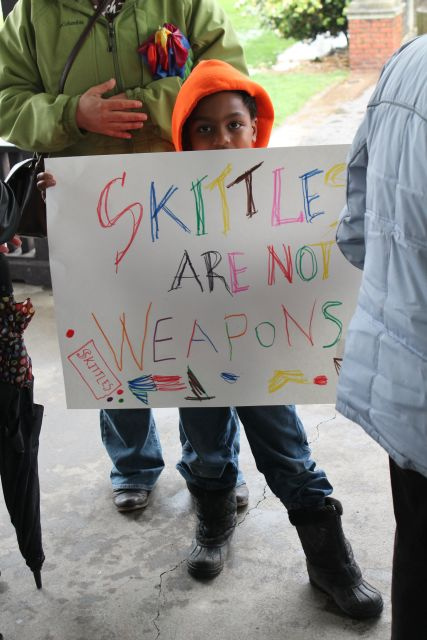 Continuing the nationwide outrage over the killing of Trayvon Martin, an estimated 200 Portlanders took to the streets from Peninsula Park on Saturday. The Trayvon’s Mothers March for Community Unity met for a rally and march at the rose garden gazebo.

The organizers and other speakers made it clear during the rally that Trayvon Martin is merely the latest young man of color to be killed for wearing a hoodie or “looking” like a gang member. This march was in solidarity with all the fallen and their families. One speaker was Fred Bryant whose son, Keaton Otis, was killed by 23 bullets fired by Portland Police in May 2010. Mr. Bryant related his daily battle with the fear that his other two sons might be senselessly put to death as well. Another speaker was Cameron Whitten, Portland Occupier and mayoral candidate, who reminded the crowd that the reason they were braving the rain was to make the world safer for their children, many of whom were there.

The ire of the attendees was further inflamed by news that on Friday an arbitrator found in favor of Ronald Frashour, who was terminated by the Portland Police Bureau in November 2010 for the January 2010 killing of Aaron Campbell.  The arbitrator’s ruling calls for the reinstatement of Frashour as an officer and the awarding of back pay.

Portland Police escorted and provided traffic control for the permitted march, which ran south down Commercial to Killingsworth then north on Albina and back to Peninsula Park. The marchers up front led the march in chants such as “What Do We Want? Justice! When Do We Want It? Now!” until a man named King Jay took over from the back of the march with chants that included “We’re All Fired Up”, “Can’t Take No More”, “Can’t Stand No More”, “Stop It!” and “Down with Zimmerman”.

A captured video stream of the rally and march is at www.opdxlive.org. 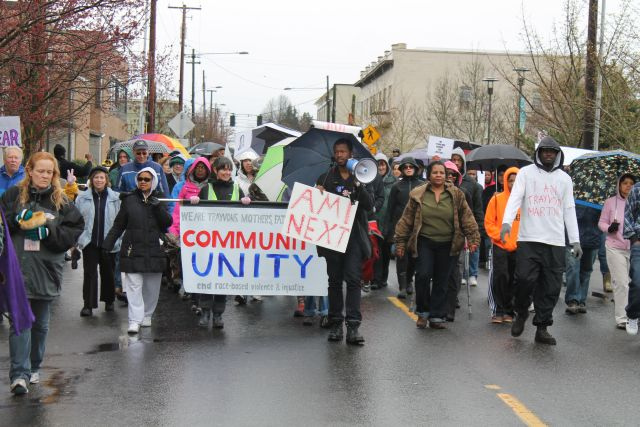