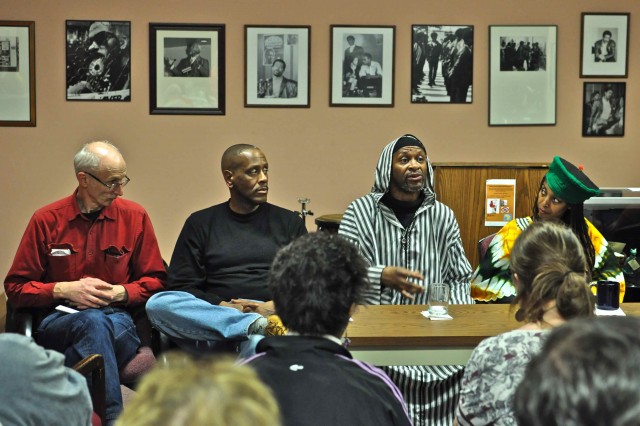 Don’t be afraid. Don’t let the cops, the sheriffs, and the banks intimidate you. If your house has been marked for foreclosure, fight back–don’t let them take it. Above all, don’t leave your home. There is an organized, energized, nationwide community that will stand with you to occupy your home.

This is the message of “Occupy Your Home: Race, Class and the Housing Crisis”, a forum held Saturday, April 7, at Talking Drum Bookstore.

Two websites are especially useful for people facing foreclosure. We Are Oregon is locally based, while Occupy Our Homes is a national organization. The resources on these sites include legal information, forms for filing complaints, access to support groups and flash mobs. For renters and those facing eviction, the Community Alliance of Tenants has information to help stay in your home.

Though the infrastructure is in place, more people power is needed for response teams–a large pool of individuals willing to be on call to quickly assemble and help occupy with an owner facing imminent eviction by the sheriff. Join the response team by filling out a form at Talking Drum Bookstore, by contacting the International Socialist Organization, or by registering online, at We Are Oregon.

The forum panel stressed that no one should have to endure foreclosure or eviction, nor is a lawyer’s assistance necessary. Retaining your home is not a pipe dream, they say, nor a future possibility–it’s DIY and it’s now.

Occupy groups in other cities are occupying empty houses and creating a national union of homeowners. In some cities, local sheriffs have declared a moratorium on foreclosures and evictions–the ultimate goal of the Portland group, which so far has managed to keep some people in their homes.

We Are Oregon and Occupy Our Homes are multi-racial groups that assist anyone dealing with foreclosure. Another group–Occupy Northeast: The Black Working Group is dedicated to helping African-Americans, who, according to JoAnn Hardesty, comprise 50% of all homeowners in foreclosure. They can be reached at [email protected], or 503-752-5112.

Panelists at the event, which drew about fifty participants, were Angelah Hill, Ahjamu Umi, Ibrahim Mubarak, and Jamie Partridge. Hill, who has fought foreclosure and remains in her home, discussed the ways she has resisted the system and intends to keep on resisting.

“We’re behind enemy lines. We’ve got to stand up,” explained Ahjamu Umi.  “There will be consequences; we know that. But right now, we have another sister who is reclaiming her house. So we have work designed to support her. And that’s how it’s going to go down for everyone who reaches out to us.”

Ibrahim Mubarak laughed, “I’m the three worst things to be in America: Black, homeless, and a Muslim.” Mubarak, the co-founder of Dignity Village, said he is associated with every organization in Portland that deals with houseless people. “We are social/political prisoners,” said Mubarak. “The police fine us $250 for sleeping on the sidewalk, and when we don’t have the money to pay those fines, they put us in jail and then profit from our labor. So we have to fight the whole capitalist system. But we’re waging that fight right now, and we’re not going to stop.”

Jamie Partridge, a recently retired postal worker and the Secretary of the Occupy Northeast Black Working Group, has lived and worked in the Killingsworth neighborhood for the past twenty-five years. During that time, he said, there has been a massive displacement of African Americans. “Fifty-three percent of black people who bought houses in 2006 have now lost their houses. Police terrorism is also an issue for us. But we’re organized now, and nothing is going to stop us.”

During the community discussion that followed the panel, several people who said their homes are scheduled for foreclosure, were repeatedly told, “You’re in the right place. Don’t leave your home. You don’t have to leave.”

Near the end of the meeting, some white people expressed a desire to fight back against racism. An African-American woman responded, “If we’re honest about building a multi-racial movement, we have to help white people know what it is to be African-American in America and in Portland. They don’t know it. That has to happen before a movement can be built. White people have to come with open hearts and open minds and say, ‘There are things I don’t know. Help me.’ That has to happen before a movement can happen.”

Theresa Sayles, who works as a community builder in Portland, suggested the following resources for those who want to be strong allies to people of color and help build multi-racial communities: