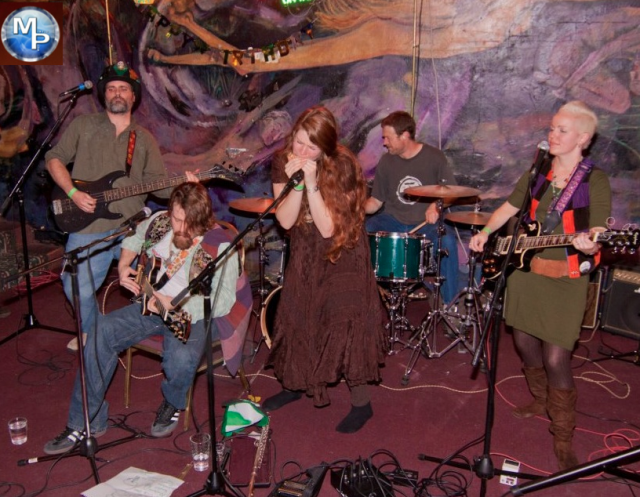 The Patchwork family band came together during the turbulent times of the Occupy Portland camp. Musicians from all over gathered together to write songs, providing the soundtrack for the revolution in the parks of Chapman and Lownsdale. Nary a bench lacked a guitar or harmonica to share the truth of the day in rhythm and measure.

According to Jackie Miller, a good friend of the band, “‘Boys in Blue’ is a song by Justin James Bridges about his experience of police brutality at the eviction of Occupy Portland on November 13, 2011. As a result of the attack, he is in a wheelchair and does not have full feeling or movement in his right hand or right leg. On Christmas Eve, he regained enough use of his thumb to pluck guitar and formed the band Patchwork Family with other Occupy Portland friends. Their upcoming album, “Beyond Eviction”, will be released on 4/20/12 and will be available for FREE download here. Occupier Jesi LoPresto put together the video.”

If you’re an Oregon medical marijuana cardholder, join the band at their CD release party on April 20 at 4:20 p.m. at the World Famous Cannabis Cafe, 322 SE 82nd Ave. If you don’t smoke–or have smoked too much to drum up the motivation to get a card–word on the street is that there’s another CD release party in the works.

4 comments for “Boys in Blue”