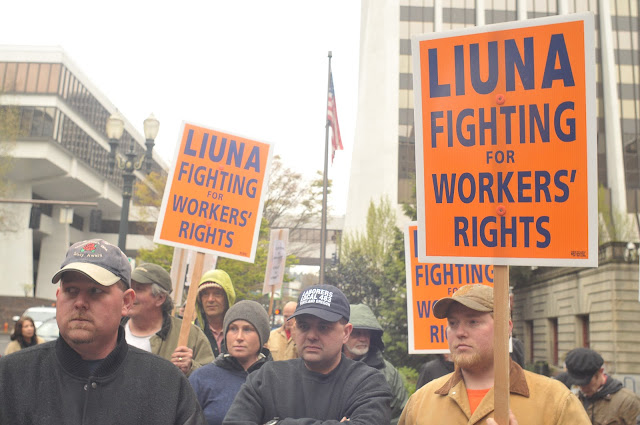 The recipe to combat looming budget cuts aimed at slicing away local jobs? Throw a bake sale. That’s what Laborers Local 483, which represents almost 700 City of Portland employees, did on Tuesday, April 17, outside City Hall. If the cuts go through, the job losses will impact all Portlanders–affecting street and park maintenance, as well as threatening the closure of recreation centers.

At the rally accompanying the bake sale, the crowd of roughly 75 heard about the public services that will be curtailed if Adams has his way. Everything from street resurfacing to snow removal, from clean park grounds and bathrooms, to clean water, and numerous other services people take for granted, may result in the unnoticed becoming noticed in jolting ways–say, running over a pothole, or having to find somewhere else to take your child on hot summer days because the neighborhood pool or community center closed down.

Clearly the monies from the sale of a few cupcakes will not fill the gap. They might not even fill a pothole. “We had a modest goal of $18.5 million, the amount the city plans to cut from the parks and transportation budgets,” said Richard Beetle, business manager of Laborers’ Local 483. “We knew we probably wouldn’t meet our goal by ourselves, so our plan was to send in delegations to the Commissioners’ offices and ask them to contribute to the cause.”

A group of five representatives attempted to deliver a cake to Mayor Adams. Featuring a city truck falling into a giant sinkhole (this actually happened in 2006), the cake read, “Rebuild Portland” and came with a “U-Owe-Us” card for 15 million transportation dollars. Unfortunately, Adams and his staff were not available to receive the yummy petition. Whenever they seek an audience with Adams, one of the representatives noted, the mayor and his staff are always in meetings.

City workers and community supporters also visited Commissioner Nick Fish with a chocolate owl, hand-crafted by a Parks worker facing layoff. Fish’s cake came with a note reading, “Give a hoot. Don’t give us the boot!” The delegation offered the treat to Portland Parks and Recreation for the bargain price of $3.5 million. 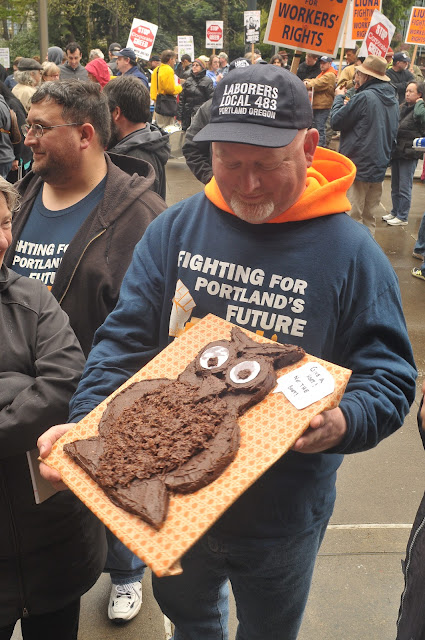 The budget cuts will literally and figuratively create more potholes. There are avenues that could mitigate the effects of these proposed cuts, or, for that matter, make them unnecessary. But Mayor Adams has explicitly avoided them. Echoing the bromides of many leaders in the U.S. and the European Union, Adams has been speaking the language of austerity. Instead of offering a plan to raise revenue in order to keep vital services intact–such as raising taxes on the 1%–Adams is talking about “significant program cuts” for the upcoming fiscal year.

The mayor has stated that he does not intend to make cuts to the police and fire bureaus, echoing the strategy of Wisconsin Governor Scott Walker, as he tried to divide and conquer public sector employees while promoting his American Legislative Exchange Council (ALEC) approved anti-labor budget repair bill, Wisconsin Act 10. This approach has the potential to do a double steal. For example, the police and parks bureaus are both funded through the general fund. Parks is already going to be defunded, but if the police are slated to lose ten officers and Adams keeps his word and doesn’t cut their budget, then keeping those ten officers would further dip into the general fund, perhaps at the further expense of parks.

Recent studies have shown that enacting austerity measures while refraining from raising taxes on the wealthy does nothing to help an economy. However, it does increase income inequality, funneling wealth upward, and also results in cuts to the social services that protect the vulnerable, a category whose numbers increase when governments enact austerity plans that result in laid off public workers.