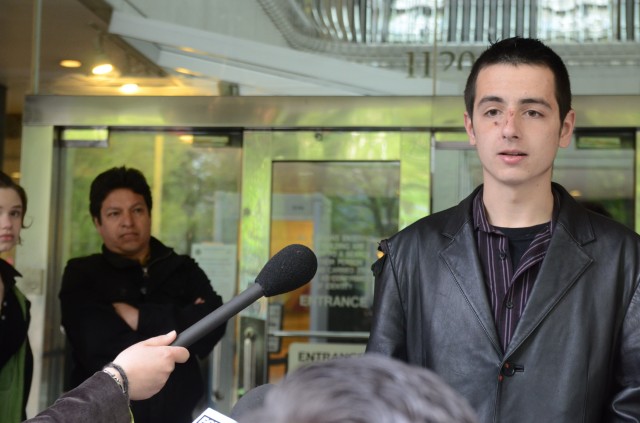 Members of the May Day Coalition and Portland Liberation Organizing Council held a press conference May 4th on the steps of the Justice Center in downtown Portland to denounce the police brutality perpetrated by the Portland Police Bureau during the May Day protests. Led by PLOC spokeswoman Kari Koch, representatives of six organizations spoke to the assembled press.

Marco Mejía from the May Day Coalition spoke against the violence and in support of Ricardo Varela, one of four undocumented students detained during a May 1 protest and who is still being held by ICE even after his other charges had been dropped. “The ICE Police and the local Police are cooperating as far as sharing information. What is happening is that people with no criminal record have been detained and deported, especially these young kids who came here, who grew up here, now they don’t have a future for themselves.”

Representing the Occupy Portland Spokes Council, Genevieve Goffman spoke of the many brutal responses of the PPB against members of the Occupy community since the eviction. A victim of the violence, Eugene Rya, appeared with scabs on his nose and face, a result of being pummeled by an officer of the PPB only 2 minutes after arriving to the Diversity of Tactics march at Broadway and Salmon. He recounted how he was attacked, with no warning, handcuffed and dragged into the street where he was beaten again. He was then retained in a police vehicle for five and a half hours with other arrestees. He was denied medical treatment during this time. He has been charged with Assault of a Police Officer, Attempted Assault of a Police Officer, Disorderly Conduct and Resisting Arrest, none of which happened according to Mr. Rya.

Below: video from May Day, showing Police Officers tackling protesters on the sidewalk, punching a woman and yanking her hair.

Jim Canright, representing the Elk Law Krewe, stated the support of Elk for those brutalized and arrested by PPB during May Day. “No one deserves to be brutalized by the police, especially for minor traffic violations.” Apparently more people were arrested in Portland than any other city despite a lack of damage or violence, other than that coming from the PPB.

Ahjamu Umi of the Occupy Portland Black Working Group spoke of the history of police brutality. “Dr. Huey P. Newton, the co-founder of the Black Panther Party, in 1967 said that police agencies are occupying armies in our community and it is no less true today. Not only for our communities but the Latino communities and the poor working class White communities and anybody that stands up for justice against this backwards system.”

Alice Paul, of PLOC, spoke to the hypocrisy of the city’s response to May Day. “After the eviction Mayor Adams said, quote, ‘It is my sincere hope that the movement, with its focus on widespread economic inequity, will flourish in its next phase, a phase where we can focus all our energy on economic and social justice.’ Yet when we rise up to fight inequity we are met with violence.”

After the prepared statements a few tough questions came from the press and were fielded by Kari Koch, the most pointed of which was “Why didn’t you just get a permit for the Diversity march, there were no problems in the main permitted May Day march?” The response was that permitted or not, the PPB has responded with violence. Folks have the right to speak and assemble, it is an individual decision to interact with the police, and it’s understandable that people would not want to do so considering the police have a history of punching people in the face.

It is also worthy of note that an Internal Affairs investigator with the Police Bureau was present at the conference, taking notes. 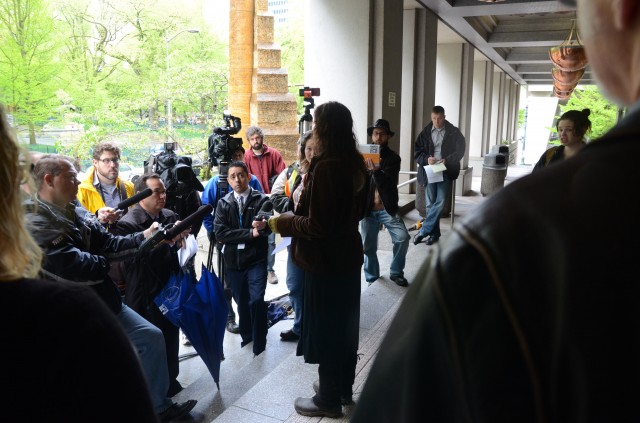 The press release distributed by the organizers follows below, in full:

On Tuesday, May 1st, the Portland Police Bureau violently attacked and arrested more than three dozen May Day organizers and protesters using a level of force that would be best characterized as brutality.

The organizations, groups, and coalitions represented below all actively participated in May Day marches, rallies, and liberations. Our members and supporters celebrated International Workers’ Day on the streets, in the parks, and from the sidewalks of this city. We condemn the brutal attacks on May Day protesters, and demand that all charges be dropped immediately. Permitted or unpermitted, official or spontaneous, all the actions yesterday were valid and important challenges to the real inequality and reinforced powerlessness we face each day. Let us be clear, we believe that all the people involved in the marches, demonstrations, and actions on May Day are part of the legitimate movement for social and economic justice – not just our members or those people participating in sanctioned actions. Our events may have been separated by time and space, but we are united in our condemnation of the violence perpetrated by the Portland Police Bureau. No one deserves to be brutalized by the police, ever, especially not for minor traffic violations such as jaywalking.

The actions of the police are part of a clear national trend towards increasing repression for what many of us consider to be the most powerful social movement in our lifetimes. Just as we are united with our fellow organizers across the country and around the globe, the Portland Police Bureau cannot separate itself from the continued acts of aggression of the NYPD or the Oakland Police Department. At a national level, we are being forced to fight for the already constitutional given space to speak our minds, and to make real the visions brought forward by proponents of the occupy movement and its related political universe.

As May Day organizers and participants we stand together in condemning the abuses of those who engage in repressive violence then hide behind “law and order.” The May Day repression is only the most recent example of the police violence that our communities face each day. The struggles around Trayvon Martin, Occupy, and May Day have brought to light what many know and live on a daily basis. Police in the US are a primary line of defense in maintaining the domination of the 1%. We stand with all of those who suffer under such a system – and we see no division between any who protested on Mayday, nor those hassled, beaten, incarcerated, and killed on a daily basis.

Unfortunately we already know that as simple community members and as working people, the Mayor and the police force are not naturally inclined to respond to our needs. We do not have the influence of the downtown Portland business community. On Monday the Mayor says “I’m focusing on foreclosure” and on Tuesday the police threaten people who are fighting against bank evictions and marching for workers’ rights. In the afternoon Sam Adams appears to hear the desires of students on the doorstep of City Hall, and that very evening the police force he purportedly commands attacks some of those same students with batons as they march through town.

The police distribute a memo to downtown businesses, or “clients,” assuring exceptional customer service on May Day. Clearly, the police bureau’s clients are those whom they prioritize serving and protecting, while those who are organizing for social justice are deemed as the dangerous and criminal elements in society. This is unconscionable, though not unexpected. The police have a long and storied history of repressing social movements in which they have protected the people and institutions that perpetuate the conditions that create social, economic, and political inequality while bringing violence into our communities.

Although not each of us was a firsthand victim of brutality at the hands of the police on Tuesday, we all feel the effects of fear and repression. When the police attack one member of our community, they attack us all.

We stand in solidarity with all victims of police violence and repression. We demand that all charges of those arrested on Mayday be dropped, especially those facing possible deportation. The actions of May Day may be finished, however, our movement lives on. Together, we will continue to be out in the streets organizing to dismantle the vast inequality of wealth and power in our country. We will not be divided.

6 comments for “Community Responds to May Day Police Brutality”