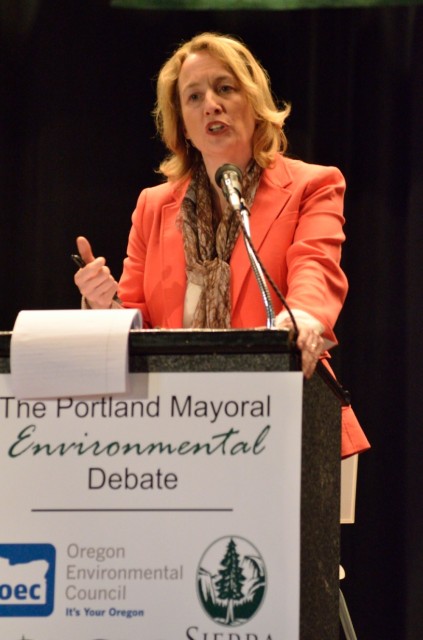 Hey Eileen, it’s Stephen. We spoke a few weeks ago on Earth Day. I’m writing to you because, to my great surprise, you recently brought me up at a mayoral debate on KGW TV (see the linked video at the 18:18 mark). A moderator with a haircut pepper-sprayed the candidates with a question: “How far would you go?” to stop protesters from exercising their constitutional rights on May Day.

Your answer surprised me. Why? Not because you suggested violating their Constitutional rights to speech and assembly (that was normal for you: asserting that both are illegal without special permission), but because you brought me up. And not only did you bring me up – you described me as a “leader in Occupy Portland”.

Aside from the obvious problem of naming leaders in a leaderless movement, I was taken aback by your characterization of me, our conversation, and our meeting. I am writing to set the record straight.

I called a meeting with you because at the Sierra Club’s Environmental Debate, I heard you say that we didn’t need government action to control toxic pollutants in our air – including benzene, which the EPA calls a Class A carcinogen, and which the Oregon DEQ says is 40 times higher than safe levels in Portland, representing fully one fourth of our risk of contracting cancer. This chemical is part of a larger picture, with every major toxic chemical between 10 and 40 times higher than safe levels. No collective action needed, you told the audience. We just need more people like Mary Peveto, who has been fighting tirelessly, and to unfortunately small effect, to get the iron foundry ESCO to stop poisoning her children’s air, and stop the kind of unnecessary pollution that made their school – Chapman Elementary – the second worst in the country for air quality, with toxic emissions including over a dozen known carcinogens, and a poorly understood class of hazardous chemicals known as endocrine disruptors.

Yes, all we need is more activists like Mary, who fought hard for years before getting ESCO to reduce their toxic pollutants by a meager 20%. (And if she ever marches in the street – have that Communist arrested!) Your celebration of this as a victory really took me by surprise, especially so given your background at Ecotrust. I immediately went home and looked at Peveto’s website, Neighbors for Clean Air. One of the first things I saw was a cry for help – a petition asking the state government to immediately investigate and stop toxic pollution that exceeds safe levels, and which disproportionately affects poor neighborhoods.

So I called a meeting with you, and I brought Mary Peveto to explain why activists can never cut enough deals to fix the problem. I also brought a spatial data systems analyst to discuss how we can re-organize the data we have so that the city would be empowered to take effective action. I also brought a friend who volunteers with me as an environmental advocate. For two hours straight, I watched you dodge questions, evade responsibility, and claim that the city is powerless to protect its citizens from being poisoned by toxic chemicals produced and released in the city of Portland.

Peveto was forced to strike a mediocre deal because she is just one person against a corporate giant. Asking her and people like her to “just keep fighting” is both condescending and offensive, especially if you want them arrested for actually fighting, or – gasp – asserting their right to direct democracy.

The city of Portland has an air toxins problem – it is going to require the full commitment of the city to address it, and to avoid the problems of free-riders, resource constraints, and all the other classic problems of collective action. No one gave these companies permission to poison us. And yet no one is going to stop them without the support of the city – especially people in poor communities (Peveto used to work for Nike and lives in Northwest – making it a bit easier for her to be taken seriously). That is why I called a meeting with you – to appeal to your conscience and to request comprehensive action.

When asked, I told you repeatedly that I volunteer with Occupy Portland, but that I have many involvements, and that I was only at the meeting to represent myself and my opinions. For you to turn around and take credit for meeting with “Occupy Portland leaders” is both deceptive and infuriating. And especially so given your incoherent views on civil disobedience.

Let’s talk about civil disobedience. When you met with Occupy Portland folks a few months ago, they asked you if you would arrest us if we blocked coal trains. You said “Yes! Isn’t that the point?”

We aren’t doing this to get arrested. We are not a cult of masochists.

Ghandi didn’t protest because he wanted to get shot.

Mary Peveto doesn’t do her work because she likes to negotiate with slimy men who ask how much poison is enough poison.

Activists make sacrifices because they have to. We occupy public spaces because they belong to us, and because we are entitled to take action to protect ourselves and our planet – just as you would, if elected mayor, be constitutionally empowered to take action that protects our “peace, safety and happiness” (Article 1, Section 1, Oregon Constitution). Yes – if you were to allow coal trains, they would probably be blocked. That’s because we want coal production, coal burning, and coal transport to stop – not because we hate trains, want to be hit by them, or because we like it when Daddy police officer administers gourmet food products in our eyes.

Also, as an interesting side note to your comment on coal trains – one of your spokespeople told me you subscribe to the “Thoreau theory” of civil disobedience, in which you secretly like protesters but also want them to be punished. I decided to go back and read Thoreau. Here is what he says:

“Men generally, under such a government as this, think that they ought to wait until they have persuaded the majority to alter them [unjust laws]… But it is the fault of the government itself that the remedy is worse than the evil… Why does it always crucify Christ, and excommunicate Copernicus and Luther, and pronounce Washington and Franklin rebels?” For Thoreau, the goal of civil disobedience is to win alliances on all sides — including from state officials (in his narrative, it was the tax collector). Thoreau would not support Gandhi getting shot. Neither would Gandhi. And no one in their right mind thinks that all protesters are some cult of masochists and martyrs. Please correct yourself on this, and let us know whose side you’re really on.

Judging you solely by your statements, you are not a friend to Occupiers. Among the major candidates, you have (arguably) the worst position on 1st amendment rights and Occupy Portland, outside of accused tax felon Charlie Hales. And you are not a friend to the thousands of people who see the failure of representative politics, and are ready for direct democracy. You are not a friend to the poor of Portland, who suffer from toxic pollution and greatly increased rates of cancer while you fight for starving their communities of resources with Urban Renewal Districts, and create idols to solutions with greenwashed office space (the “sustainability center”).

And so, with all due respect:

— Stop saying you’ll clear protesters off the streets in one week. That’s unconstitutional and authoritarian. Public parks have public uses. The public shall determine how its property is used.

— Stop saying an issue is critical and then refuse to take action on it, including, but not limited to, Portland’s toxic air problem. The mayor is a powerful figure – acknowledge your influence and own it. Learn about home-rule charters!

— Stop giving activists condescending support. If you can’t provide real solidarity with our actions, don’t bother giving lip service. It makes us wonder if you are a real friend or just a co-opter. Finally,

— Don’t name-drop us in the media and pretend to be our secret friends.

All this aside, I genuinely look forward to talking with you in the future, and to continuing this constructive dialogue.

Note from the author: The original version of this article made reference to a moderator with a “horrendous hair-cut”. After a second viewing, however, I have since relented, understanding that my real umbrage was not with the haircut at all, but with loaded questions coming from both reporters (the Oregonian’s Beth Slovic and KGW’s Laural Porter). I do not take issue with Laural Porter’s hair. In fact, I would say it looked rather nice, and was certainly more pleasant than the line of pro-police, anti-democratic questioning streaming forth from both reporters, which seemed to assume that the public needed to be restrained from public spaces, and that the only proper question is how much violence to apply, administer, inject, or sprinkle, in order to enforce arbitrary rules that violate our constitutional rights (which raises obvious questions of collateral damage, strategic hamlets, and carceral archipelagos – questions that currently remain unanswered.) I apologize to Laural Porter for engaging in this ad-cilium attack, and have removed the offending language.

12 comments for “How Far Would You Go, Eileen Brady? An Open Letter”