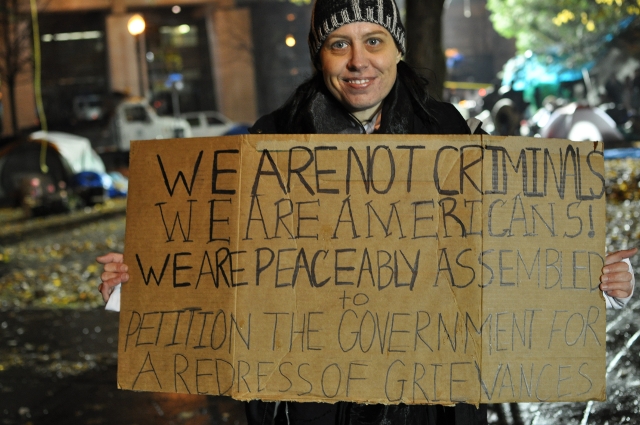 There has been much talk about attempts by various organizations such as the Democratic Party and some top officials in organized labor to co-opt Occupy in order to steer this movement in directions beneficial to themselves. Such attempts can hardly be surprising, given the use that many in the Republican Party made of the Tea Party people.

The 99% Spring is the latest effort by those close to the Democrats to take advantage of Occupy, but the results were less than spectacular. While they trumpeted attracting somewhere in the order of 100,000 activists to participate, the resulting demonstrations in various cities numbered only in the range of several thousand people.

But the Democrats and their operatives in Occupy have nevertheless had an impact. In particular, they have argued that demonstrations target banks first and foremost, not the government. Of course, sometimes targeting banks is appropriate.

However, there are times when the goals that Occupy has embraced would indicate that the most appropriate target would be the government and politicians, not the banks. Still, the Democratic Party operatives within Occupy push for demonstrations exclusively at banks.

California provides a typical example of what has transpired in many states and on the federal level. California’s budget has suffered chronic deficits for the past decade, thanks to the tax breaks the state’s politicians have repeatedly awarded the corporations. The politicians have then slashed funding to public schools from kindergarten to graduate school, resulting in the layoffs of thousands of teachers, overcrowded classrooms, and soaring tuition on the college and university level. And they have slashed social services, leaving some of the most needy and vulnerable people without help.

For those who want to defend quality, accessible public education and social services, the logical remedy is to place demands on the California government to tax the rich in order to raise revenue. After all, the politicians are the ones who lowered taxes on the rich and then insisted on an austerity program for the rest of us because they were broke. And in fact, Occupy Education of Northern California took that approach by endorsing a Millionaires Tax that one of the teacher unions (the California Federation of Teachers, affiliated with the American Federation of Teachers) initiated and was trying to get on the state ballot.

Nevertheless, when it came to deciding where to focus demonstrations to promote the goals of quality education and social services, those tied to the Democratic Party within Occupy Education argued that the demonstrations should take place at banks.

How does this approach benefit the Democrats? They derive two major benefits.

First, demonstrations at banks deflect attention away from California Democrats, who dominate the California government. The focus is taken off the politicians who have the power to set tax rates and allocate funding for education and social services, and it is diverted to the banks that do not legally have the power to do anything with their money other than maximize the interests of their shareholders. Placing demands on banks to fund education and social services is like demanding milk from a snake.

On the federal level, these bank demonstrations serve as a diversion from the most wrenching problems plaguing Americans: lack of jobs, unaffordable health care, and deteriorating public education. And the demonstrations take the heat off the Democratic Party for its refusal to launch a massive federal jobs creation program, its rejection of single-payer health care, and its willingness to cut Medicare and Social Security. As the Huffington Post (May 30, 2012) recently reported: “Who’d have thought it? Progressive stalwarts like Minority Leader Nancy Pelosi and Sen. Dick Durbin are pushing the same radical austerity plan as Jamie Dimon, CEO of troubled megabank JP Morgan Chase….”

But secondly, demonstrations at banks help the Democratic Party in a second, more indirect way. The Democratic Party is entirely tied to Wall Street. Obama made his pilgrimage there in order to win the support of bankers with all their money for his second election campaign. He has already accepted millions of dollars from Wall Street for his campaign.

Yet the Democratic Party, as well as the Republicans, has an uneasy relation to these financial institutions that occupy a commanding position in the economy. These institutions are led by the titans, the leviathans, who look down on the rest of humanity. As Lloyd Blankfein, CEO of Goldman Sachs, declared, they are doing “God’s work” (The New York Times, November 17, 2009). These people are not easily controlled. The PBS program Frontline (“Money, Power & Wall Street”), for example, pointed out that during the Great Recession, after the bankers had received trillions in taxpayer bailout money, Obama went to Wall Street to give an important financial speech and few of them bothered to attend.

In order in part to tame them, the Democrats like to pose as the bankers’ protectors. In March, 2009, at the height of the Great Recession, Obama told them: “My administration is the only thing between you and the pitchforks.” Therefore, demonstrations at banks can help politicians fortify their position in relation to the bankers by allowing themselves to pose as the bankers’ protectors in the face of an angry public.

Of course, in the final analysis, the politicians are responsible for virtually all of the bankers’ sins, at least those that are legal. Under Clinton, Glass-Steagall was abolished, which resulted in the bankers’ reckless gambling that produced the Great Recession. Politicians have allowed themselves to be lobbied by bankers to weaken Dodd-Frank, so that the whole mess can happen all over again, as the recent JPMorgan debacle hinted. They allowed themselves to be lobbied successfully by the bankers to kill a proposal that would have allowed judges to re-adjust home mortgage loan rates that would have prevented millions of people from losing their homes.

Some dogs can be vicious. But if kept on a short leash, they can be prevented from harming others. When they are off leash and cause harm, the owners are legally responsible, not the dog. Until Occupy starts focusing on the deeper causes of our problems and not just the symptoms, the problems will persist.

6 comments for “How the Democrats Exploit Occupy”