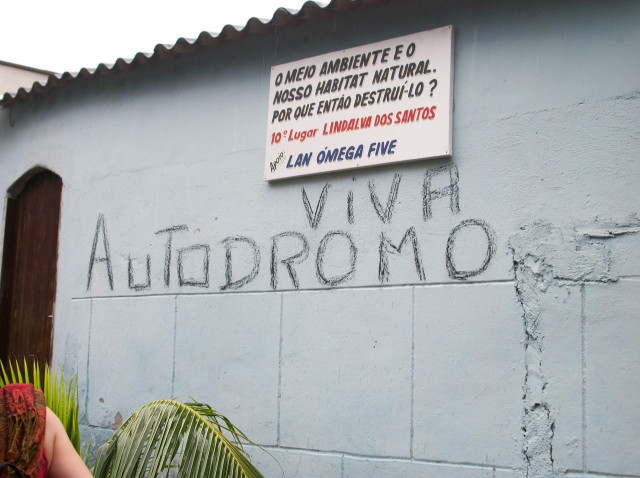 On Wednesday I toured a community call Autodromo that is facing gentrification from the 2016 Olympics. Autodromo is a favela on the outskirts of Rio de Janeiro that has existed as a home since 1967. A favela is simply a community that lacks basic infrastructure, is steeped in poverty, and doesn’t receive support from the government. Currently favelas in Brazil are under serious attack from the government because of Rio+20, the World Cup in 2013, and the Olympics in 2016. The government is militarizing these neighborhoods with the public intent of decriminalizing these spaces from the drug lords, but with the actual agenda of displacing and repressing these communities in advance of the attention that Rio is receiving from the global leaders in the next few years.

In Autodromo, the government has announced that they will destroy this community to build condos to house people during the Olympics. What are these families to do? Well, the Dilma administration does not consider that their problem.

The communities are rising up in the case of Autodromo to push back on gentrification and destruction, utilizing the numbers and power of the social movements in Rio right now, attracting the attention of the international press.

During the demonstration, the path of the march in support of Autodromo was blocked by tankers, militarized police, officers with rifles and shields. They did not allow us to pass and the local community did not try to push past.

Brazil is a clear example of the destruction of capital. Brazil is developing from the Third to the First world and the increased development is exacerbating the vast distribution of wealth and power. We see it manifesting in the favelas, in the militarization of traditional communities, and of the commodification of the natural resources at the expense of the needs of the people. 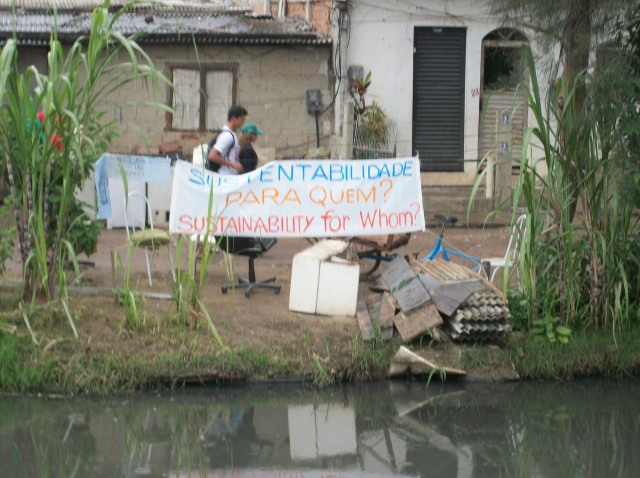