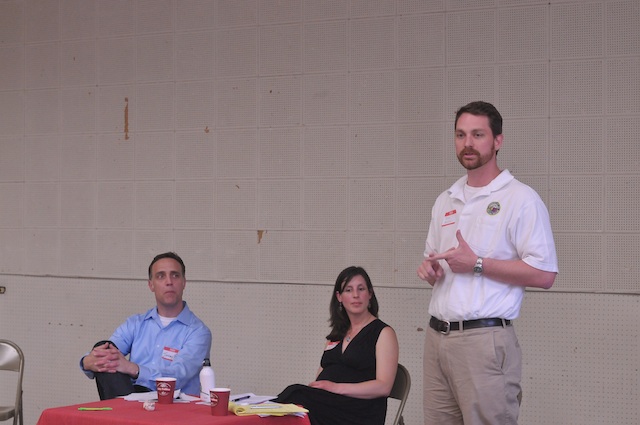 Jeremy Hays of Green For All and Clean Energy Works Oregon, Jana Gastellum of the Oregon Environmental Council, and Ben Nelson of the Laborers International Union of North America. Photo by Pete.

Labor unions and environmentalists have sometimes been at each other’s throats. A workshop on jobs and the climate held June 20 at Musician’s Union Hall in Northeast Portland was about building common ground and strategies for the two groups to work together for some shared goals, as they did when their cooperation nearly resulted in the passage of the 2009 climate bill that fell one vote short of cloture in the Senate.

According to Jeremy Hays of Green for All and Clean Energy Works Oregon, the 2009 climate bill came as close as it did because labor, environmental, community, and economic justice groups worked together to craft a bill to create high quality jobs for people locked out of the old economy. There were over fifty votes of support in the Senate and that one vote margin, according to Hays, was too close for comfort for the various industries—think coal and oil–that stood to lose if it passed.

Think tanks such as the Heritage Foundation began a campaign to “destroy the myth of green jobs”, by fomenting suspicion as to the existence of these jobs. Where were the jobs? They had been promised, but they were nowhere to be found. The implication, said Hays, was that the jobs would just “knock on your door.”

Such propaganda, in combination with the faltering economy, proved effective. Fractures developed between groups that had been working together, reaching an apex with the Keystone XL Pipeline–with most labor groups supporting it for the jobs it would provide, and environmentalists opposed to the devastating climate changes that would result from acquiring, refining and, ultimately, using tar sands oil.

Furthermore, the oil and coal industries, as well as other industries that would suffer from legislation acknowledging climate change and its impact on our ecosystems, used deception and outright lies to change public opinion. The number of people who support Congress enacting climate change bills has dropped from 30 to 17 percent since 2009, and the number of people who currently believe in climate change also has decreased. That latter statistic is particularly alarming, because it is an opinion regarding a phenomena born out by science:  Like gravity, climate change exists, whether or not one believes in it.

Hays does, however, see reason for optimism. While noting that federal level solutions seem hopeless, the story is different when you talk about people’s backyards. “When you can create a picture,” he said, using examples such as railroads and retrofitting homes for greater energy efficiency, “people get behind it.”

Jana Gastellum of the Oregon Environmental Council and Ben Nelson of the Laborers International Union of North America fleshed out some of Hays’ points. Gastellum began by emphasizing that the amount of carbon dioxide in the atmosphere just reached 400 parts per million, and that at current rates, it would reach 500 ppm in 40 years–well above the rate at which the climate acts within predictable parameters. In Oregon, this change in climate will impact our air and water: The mid-level snow-pack upon which Oregon depends for its summer water supply will be diminished, and the increase in temperature will result in poorer air quality.

One important consideration Gastellum noted was the need not to just get rid of the bad, but to “replace bad stuff with good stuff.” As an example Gastellum cited the 2009 Clean Fuels Program that requires Oregon’s “transportation fuels become cleaner and 10% less carbon intensive over time” and “creates demand for sustainable biofuels, electric vehicles, natural gas, and other clean, low-carbon fuels.” Oregon spends $5.5 to $6 million on imported oil, but, according to Gastellum, the Clean Fuels Program takes money leaving the state and invests it here, creating more jobs associated with these alternative fuels.

As she yielded the stage to Nelson, Gastellum asked the crowd to consider that “the forces discrediting unions are discrediting environmentalists.” Bruce Dennis, former president of Carpenters Local 247, asked rhetorically, “Think it could be corporate America?”

Nelson began by stating the need for “viable options for workers.” He then spoke about the high unemployment numbers among many union workers–up to 50% in some cases–and the results of these numbers, including home foreclosures and lack of healthcare. According to Nelson, what is needed is “creating good options for working folks.”

As an example, Nelson used the Clean Energy Works Program, a non-profit that brings together rebates, incentives, financing, and contractors to help make energy efficiency upgrades easy. Within the past year, 1,600 Oregon homes (out of a goal of 6,000) have been retrofitted.

Of particular importance to programs such as Clean Energy Works are Community Workforce Agreements. These agreements assure that, in the case of Clean Energy Works, the retrofitting provides “good, sustainable jobs that create higher wages and benefits.” Going even further is the High Road Contractors and Community Alliance (HRCCA), an alliance of community organizations and local weatherization contractors that pledges to hire a diverse local workforce at a living wage .

All three speakers emphasized the importance of setting aside labor and environmentalist differences, focusing instead on points of agreement. To discover these intersecting interests, people must talk with each other and “learn each other’s stories and find out what moves people.” And we must make “real long standing commitments.”

One glaring absence from the forum was the mention of capitalism. While a green economy is certainly a step forward–providing jobs that have less environmental impact than the petroleum based economy of the past century–it  remains an economy based upon the belief that the only good economy is an expanding economy. Even though it proposes the use of alternative energy sources, those sources will be yoked to feed our seemingly insatiable appetite for energy and thus continue exploiting the Earth in an ultimately unsustainable manner– as if we exist independently of it. Additionally, it remains an economy that values profit and property over people, rather than one that births, sustains and nourishes us and all life, as the Earth does.

Perhaps this is an issue for another time, but, as everyone at the meeting seemed to agree, time is short.