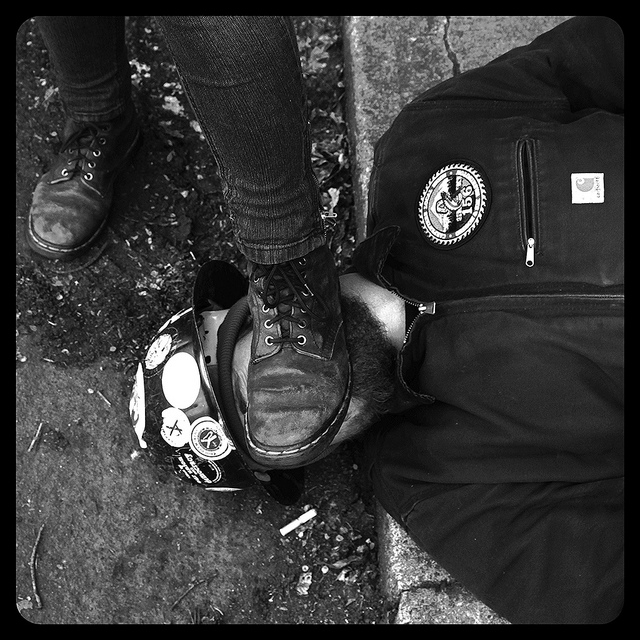 photo by I. McBee

All working people should pay attention to the egregious assault on union democracy happening in the Pacific Northwest Regional Council of the Carpenters Union, covering all Carpenter’s Locals in Oregon, Idaho, Washington, Wyoming, and Montana.

The United Brotherhood of Carpenters has a proud history and should take immediate action to overturn a recent Regional Council decision that disciplined innocent, union-dedicated Carpenters with fines and a loss of membership privileges. Those punished included twelve Carpenters who had recently won elections to lead their local union – mega-Local 156 of Oregon and Southwest Washington – and many regional delegate seats. The newly elected President and Vice President of Local 156, as well as the other newly elected officers on the slate, are now facing fines up to $1,500 and six years of stripped membership privileges. (Note: All Carpenters interviewed for this article chose to remain anonymous, for fear of further retaliation).

What were the crimes of these long standing union Carpenters? They held a “get out the vote” phone bank. For this they were charged with:

1) causing dissent in the ranks 2) failure to uphold the union oath 3) defrauding the union.

The real crime of the convicted Carpenters was that they ran a well-organized election campaign, promising to reform their union on a pro-democracy basis, and they won.

Their campaigns succeeded because they reached out to the union rank and file at work sites, while campaigning to fight for more democracy and transparency in the union and, more importantly, to fight for better contracts in the face of employers attempts to reduce the membership standard of living. The reform group raised all of their funds from rank and file Carpenters at work sites.

Turmoil had been simmering in the Regional Council for quite some time, since century-old Carpenters locals throughout the state of Oregon and Southwest Washington were shut down and merged into a “mega-local,” which was done in a way that restricted the democracy previously enjoyed by the smaller locals.

For example, since their local offices closed, rural Carpenters who wanted a union voice were forced to drive hours to attend a meeting. Statewide decisions were centralized, limiting Carpenter access to decision making process on the local level. The connectedness that Carpenters felt to their union was removed by hundreds of miles; their personal investment in their union was forcibly made impersonal.

The “mega-local” phenomenon has been a virus running throughout organized labor for years, creating predictable effects. Reform-minded Carpenters saw this happening in their union and fought back.

This restriction of democracy was also occurring at the Northwest Regional Council of Carpenters, which had centralized power over the encompassing states through the Council’s ability to appoint business agents, staff organizers, and bargain contracts. Instead of the union fighting the employer for better wages, the Regional Council talked endlessly about “partnerships” with the boss, which came at the direct expense of Carpenter wages.

There is no evidence that the convicted carpenters did anything wrong. In fact, they have federal labor law on their side. The Labor-Management Reporting and Disclosure Act of 1959 (LMRDA) was created to give basic democratic rights within all labor unions and covers basic standards for union elections and free speech rights. (An excellent book on the interesting history of the LMRDA is Rebels, Reformers and Racketeers by Herman Benson.)

The accused Carpenters used these rights by campaigning and winning elections in their union. Unfortunately for their accusers, a “get out the vote” phone bank is not against any Carpenter rule, nor against federal labor law.

Staff from the Regional Council falsely accused the convicted carpenters of “stealing” the Carpenter’s membership list — with no evidence — and proceeded to slander them to the membership through a website and numerous mailings, calling the accused “thieves” and “liars”– unacceptable behavior in any union.

After losing the election, the displaced leadership complained to the Carpenters International and a second set of elections was organized. The reform Carpenters won that election by a larger margin. Now, the candidates they defeated are trying to get them out of office using internal charges, based on the phone banking “scandal.” The LMRDA does not allow unions to target activists using vague accusations like “causing dissension.”

Dissent simply means disagreement, which is perfectly normal and natural in every union, and one of the expressed protections conferred upon unions by federal regulations. Also, “dissent” is an overly broad concept that, in this case, infringed upon the Carpenter’s federally protected free speech rights, making the convictions illegal.

Perhaps the best evidence of the lack of merit in these Carpenter conviction was the composition of the jury that decided their fate. The Carpenter’s “trial committee” is supposed to be a standing (ongoing) committee comprised of regional delegates, picked by lottery; however, for this trial the standing committee was abolished, replaced by a new one.

The injustices committed against these carpenters negatively affects all unions, since such undemocratic practices look horrible to the general public, and provides anti-union groups with easy ammunition.

The convictions also weaken the Carpenter union directly, since many of their hardest fighting pro-union members are members without membership rights. A weakened Carpenters union consequently weakens labor as a whole.

The convicted Carpenters are now appealing the verdicts to the Carpenter’s International, which has a chance to right a wrong, as well as a legal duty to strike down the above violations and reinstate the Carpenters’ membership rights and restore their elected leadership positions.