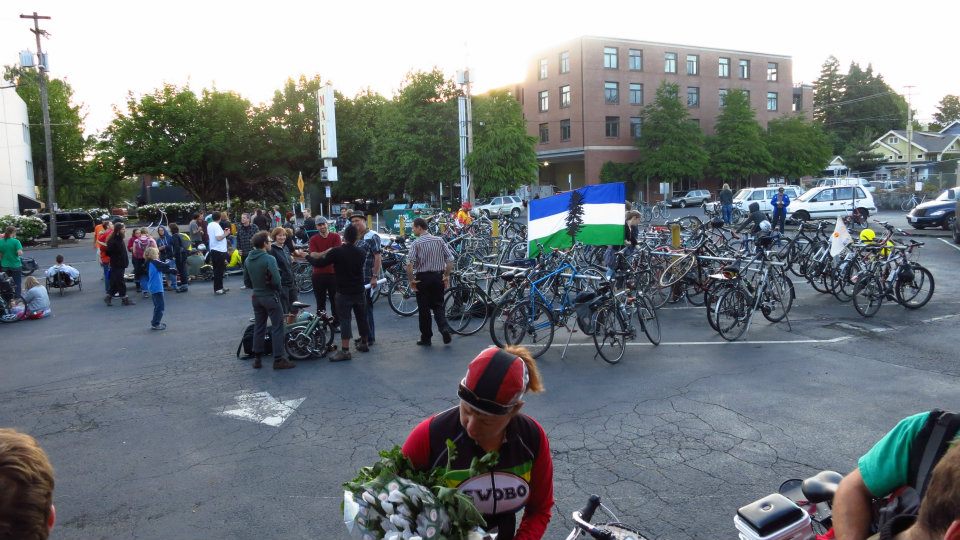 The Cascadian flag attached to my bicycle looks like a big blue, white, and green jib as I join about one hundred others in the kick-off to Pedalpalooza on June 7. I fly the Cascadia flag from my bicycle because it gives me hope. Instead of telling people that I live in the Pacific Northwest, accepting that we are just part of a bigger nation on a crash course to mass suffering, I hold out hope that we are exceptional. That if enough Cascadians all agree that private cars, massive highways, far flung suburbs, and constant, thoughtless consumption are unsustainable, then there may be a chance we can save ourselves from the coming hard times. There are so many people living in Cascadia who despise government policies created by corporate interest. So many who would rather see their tax dollars taking care of their neighbors rather than providing access to cheap gas through never-ending wars. In a country of helplessness, I hold onto hope that we can indeed gain sovereignty over our land, our water, our economy and our bodies.

As we ride, fellow cyclists are curious about the flag, and so I take every opportunity to engage in conversations about Cascadia. The question I hear most often is, “What is that flag?” or, “Is that the Lebanese flag?” My typical response comes out as, “This is the flag of our bioregion, Cascadia. It stretches from Southern Alaska to Northern California, from the Rockies to the Pacific. We are creating a new culture here, one where people believe in equality, community, in respecting nature, natural boundaries, and acknowledging our place in the ecosystem.”

I say this to myself, because I so badly want to believe it. The small circles I run in allow me to pretend that all of Cascadia is awash with people who share my values. The reality is that Cascadia is filled with plenty of ignorant people as well. They were raised to hate people of a different skin color. Raised to work two or or three jobs a day without considering their enslavement. Raised to think they live in the greatest God-blessed nation on earth, while making sure to acquire the luxuries that commercials expect of them. Thankfully, ignorance has a cure: Understanding. Gaining an understanding that we cannot continue to live in ignorance of our relationships to those around us and the earth. That our actions have deadly consequences. Gaining that understanding is our only chance for survival.

Another cyclist pulls up to me to inquire about the flag. After going through my spiel, he tells me that he has just returned from Europe where he was fired from his Climate Change research job. “It’s too late,” he says. “The damage we’ve done is irreversible.” He throws some data at me about how by 2025 half of the land on earth will have been changed by humans. How famines will wipe out millions in the coming years.

Usually, I’m able to deflect this type of news with a hard shell of, “Here in Cascadia we’re doing something!” But this time I let the sadness attach itself to me. As I read this week’s stories on studies coming from UN scientists and papers published in NATURE, I have a hard time feeling hopeful. They warn of apocalypse and offer no sound solution other than “change our habits.”

Changing the habits of 300 million Americans is a daunting endeavor and I wish those willing to undertake it all the luck. Changing the habits of 15 million, many of whom already have begun to shift their consumption feels more possible. I hold out hope that we, Cascadians, can provide an example of ecological and social sanity in an insane world, before it’s too late. To me, the flag is a symbol of this sanity – a move from anthropocentrism to biocentrism.

For more information on Cascadia,to join your local chapter, or start a new one, visit http://cascadianow.org.

3 comments for “Cascadia: Is There Hope?”