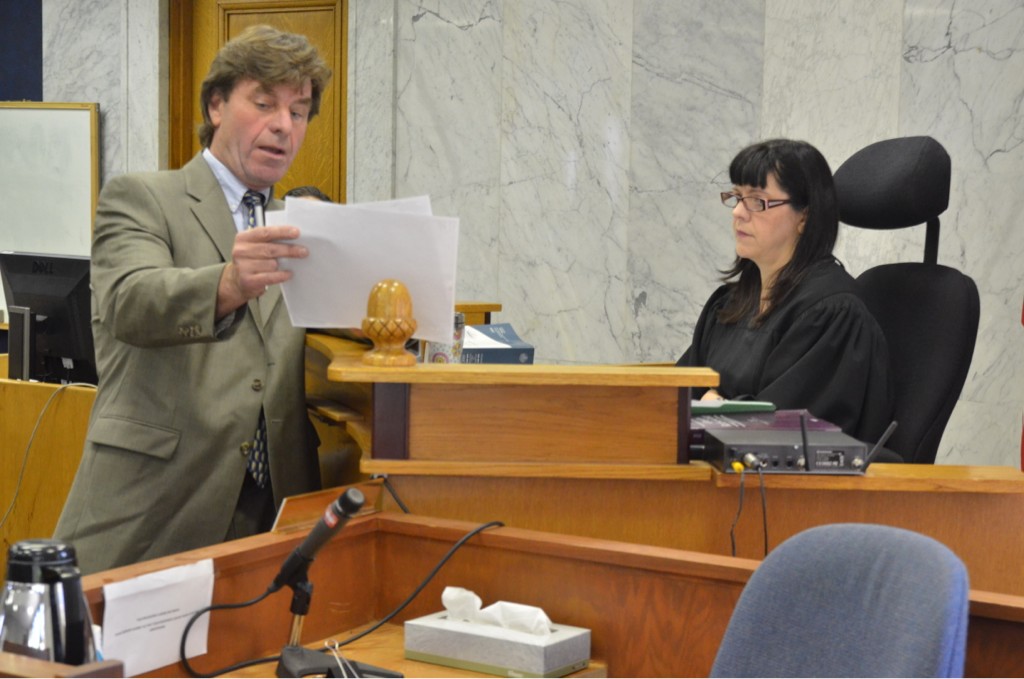 The afternoon of Friday, July 6 was yet another hearing for over seventy activists arrested at protests ranging from October 13 to May 24. All the defendants’ charges were dropped to violations which, in Multnomah County, denies them access to court-appointed attorneys and jury trials.

The afternoon began unhappily when the judge announced her ruling against our motions challenging the basic constitutional validity of city ordinances regarding park closures and curfews—ordinances that were the reason given for most of the arrests. She hasn’t finalized the written opinion so we don’t yet know the rationale of the decision. The constitutionality of the ordinances as applied (as opposed to their facial validity) can still be challenged at trial.

Then the struggle continued to get the District Attorney’s office and the Portland Police Bureau to comply with the judge’s earlier discovery order. The deadline for discovery materials to be turned over to the defense was originally set for June 18. After that deadline passed, the PPB said they would turn everything over by June 27. At that time they turned over some of the material, but requested that other material be given to the judge instead for an “in camera review” to determine whether or not the material qualifies as “work product” and is therefore exempt from discovery. The judge conducted the in camera inspection and filed the documents that she deemed qualified for the work product exemption under seal, in case of appeal.

The discovery materials are in the form of video, audio, photographs, and documents. Defendants and defense attorneys charged that the videos they’ve been able to obtain from the DA’s Discovery Office appear to be an incomplete collection of short clips, suggestive of editing. Deputy DA Brian Lowney responded that the short clips are the only video in existence and that there is no continuous raw footage being withheld. Defendant Jimmy Tardy questioned how this is possible, since police videographers would have to know to turn on their cameras just before any action happened. Lowney was not required to answer. Lowney did say that his office had received five more video clips from the PPB that day, just as the hearing began.

Defense attorneys argued that the written discovery materials also appear to be incomplete. For example, they refer to other reports that were not turned over. They also include a reference to a police informant in the Occupy camp, but no other documentation on informants appears despite the specific inclusion of any such documentation in the discovery order. 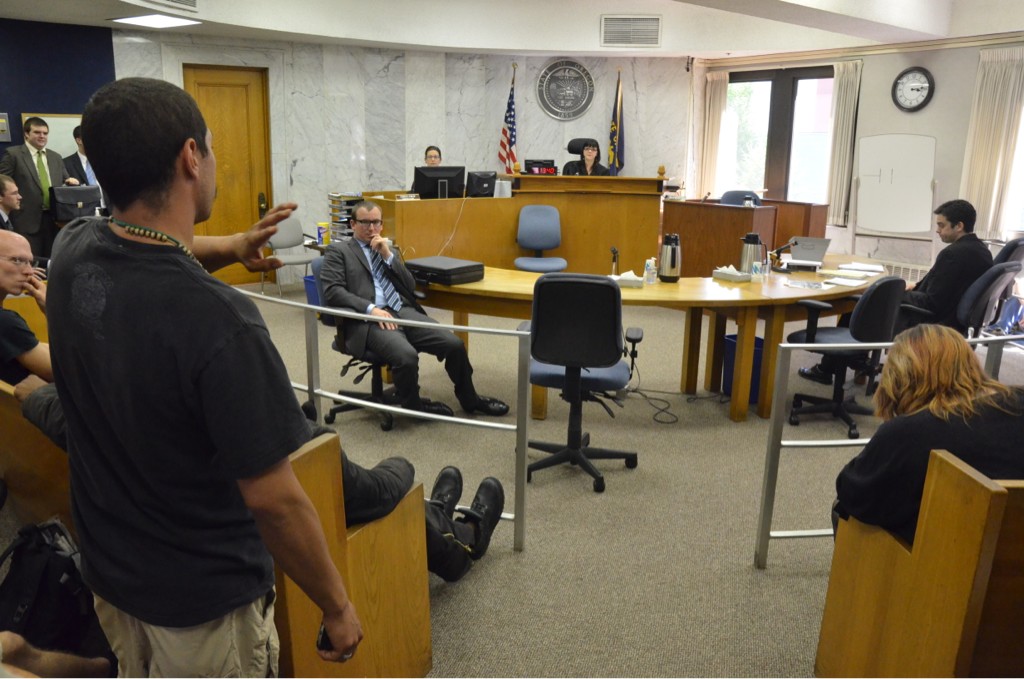 Attorney Robert Callahan pointed out that for his client Cathy Alexander, arrested at Jamison Square, there were 26 videos available, at a cost of over $800 to the defense. Yet for the arrest of his client 81-year-old Jack Mongeon, brutally arrested at the Chapman Park eviction, he was told by the Discovery Office that there were no videos at all. Lowney responded that “if that’s the case” there must have been some “miscommunication between our computers and the Discovery desk” because there are actually seven videos associated with the Chapman Park eviction, including the two turned over by the PPB that day, according to Lowney. Attorney Kenneth Kreuscher said he has video evidence of three police cameras at his client Liz Nichols’s arrest at Chase Bank on N17, yet only one video was turned over by the PPB. Callahan asserted that the DA has the responsibility to proactively assure that the PPB has turned over all the required discovery material, and that the defense is in the uncomfortable position of “having to accept the word of the police department, through the prosecutor, as to the existence or non-existence of this video.”

When defendant Michael Withey loudly muttered something about “covering up police brutality,” Albrecht expelled him from the courtroom.

Callahan made a new discovery request for the property room check-out logs and the names of officers assigned to do video at each arrest event to help ascertain the existence or non-existence of video. Albrecht declined the request, though she said it might be subject to subpoena. She set yet another discovery deadline of July 13 for the DA to make sure all the videos are actually attached to the relevant cases. Albrecht has yet to rule on another motion to dismiss all the cases due to the continuing failure of the DA to turn over discovery before the multiple deadlines that have been set.

At $31 per DVD, copies of the video evidence are also inaccessible to many defendants, which has been an ongoing sore point. Lowney offered to arrange in-office viewings for defendants who couldn’t purchase the videos, but this denies the opportunity to slow down, zoom in, or improve sound or video quality for close inspection. Defense attorney Troy Pickard had offered to make copies of all the video discovery available to defendants via the internet, but Lowney failed to respond to his messages and then announced at the last hearing that the DA decided on a policy of not turning the video over to Pickard since he’s not a representing attorney on all the arrest events.

Therefore, attorney Kreuscher argued a motion regarding the discovery statute, which requires that defendants be given the opportunity to “inspect or copy” the material, not an opportunity to purchase it. Although the existing practice has been to sell it to defendants or give them the opportunity to view it in the office, Kreuscher pointed out that existing practice cannot overrule the intent of the drafters of the statute. The DA’s office has yet to provide any rational basis for their policy, or for the excessive cost of the discs. The issue could have important implications under the 6th Amendment. Judge Albrecht said she would issue a ruling by next Friday.

Since at least February, Albrecht has been asking defense attorneys what further pre-trial motions they anticipate filing and they continue to answer that they can’t possibly know until they’ve received and inspected all the discovery. Attorney Lee Berger said he was sorry the defense was filing so many pre-trial motions, but it wouldn’t be necessary if the judge dropped the charges, to the enjoyment of (almost) all. Now the defense anticipates needing three to four weeks from the latest discovery “deadline” of July 13 to file further motions. The judge optimistically set a deadline for defense motions to be submitted by July 30, with the State’s reply due August 13. The next hearing in the cases will be Thursday, August 16, 9am, room TBA.

Albrecht proceeded to set some trial dates, despite the delay and uncertainty around discovery and further pre-trial motions, citing her constitutional obligation to provide a speedy trial. Trial dates were set as follows:

Trial dates for other arrest events will be proposed by attorneys by email and set at the next hearing. When a defense attorney pointed out that a proposed date for her client’s trial was Yom Kippur, Albrecht caused an uproar by replying, “Well, the courts are open.” Defense attorneys cited First Amendment protection of religious freedom and eventually Albrecht said she would consider a specific request for another date, which the attorney then made and the trial date was altered.

Albrecht said that adjustments will be made to trial dates for good cause shown, similar to the policy for misdemeanor trials. Any defendants who cannot make their trial date should contact their attorney, if they have one, or call the ELK hotline at 503-902-5340 as soon as possible.

2 comments for “Hearings for Occupy’s “Speedy Trials” Drag On”