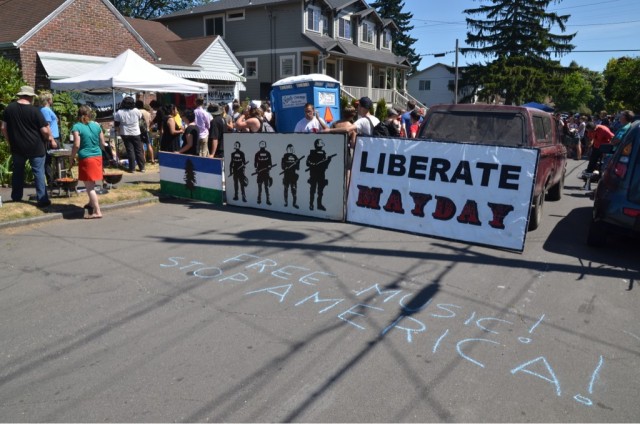 On May Day, local housing rights activists, including many Occupiers, helped Alicia Jackson take back her NE Portland home. Next door to Jackson’s house a duplex was under construction, which – unbeknownst to many of those helping Jackson – was being built on land that also had belonged to her. 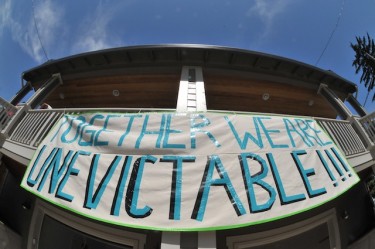 At yesterday’s Block Party in celebration of the ongoing defense of the homes of Jackson and Annette Steele attended by over 200 people, the community took back the newly finished duplex, thus expanding the idea of defense to encompass a philosophy opposing gentrification. The duplex will serve as a community center that will not only provide services for the community, but will also be a base of organizing against gentrification and police violence in the neighborhood.

Standing next to a banner reading “Together We Are Unevictable,” Jackson opened the door to the new community center at 12:27 pm, effectively christening an empty house a community home. Soon people were being given tours of the building and encouraged to offer ideas ranging from landscape to use of interior space. Out on the street, sharing a potluck, others reflected upon a remarkable three months and shared future hopes. It was a lively day of camaraderie, entertainment, and rousing speeches, particularly from Jackson and Steele.

Grace Schoenlank was impressed with the turnout and optimistic about further gains. “People are building community from the ground up. This is incredibly important. We need to do more of this. We need to be getting out in the streets, making more community centers, and working with long-time residents.”

Claire Flanagan hoped the center would be a place where “we can build something vibrant and loving.” Seeing Jackson, Steele and the community center, as “part of the larger Take Back the Land movement,” she noted that although large numbers of houses stand empty, many people remain houseless. In the future, Flanagan said she’d like to see “more of the community driving the takeovers, more openness in the organizing community, and more outreach to building community. This will hopefully allow for more housing takeovers and better organized communities that can defend themselves and demand their rights and fair treatment.” 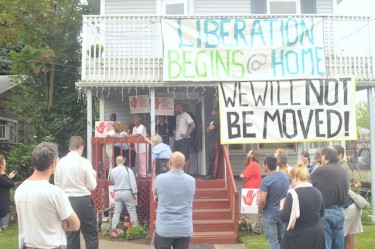 Lobo, co-founder of the Blazing Arrow Organization (BAO), an organization formed to fight gentrification* and police violence in North and Northeast Portland, talked about the relationship between violence and displacement from gentrification. “Housing must be defended to end violence in working class communities,” Lobo said. “Stable housing creates an environment for community self-reliance and healthy relationships. Without secure housing, families are displaced and communities are fragmented.”

The housing crisis has largely been the result of the greed of the 1%, particularly big banks that pushed people into loans they did not need – loans that, in many instances, came with higher interest rates than the owners could manage. Minority communities have been particularly hard hit, and Jackson spoke of the crassness of the bankers who were bailed out with our tax dollars, but offer no help to troubled homeowners.

After Annette Steele spoke about the defense of her home, Jackson, in the most touching moment of a beautiful afternoon, reminded people that while Steele did all she could to repay a loan virtually thrust upon her by an affiliate of predatory lender Citigroup, the bank went out of its way to ensure Steele received no relief. The Banksters,” said Jackson, putting a human face on an inhuman situation, “told Ms. Steele she’d be living in a box on the street. We gotta shut them down.”

As Northeast Portland has become increasingly gentrified, the Portland Police have ramped up arrests through its Gang Enforcement Program, taking in over 200 people – mostly black youth – each month along Killingsworth Street between North Interstate Avenue and Martin Luther King Boulevard. As police conflicts rise, BAO is beginning community patrols to monitor arrests and support people, and the new community center will serve as the base for those community patrols. 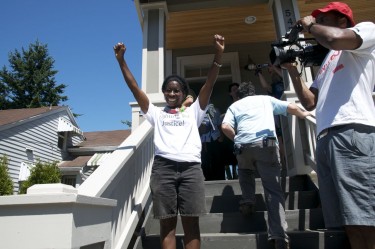 The activists outside Alicia Jackson’s modest house on Sunday also believe they are fighting crime. Though the dominant culture discourages it, many historic struggles were won by those who, despite the odds, persist in working toward a more just world. One of the keys, note organizers, is recognizing the opposition, and another is recognizing your allies.

“The enemy is not the gentrifiers,” said Lobo. “The enemies are corporations and the capitalist system. Gentrification is a collective problem. We need a collective solution. Working people deserve to live without the fear of losing their home or being brutalized by the police. The BAO will use this new organizing center to stop gentrification and respond to police violence. It will be open to anyone fighting for freedom from white supremacy and oppression. We are working class, queer, and people of color, committed to creating a society that both meets our basic needs and respects our human dignity. We are prepared to defend ourselves and the work we are doing, and invite others to work alongside us.”

Woody Guthrie once commented that you know you’ve lost your fight when they put you on a postage stamp. Likewise, it seems that latter day proclamations of the African American community representing the soul of Portland signals the fact that something is afoot, said Lobo, while detailing the history of Vanport on Sunday.

References to soul by the moneyed and powerful serve them in what the BAO calls their exploitative development of Northeast Portland. “If If this is the soul of Portland,” Lobo said, “then Portland is selling its soul. Gentrification breaks the tie between generations. Gentrification is violence against people of color and working class people. Gentrification is a crime.”

Update: Early Monday morning four police cars and five police officers showed up outside the new community center where one person was keeping watch. The police entered the center and arrested that person who is now being supported by We Are Oregon’s legal team.

The Portland Rapid Response Network sent out a text informing recipients of the raid, and very quickly about one hundred people showed up. “Our main priority is defending Alicia Jackson and Annette Steele’s houses,” Lobo said. “We can defend them if we in the community have their backs.” 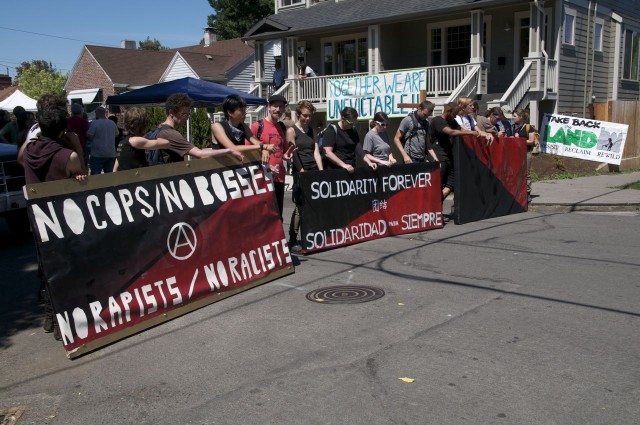 *During World War II, people seeking work at the Kaiser Shipyards found a home in Vanport, now the site of Delta Park and the Portland International Raceway. A large contingent of African Americans migrated there, increasing Portland’s African American population from 2000 statewide in 1940 to over 15,000 by 1946, mostly concentrated in what was known as Lower Albina, loosely bounded by today’s Interstate Avenue, Russell Street, Williams Street, and some of Broadway starting at the Rose Quarter and Memorial Coliseum. This area later became known as Jumptown.

On May 30, 1948 the Columbia River overflowed, and the subsequent flooding destroyed Vanport. Many African American families moved just south to neighborhoods in North and Northeast Portland – including Woodlawn, Jackson’s home. These neighborhoods became the center of the African American community in Portland. Jumptown was its cultural Mecca, a vibrant hive of African American culture, most obviously represented by a plethora of jazz clubs that hosted some of the most influential icons of the day. Billie Holiday, Duke Ellington, Ella Fitzgerald, Charlie Parker, and Louis Armstrong were among the luminaries who graced Portland.

The construction of I-5 and Memorial Coliseum sliced up Jumptown, and the area never recovered. But culture both embraces and transcends place, and the African American community continued to develop despite racist tactics like redlining. Today, gentrification and the new redlining of predatory lending and subprime mortgages threaten to tear the culture apart.