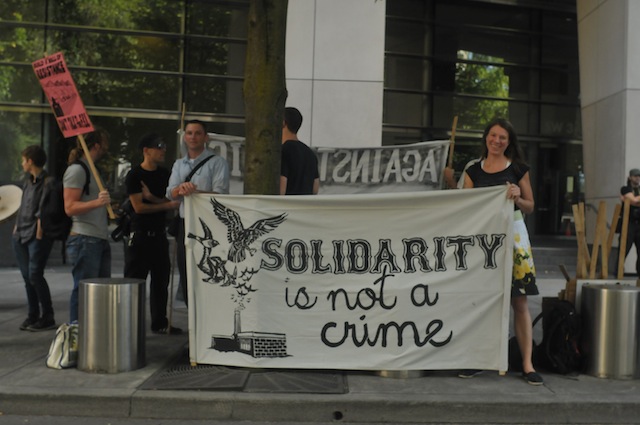 As 45 people rallied and educated passersby outside the Mark O. Hatfield United States Courthouse on SW 3rd Avenue last Thursday, Leah-Lynn Plante was readying to refuse to cooperate with the special grand jury in Seattle investigating the anarchist movement. The crowd had gathered to support Plante and other grand jury resisters, as well as demand an end to the repression of anarchists and the secret grand jury investigating the anarchist movement.

At 4:30 p.m. that day, Plante again informed the federal prosecutor and the grand jury that she would not answer any questions. US Attorney Jenny Durkan released Plante from the grand jury and she has been re-subpoenaed for an as yet undetermined date.

While any appearance in a courtroom is a matter of great gravity, it was exceptionally so for Plante. A federal judge was on hand and there was the very real possibility of Plante being found in civil contempt and sent to jail for refusing to cooperate with the federal prosecutor and the grand jury. In fact, Matt Duran of Olympia, who also refused to testify, was found to be in contempt of court. Duran’s contempt trial, overseen by Judge Richard Jones, was closed to the public, which, according to the Committee Against Political Repression (CAPR), was a move not seen since the McCarthy Era. Duran’s next detention hearing is scheduled for Wednesday, September 26.

In an open letter released earlier this week, Duran wrote, “I want to make it clear that I am in no way ever cooperating with the state now or ever. Anyone who knows me well enough to be a close friend knows that I will fight with my political allies and for them with every fiber of my being. If I ever did cooperate, it would bring an immeasurable amount of shame upon myself, my community, and my family as they have risked more in resistance than I have in my life so far.”

Prior to her grand jury appearance, Plante issued a statement explaining her refusal to testify. “This will be the second time I have appeared before the grand jury, and the second time I have refused to testify. The first time was on August 2nd. I appeared as ordered and identified myself. I was asked if I would be willing to answer any questions. I said, “No,” and was dismissed after being served a second subpoena. Over a month later, my answer is still the same. No, I will not answer their questions. I believe that these hearings are politically motivated. The government wants to use them to collect information that it can use in a campaign of repression. I refuse to have any part of it, I will never answer their questions, I will never speak.”

Other rallies supporting Plante, Williams, and other activists subpoenaed by this grand jury were held in Seattle, Washington and Minneapolis, Minnesota.

Rally attendee Jess Kincaid believes the FBI raids and the subpoenas are part of a longstanding tradition of FBI repression. “Since it was created, the FBI has stood against every progressive change our society has undergone. They have worked against labor rights, civil rights, and women’s rights. They harassed Martin Luther King, Jr. and Cesar Chavez, and covered up the murder of labor activist Karen Silkwood. They orchestrated the killings of organizers from the Black Panthers and the American Indian Movement. More recently they have targeted opponents of the wars in Iraq and Afghanistan. They have subpoenaed antiwar activists, including members of SEIU and the Teamsters, who refused to testify. The current raids and Grand Jury in the Northwest are part of a campaign to label some dissidents as terrorists in order to intimidate organizers and sew fear of social movements among the broader community.”

Dustin Hawks, said it was important to “show solidarity with other comrades targeted because of their political orientation. People resisting grand juries resist for all of us, and we have an obligation to stand with them because the next in line could be us.”

At a presentation last week about grand juries and how to resist them, four panelists emphasized the importance of subpoenaed activists and their activist groups and communities turning that resistance into greater strength and swinging it back on the state by further pursuing their work toward achieving a more just world. Duran echoed those sentiments in his letter. “They would not be doing this if we were not successful in any respect; if we kept to our ivory towers debating what is more revolutionary and not actively creating conflict, we would not be facing this repression. Do not stop the struggle, keep organizing and fighting or they will have won. When the Haymarket massacre took place all those years ago and the martyrs were hung for their desire for a better life, the State attempted to crush all radicals. Clearly, this did not work then and it won’t work now. If this was their desire, they have failed in every aspect of it as I have not seen anything other than flagrant disregard for them across the globe. Keep the struggle in your hearts and minds and do not bend to their will. They will never be able to destroy us no matter how hard they try.” 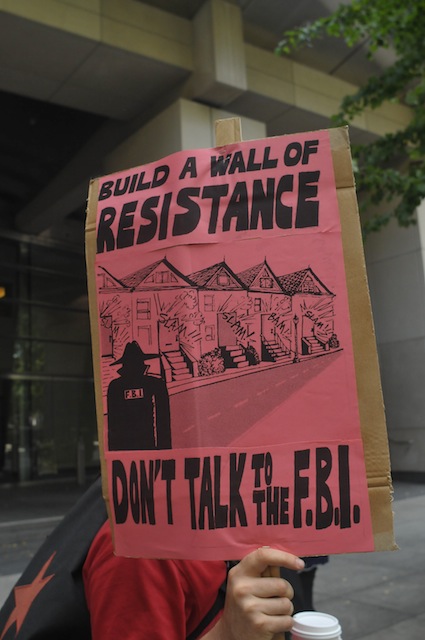 Those panelists also reminded the audience of the importance of solidarity, of standing strong with those whom you are engaged in struggle. Duran channelled those feelings: “I have long ago accepted that I am going to go to prison at some point in my lifetime. This compounded with the fact that I have such an amazing amount of support, to the degree that I don’t even know what to do with it, allows me to know that I am going to make it no matter what is thrown at me. People should know that this is more than likely not the end of this, the State will continue this Grand Jury well after my comrades and I are locked up. Whatever happens, I want you to know that you are not alone and are more than capable of handling whatever is thrown at you.”

In her statement, Plante, acknowledging she might be sent to jail, also thanked her fellow activists for their support. “I know that if I am taken away, I will not be alone. We have friends and comrades all around the world standing behind us, and even though this has been one of the most traumatizing experiences of my life, I have never felt so supported or loved. I can only speak for myself, but I have every faith that the others subpoenaed to these hearings will likewise refuse. And I know that hundreds of people have called the US Attorney demanding that they end this tribunal. Hundreds of organizations, representing thousands of people, signed onto a statement expressing solidarity with those of us under attack and demanding an end to this sort of repression. I know that those people will continue to support me, the others subpoenaed, and the targets of the investigation. That spirit of solidarity is exactly what the state fears. It is the source of our strength, yours and mine. And that strength shows itself in every act of resistance.”

According to rally speaker Tabatha Millican, the special grand jury could last until March 2014. Both Duran and Plante – should Plante be found in civil contempt -could be imprisoned until then for their refusal to testify.

Holding one end of a banner reading “Solidarity Is Not A Crime”, Levi Talbot summed up the mood of the rally attendees. “They’re putting their life and liberty on the line to not talk to the Feds. I would do the same, so I have the obligation to support them. You gotta stand behind them for doing that. That’s a revolutionary choice. That’s a beautiful choice.”