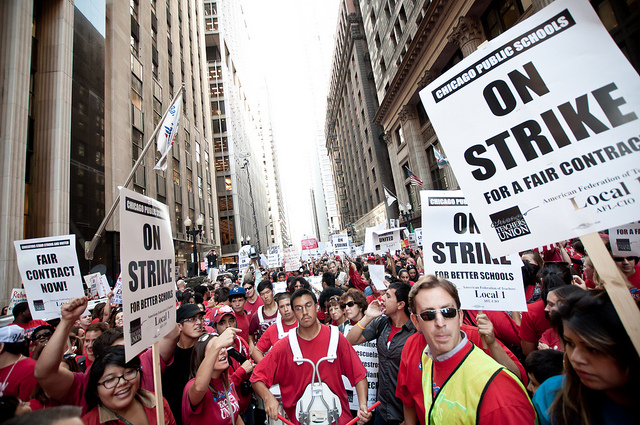 Many crucial issues are at stake in the Chicago Teachers Union strike. But the school district’s insistence that student test scores constitute a major basis of teacher evaluations seems to have become a particularly contentious point, leading to the vilification of teachers by the mainstream media, particularly The New York Times.

Joe Nocera of The New York Times, for example, wrote:

“On Sunday night, when she announced that the teachers were going on strike, Lewis said that teachers should not be at risk of losing their jobs over new evaluations that rely heavily on standardized test scores, which don’t account for outside factors like poverty and homelessness. Reformers have long complained that teachers’ unions too often use poverty as an excuse for poor performance. Lewis’s remarks would seem to justify that complaint” (“In Chicago, It’s a Mess, All Right,” September 10, 2012).

Is Joe Nocera right to imply that allusions to poverty as a major factor in determining students’ test scores is merely “an excuse?”  We can look to Joe Nocera himself for the answer. On April 25, 2011, he wrote:

“Going back to the famous Coleman report in the 1960s, social scientists have contended — and unquestionably proved — that students’ socioeconomic backgrounds vastly outweigh what goes on in the school as factors in determining how much they learn.”

We’ll give Nocera an ‘F’ for failing to uphold basic canons of consistency.

Nicholas Kristof, also of The New York Times, weighed into the debate with at least the intelligent admission that “… the main reason inner-city schools do poorly isn’t teachers’ unions, but poverty”.

He proceeded to offer a more sophisticated attack on teachers:

“There’s now solid evidence that there are huge differences in the effectiveness of teachers, even within high-poverty schools.”

“The study found that strong teachers in the fourth through eighth grades raised the game of their students in ways that would last for decades. Just having a strong teacher for one elementary year left pupils a bit less likely to become mothers as teenagers, a bit more likely to go to college and earning more money at age 28.”

Finally, he raised the crucial question:

“How does one figure out who is a weak teacher? Yes, that’s a challenge. But researchers are improving systems to measure ‘value added’ from beginning to end of the year, and, with three years of data, it’s usually possible to tell which teachers are failing.”

But this basically concedes the argument to the teachers. Kristoff acknowledges that such a reliable procedure does not yet exist when he states the current one only “usually” works. This could be as low as 51 percent of the time, which would mean it is no better than a toss of the dice. One must keep in mind that what is at stake is a teacher’s career and livelihood. Employing an evaluation system that is only “usually” accurate commits a grave injustice to anyone subjected to it.

“Though the final details are still uncertain, there will also be a serious teacher evaluation process. The various elements of those evaluations will change for each teacher year by year, but, as teachers progress in their careers, student performance will become more and more important. That’s vital because various studies have shown that evaluations that rely in part on test scores really do identify the best teachers”.

Brooks’ formulation goes a step beyond Kristof by suggesting that these evaluations “really do” identify the best teachers, although he might have been exaggerating their effectiveness. Nevertheless, his claim still leaves open the question: Are good teachers being correctly identified because of the student test-score component of their evaluation or because of all the other factors that are employed?

Perhaps more importantly, here is what The New York Times itself had to say about measuring the value added by teachers where test scores are a major component:

“Several studies have shown that teachers who receive high value-added scores — the term for the effect that teachers have on student test performance — in one year can score poorly a year later. ‘There are big swings from year to year,’ said Jesse Rothstein, associate professor of public policy and economics at the University of California, Berkeley.”

Teachers are not opposed to evaluations, although one would not know this by reading the op-ed page of The New York Times.  They rightfully oppose evaluations that do not provide an accurate reflection of their performance. Shockingly, none of the above writers is troubled by teacher evaluations with accuracy that fluctuates wildly. It would be interesting to discover if their convictions remained firm when faced with the prospect of being evaluated themselves by an equally unpredictable procedure for journalists.

Even The New York Times itself editorialized against the striking Chicago teachers, claiming “Teachers’ strikes, because they hurt children and their families, are never a good idea”. What The Times fails to understand is that teachers also oppose a strong emphasis on standardized test scores because they know first-hand that students are harmed in the process. As the picket sign of one striking Chicago teacher said: “I want to teach to the student, not the test.”

Here is how Diane Ravitch, who served as deputy secretary of education during the George H. W. Bush administration, described the problem:

“And so I concluded that value-added assessment should not be used at all. Never. It has a wide margin of error. It is unstable. A teacher who is highly effective one year may get a different rating the next year depending on which students are assigned to his or her class. Ratings may differ if the tests differ. To the extent it is used, it will narrow the curriculum and promote teaching to tests. Teachers will be mislabeled and stigmatized. Many factors that influence student scores will not be counted at all”.

When standardized test scores are emphasized, teachers are compelled to teach to the test or risk losing their jobs. Not only do the tests narrow the curriculum, as Diane Ravitch correctly observes, they undermine the entire teaching endeavor. Great teachers love their students and love to instill in them a love of learning. And the students in return love their teacher and become open to horizons of knowledge that were unimaginable to them before. This is the foundation that nurtures wonderful, sometimes, magical learning experiences in the classroom. No standardized test can possibly penetrate or measure this domain, and the attempt to apply such a ruler only reveals the ignorance of those who pretend to know better.

Ann Robertson is a Lecturer at San Francisco State University and a member of the California Faculty Association. Bill Leumer is a member of the International Brotherhood of Teamsters, Local 853 (ret.). Both are writers for Workers Action and may be reached [email protected]