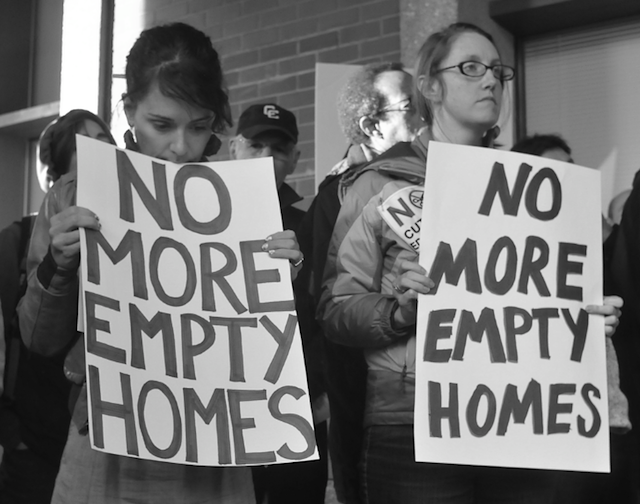 Just after her husband had driven away to take their granddaughter to school on November 6, Heather Sirotak found herself confronted by 40 officers, some brandishing guns. Prior to entering the house with the aid of what she described as a battering ram, Sirotak said she heard one  “bellowing” that he was from the Multnomah County Sheriff’s Office and demanded she open the door. When Sirotak tried to reach her husband Will, an officer took her phone away. Later, Will was prevented from returning to the house, as all streets leading to it had been shut down.

This is becoming the new face of evictions. On October 30, three deputies from the Multnomah County Sheriff’s Office showed up at the home of Patricia Williams and Darren Johnson to enforce an eviction notice. There was a standoff, and the deputies decided they needed backup, calling in over 30 Portland Police officers.  When members of the community came to support Williams and Johnson, police in riot gear were called in. Police used pepper spray on the protesters, and one person was arrested.

Heather Sirotak is 58 years old and has cancer. Sirotak says she and her husband were not planning on fighting the eviction. They just needed more time for packing. “It’s not easy to move out of a home,” said Sirotak. “But we were doing it.”

Prior to the police raid, she and Will had talked with Will Tucker of Willamette Valley Redevelopment, who now legally owns the property. Sirotak said Tucker told her they could have two weeks after Halloween to leave. When the police barged in, Sirotak was in her pajamas, surrounded by many boxes of family possessions that already had been packed.

Patricia Williams and Darren Johnson had lived in their house for 8 years. A few years ago Williams was forced to retire from her job because of a pulmonary ailment. She tried to get a loan modification, but when she went to the bank and asked for help, Williams said “it was like ringing the dinner bell for the sharks.” She filled out the necessary paperwork, and a year later the bank called to tell her they had lost the papers, so Williams had to start over. Meanwhile, the bank foreclosed on the house.

On November 9, Williams, Johnson, the Sirotaks, and 60 community members fighting to keep people in their homes, gathered at the Multnomah County Building to demand that Sheriff Daniel Staton stop sending police to service big banks on the taxpayers’ dime. However, Staton had closed the office early, and in an ironic turn of events, riot police were apparently up on the third floor, making sure no harm came to the official home of the sheriff.

Heather Sirotak described her eviction experience to the crowd as one of many ordeals that have left her feeling vulnerable. “I’ve been beaten down by all this,” she said, “and they have to point a gun at me.” Sirotak was amazed that so many resources would be used “just so Chase Bank could profit off of cruelty.” 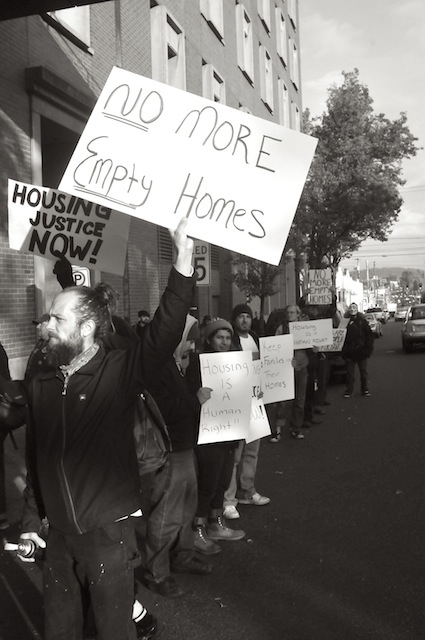 We Are Oregon, one of the many groups fighting evictions, had intended to deliver a letter to Sheriff Staton telling him the community will not stand for the increased use of “police aggression against families struggling to stay in their homes and stand up to the banks.” The letter demanded Staton “stop spending public money enforcing big banks’ access to our communities’ wealth” and work with the community as it seeks to “put a stop to all foreclosure evictions until banks are held accountable and they are no longer profiting off a rigged game.”

The group also sent letters to the Portland mayor and city commissioners, reminding them that when the Portland Police assist in evictions, it is Portland citizen tax dollars being used to subsidize banks at the expense of the community.

The movement to fight foreclosure evictions and keep people in theirs home is spreading, and considering the response by the police, it seems both they and the banks for which they seem to be moonlighting see a threat in its growth. But should anything less be expected? The banks were given billions of taxpayer dollars in bailouts after terrorizing the ever diminishing portion of the economy that still works for the working class. Meanwhile, homeowners such as Williams, Johnson, the Sirotaks and over 76,000 other Multnomah County residents have been offered no help since the economic crisis began in 2008. In many cases homeowners are pushed toward foreclosure by those very banks which are now making handsome profits by lending money to home poachers who buy the foreclosed houses.

As Williams, Johnson, the Sirotaks, and members of We Are Oregon brought their letter to Sheriff Staton’s abandoned third floor office, Debbie Austin, who has spent over a year fighting foreclosure on the house she has owned for 26 years, spoke in the lobby of the Multnomah County Building. Austin honed in on what the fight against foreclosure is about: people living in houses or living on the street. The banks have chosen the latter.  Sheriff Staton has chosen to work for the banks and against the people of Multnomah County, and it appears the mayor and the Portland City Commissioners have as well.

Want to take a stand against Sheriff Staton and the City of Portland publicly subsidizing the banks by using police to enforce foreclosures? Go to: http://action.weareoregon.org/page/speakout . And then find out how you can get further involved at: http://weareoregon.org.