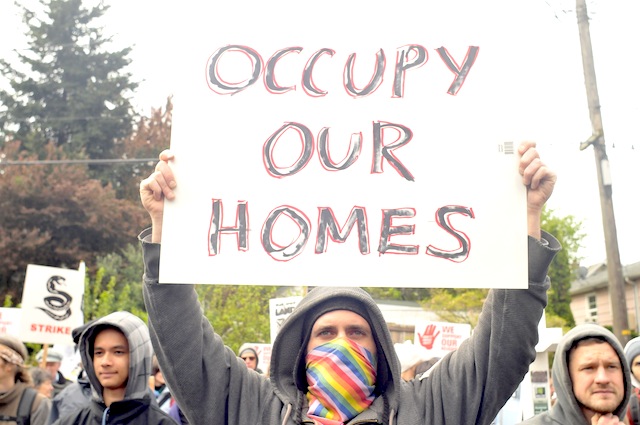 November 20 — “As you can see, I’m packed up and ready to go.” Debbie Austin doesn’t quite have the sarcasm thing down, at least by my Northeast pedigree, but nonetheless her sardonic tone is underscored by a quick look around the house which bears the hallmark of a typical domestic scene. There’s hot coffee is in the kitchen, a chihuahua and his friend are moseying around the room, and there’s an invitation to sit on the couch as Austin settles into a massaging recliner. About the only note that something is out of the ordinary is that every few minutes someone comes in, grabs some coffee, uses the bathroom, or sits next to me to tap away on his computer, and then leaves again, always saying hello to Debbie, often asking if she needs anything.

Those seemingly random visitors are actually just a small handful of the many people who have become involved in the eviction resistance movement. They are here today, having arrived at 6:30 AM because Austin recently received an eviction notice that she must vacate her home by November 20th. Should Sheriff Staton attempt to evict Austin, over 1000 members of the Rapid Response Network can be turned out to help her defend her home.

How Austin got to this point is hardly unique. In many ways it reads like what is starting to feel like a classic early 21st century US story, a Horatio Alger tale gone sideways, where those who play by the rules and enjoy the fruits of their success suddenly have their world turned upside down. The Horatio Alger stuff always was nonsense – save for a select few who had clawed their way up and were used to prove that everyone else was only momentarily stuck at the pre-millionaire level and would be rewarded by the system if they just worked really hard. Reality, however, is spinning a different tale.

Up to 2008 things were going well for Austin. She and her husband Ron, who worked two jobs, had saved up enough money for an RV. Then the economy went in the tank, Ron lost one of his jobs and was forced to take a pay cut at the other one. He soon got his second job back, but as Austin says, the financial damage had already begun.

In 2009 Ron was diagnosed with cancer. Debbie had a second surgery on her back that ended up crippling one of her feet. Later that year she too was diagnosed with cancer. Even though he was receiving chemotherapy, Ron continued to clock 40 hours a week, but was unable to get the overtime needed to keep them afloat. Later that year they filed for bankruptcy, and the RV was repossessed.

Eventually, the Austins filed for a loan modification with Homestreet Bank. For three months they were scheduled to pay about $1480 instead of the usual $1760, which really made a difference. Austin thought she had been making her payments, but she saw the November coupon in her payment book, and worried she had missed that one. December was a tough month, but by mid-January she had paid off November and December. Then she received a notice through her bankruptcy lawyer declaring that she was three months in arrears. When she called the bank seeking answers, nobody would talk to her, because it was a matter between her and her lawyer. When she called her lawyer, he too said it was out of his hands.

Back and forth it went. In February 2011, HomeStreet wrote a letter to Austin, through her attorney, notifying her that that if she did not deliver six months’ worth of mortgage payments, it would foreclose. The letter said that to avoid foreclosure, she needed to contact the bank by the 22nd. Unfortunately, her lawyer sat on the letter until the 24th.

Finally Debbie called the bank and asked someone to pretend as if they didn’t know her and give the best advice they could to someone in her circumstances. The most important information she received was that if HomeStreet foreclosed on the Austin house, then Debbie might be able to arrange a payment plan with it. She figured this was her ace in the hole: “The bank would work with me, and we could keep the house.”

One thing kept eating at Debbie. She received a second letter from the bank in February that contained a copy of check she had sent which they had previously denied receiving. It had, in fact, gone through the system. “They ignored it,” Austin said.

After Homestreet foreclosed, Debbie figured she now could talk directly to the bank and work out a way to keep her house and pay off the mortgage, a little here, a little there. But the bank told her she had to bring her payments up to date. Now. It would not accept partial payment. She tried negotiating, but the bank would not budge. That ace in the hole didn’t work out, and Austin didn’t know what to do, since she lacked the $20,000 HomeStreet wanted immediately.

Debbie received a flier from We Are Oregon about a foreclosure crisis meeting. When she arrived at the meeting, she realized that she had no idea of the magnitude of the foreclosure problem in America. “I just thought it was us.” We Are Oregon began working with Debbie, and at a December 6, 2011, press conference  she became the first person in Portland to publicly state she would resist foreclosure.

Austin then brought suit against HomeStreet Bank for an illegal foreclosure. She found that she had made the November payment, discovering the receipt after Ron told her she had in fact sent in a check. “I wasn’t even two months behind. It was only one month. I’d been going through all this worry, hassle, threats, and intimidation with no help from my attorney and no help from the banks.”

But when Debbie went before a judge seeking a summary judgment so she could take her case to trial, she was denied. Despite having the receipt showing her November payment, Austin said the judge would not listen, telling her she needed a lawyer. When Debbie told the judge how tight her funds were, the judge rattled off a list of various groups and agencies that could help.

Austin called and called, but just as with her bankruptcy lawyer and her bank, she found no help. Eventually she stumbled across a paralegal who figured out the problem. HomeStreet had received her November check and cashed it, but had applied the money to her regular house payment instea of her loan modification. It was an easy enough mistake to make, as both had the same account number. But the bank’s carelessness had snowballed to the point where Debbie Austin found herself before a judge who possessed the legal authority to determine whether or not she would have a house or be out on the street. 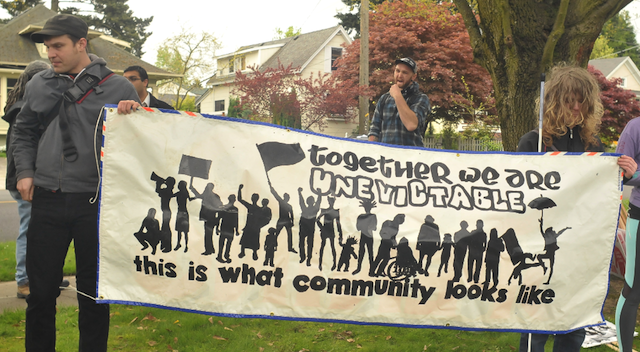 When Austin returned to court two weeks later the judge still would not accept her paperwork because, though it was properly filled out,  the paralegal was not a lawyer. The judge also claimed he had not received additional paperwork Debbie had hand delivered to his office.

In seeking summary judgment to move the case to a trial hearing, Austin was saying the bank had committed fraud because it cashed and issued a receipt for the November check, but had not credited the money to the proper account. “The foreclosure was legal,” said Austin, “but not how they got to it.” By the rules of a summary judgment, said Austin, this fact alone should have been enough for the judge to send the case to trial, but the judge disagreed, ruling that the bank could foreclose on Austin’s house on November 5th. Austin suggested she had different plans. “I told him, ‘I’m not moving. I’m staying. That’s my home.’”

“I cannot believe this is happening in America,” says Debbie, “when I can show actual proof and be told it’s no good. This is not the America I was taught in school where the truth will always win over. These banks are taking our homes and the justice system is just allowing them to do that.”

Austin commented on the injustice of banks taking the public taxes that bailed them out without using that money to help people falling behind on their mortgage payments. “They’re the ones stealing this house from me behind the skirt of the law. These banks have put us into all this debt. The government bailed them out with our taxpayer money. Our tax dollars bailed them out, and then they foreclosed on us. Taxpayers are foreclosing on themselves.”

Which brings us to this morning and eight supporters under a small gazebo on Austin’s driveway, drinking coffee and eating breakfast on this bastard day of cold, hard rain. In its small way, it is community at its finest: people sharing with and supporting each other. A similar scene is happening at the homes of Alicia Jackson, Annette Steele, Patricia Williams and Darren Johnson, and Will and Heather Sertak. It is a vision of this country that values people over profit, that stares down bank-written laws that have created a society where a small group of people with far too much wealth and power can put a value on someone’s life and then cash that life in a manner no different than a sociopath on a shooting rampage. One is called business as usual, and the other is called cold-blooded murder. It is a distinction without a difference. 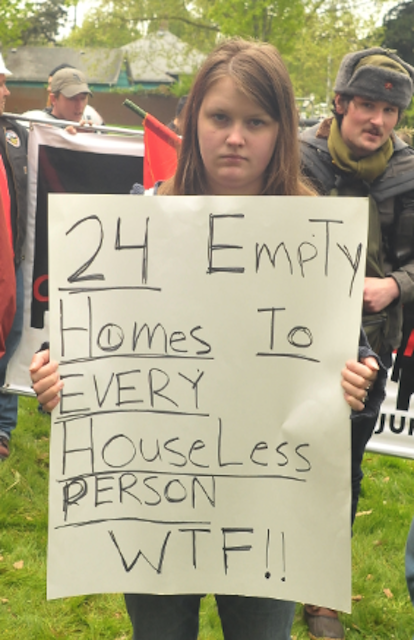 For one reason or another as I step out of Debbie Austin’s house I find myself in 1977 or 8. Maybe it is the angle and hue of the light that reminds me of when I was a kid, how my dad would take my brother and I to mass on Thanksgiving morning, and afterward we would take a trip down to a nearby apple orchard and grab a jug of cider and a housemade donut. On the way home we’d stop at Holiday Park and look out over the lake, feed the ducks and geese, and imagine a time a few months ahead when the trees would again have leaves. Once home, my brother and I might toss around a football while our mom cooked, but we were just busting time before my grandma and grandpa, in that boat of a Plymouth, came ambling up the block, mooring lines and all.  It was a pleasant time, and it is a pleasant memory. I am thankful for both.

And I figure that prior to all this personal economic crisis, cancer, foreclosure, and all manner of fresh hell from bankers, lawyers, judges, and other representatives of The System, Debbie Austin too had a cornucopia of pleasant experiences that have become memories for which she is thankful. It is hard to imagine one having the same home for 26 years and not. But what about this Thanksgiving, now just two days away?

So I ask. Debbie looks at me strangely, perhaps wondering if I’ve noticed the people who since early this morning have been on the driveway and meandering in and out of her home, a few of the many who have spent months as a testament to the power of choosing a path of compassion, caring, generosity, sacrifice, and above all, love, over a system that represents the inversion of those values offers.