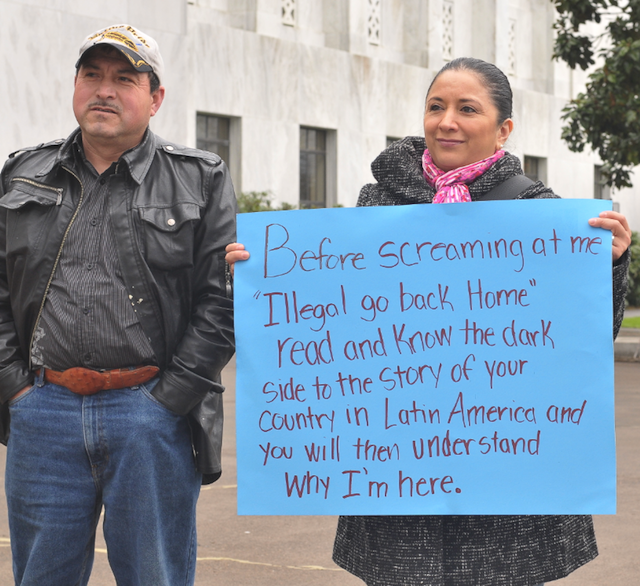 The Oregon DMV currently allows driver’s licenses to be issued only to documented US citizens and immigrants with work permits under Deferred Action for Childhood Arrivals (DACA) a 2012 executive order issued by President Obama. Various immigrant rights groups and other groups supportive of immigrants’ rights have been pushing the Oregon legislature to craft a bill that would make all people eligible to earn a driver’s license if they pass the required tests.On the afternoon of March 26th, 70 people gathered on the steps of the state capitol in Salem to demand that all people without documentation be allowed the right to drive.

“We don’t have to be discriminated because we are undocumented people,” said Oregon Dream Activist Ricardo Valera who helped emcee the event. “We are workers. We are parents. We are students. So we have to have the same driver’s license.”

Throughout the 90 minute rally,  immigrants without documentation spoke about how driving is an integral part of their lives. Whether to go to work, stores, church, or to bring their children to school and the doctor, it was clear that – as is the case for many US citizens – not driving is often not an option. The difference of driving without a license between those two groups, however, is stark. If an Oregonian who is a US citizen, or perhaps more accurately, who appears to be a US citizen, is caught driving without a license, she will be fined.

But a person who is not a US citizen or appears not to be a US citizen – which in today’s charged climate effectively means a person with brown skin – may end up being detained by Immigration and Customs Enforcement (ICE). Likewise, a license that reveals a driver’s immigration status puts her at risk of being racially profiled and arrested by police and later handed over to ICE. During the Obama Administration, over 1 million people have been deported. About 80% of them were detained by ICE because of misdemeanors such as driving without a license. The effect has been to tear apart families, as well as make immigrants without documentation wary of reporting crime.

Kassandra, who was born in the US, described how scared she gets because her father, the only breadwinner in her family that also includes her four siblings, drives without a license. She knows that if he is pulled over, she may never see him again.

Gregoria, an immigrant without documentation from Mexico, came to “the land of opportunity” to get a good education for her four children. “Every day we risk being detained, deported, and jailed,” she said. “Not having a driver’s license affects me very much. I’m very stressed. Every day I wonder if I’ll be able to come back to my house. Am I going to lose my house because I am going to be detained because don’t have a license?”

Many immigrants, particularly those from Central and South America, are compelled to come to the United States because of so-called free trade agreements such as NAFTA that reap profits for corporations by depressing wages, ignoring environmental impacts, and flooding markets with heavily subsidized farm produce, such as corn. Theoretically, FTAs hold a country’s labor force hostage, demanding that workers either accept low wages and minimal, if any, benefits, or be unemployed. No rational person is going to watch her family starve. Immigration is simply a rational, if not necessarily desirable, economic decision, but unlike capital, which is allowed to flow freely across national borders covered by FTAs, labor is expected to respect those lines.

“That line in the dirt that is between this country and our neighbors to the south is not made by God,” stated Mira Conklin of the Interfaith Movement for Immigrant Justice (IMIrJ). “That’s a line that’s made by humans and it’s a line that tries to tell us that a person born on one side of that line has more value than a person born on the other side of that line. And we know that is not true. We know that we all have value as members of the human family, of God’s family.”

Co-emcee Marco Mejia of Jobs with Justice emphasized the importance of bringing to Oregon’s politicians the reality that people are often forced to immigrate to the US because of forces beyond their control. “We are here not because it just occur to us to migrate to the USA for fun,” he said. “We are here as a consequence of the foreign policies and the free trade agreements implemented by the united states. Legislators here in Salem and in Washington, DC need to understand those root causes of migration before they develop any policies. They need to understand that people are running away from poverty, political violence, persecution, environmental destruction, and that all these are caused by the exploitation of our cheap labor and natural resources. We are victims of this system and we deserve to be treated with dignity and respect.”

Some speakers pointed out that it was unfair that the state was not willing to issue them a driver’s license, but was willing to take their taxes. Samuel, who came to the US in 1994 and brought his family here ten years ago said, “I pay my taxes like anyone else. The government doesn’t discriminate my taxes. In the same way, I ask them not to discriminate my rights.”  Valera stated, “We are humans. We are taxpayers. We contribute to this economy.” In 2010, in Oregon, families headed by immigrants without documentation paid a little over $99 million dollars in personal income, property, and sales taxes.

According to the Urban Institute, contrary to the myths often told by anti-immigrant groups, when refugees are excluded, “immigrants of working age are considerably less likely than natives of working age to receive welfare.” In fact, immigrants without documentation are ineligible for little public assistance save for “emergency medical care under Medicaid and Women, Infants, and Children (WIC) nutrition program benefits” and according to many studies they contribute more money in taxes than they cost in social services.

Sindy Avila, an Oregon Dream Activist whose family came to the US to escape poverty when she was two years old, tied together many of the threads running through the rally. “If it weren’t for free trade agreements and all of these economic things that cause displacement, my family wouldn’t be here. A lot of families wouldn’t be forced to migrate here. And so today we stand together in solidarity as parents and as valuable members of the community to let our politicians know that we need drivers’ licenses. This is a necessity that we need to go to work and to provide food for our families and to contribute to our communities as valuable people of our communities. We’re here to say that we’re undocumented and we’re unafraid and we’re not gonna stop fighting until we achieve having dignity and justice for our undocumented communities because it goes beyond just a legal title. It goes toward taking care of our communities.”