Gathered around pairs of shoes representing fathers and father figures who have been detained and deported, over 70 people assembled in front of the Immigration and Customs Enforcement (ICE) Office at 511 NW Broadway on Monday June 17th to demand Congress and President Obama create and pass immigration legislation that keeps families and communities together. The action was one of over 25 that occurred throughout the United States this Father’s Day weekend.

On the steps of the ICE Office, Victor Salinas of the Latino Network told people about growing up in Newberg, Oregon. Salinas’ parents immigrated to the United States from Mexico in the 1980s, giving birth to him in this country, making him a citizen of the United States. At age 13, his returned to Mexico to “avoid the judicial proceedings that, at the time they believed, would result in deportation, leaving him “at a crucial time of my adolescence to fend for myself.” A friend of the family took Salinas into custody, but the loss of his family left him confronting depression as well as “cultural and identity issues that weighed heavily as a young man.” Father’s Day, he said, was “a cruel reminder that our families have been torn apart because of a broken immigration system.”

Salinas added, “Millions of other young people are growing up without their parents due to detentions and deportations. We need to address this as a family issue, not a legal or political one.”

Rosie Gomez, a mother of three, spoke about her fiance, Rigoberto, who on April 15th, the same day he proposed to her, was arrested, and was recently deported. Rigoberto, she said, was born in Guatemala, but left to escape poverty and violence. He returned not so long ago because his brother needed his help, but during the time he was there, he missed his asylum hearing. “It breaks my heart,” Gomez told the crowd, “that I may never see him again. What do I tell our children?”

Gomez’ and Salinas’ stories are hardly unique. Despite claims of supporting immigrant communities, the Obama Administration has overseen deportations of people without documentation in even far greater excess than during the prior two Bush Administrations. These deportations have largely targeted people from Mexico, Central America, and South America.

Reverend Kate Lore, Minister of Social Justice of the First Unitarian Church, noted that while for some people Father’s Day may have been a “perfect day,” for many “it was a cruel reminder of families being torn apart.” Lore stated, “Families that love each other are struggling, and because of this must stay together. We are asking members of Congress and President Obama that any legislation must have as its cornerstone family unity.”

Legislation passed through the senate on June 27th allowed a “path to citizenship” for some immigrants without documentation, but also heavily militarized the border between Mexico and the United States, calling for $46 million to be spent to increase the number of border agents to 40,000, increase the use of drones, and to build about 700 miles of fencing along the border.  Any legislation coming from the the Republican controlled House of Representatives will likely focus more on criminalization and punishment of people without documentation.  While most Democrats support a path to citizenship, many of those paths regard immigrants as parts of an economic engine–with some proposals even sounding like indentures–rather than as people who are members of families and communities. With many opponents to immigration reform stating that the path to citizenship is akin to amnesty, and thereby objectionable, it appears that if any immigration reform is passed this year, it will hardly solve any problems facing people without documentation, and may even exacerbate them.

Marco Mejia of Jobs with Justice and the Activists Coming Together for Safety and Justice Network (ACT) emphasized that the current immigration system is in fact not broken, but rather functions perfectly within the global economy. So-called free trade agreements such as NAFTA and CAFTA keep other countries in poverty while allowing the United States and other economic powers to exploit their natural resources and labor. Desiring to improve their families’ lives–often because of economic necessity as well as fearing the brutal regimes that first world countries often support–people migrate to countries like the United States where they find themselves exploited again, discriminated against, and in many cases, deported back.

“It really works for what it is intended to do,” said Mejia. “It provides with a great source of cheap and vulnerable labor for so many industries. It provides with workers that are so afraid to report their exploitation because the bosses will threaten to hand them over to ICE and the police. It provides with a group and community of people to be blamed for the consequences of the unjust economic system and promotes fear at the same time that they take advantage of their political and electoral agendas.” 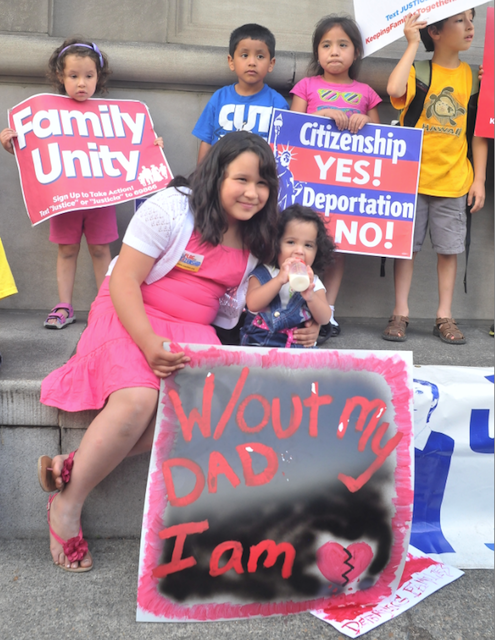