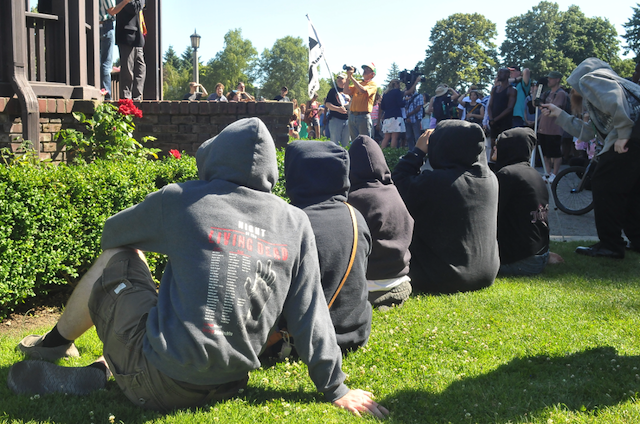 A crowd of over 400 people gathered in Peninsula Park on Sunday July 14th in response to the verdict that acquitted George Zimmerman of second degree murder and manslaughter charges. Zimmerman was on trial for killing 17 year old Trayvon Martin on February 26, 2012 in Sanford, Florida. At the heart of the trial was Florida’s “Stand Your Ground” law, an American Legislative Exchange Council (ALEC) sponsored piece of legislation that has for years been promoted around the country by the National Rifle Association

In the end, the jury found Zimmerman was justified in killing Martin as he was engaged in an act of self-defense. Section 3 of the Stand Your Ground law reads:

A person who is not engaged in an unlawful activity and who is attacked in any other place where he or she has a right to be has no duty to retreat and has the right to stand his or her ground and meet force with force, including deadly force if he or she reasonably believes it is necessary to do so to prevent death or great bodily harm to himself or herself or another or to prevent the commission of a forcible felony.

The language of the law made finding Zimmerman guilty difficult as, in a twist that Lewis Carroll would have appreciated, it was up to the prosecution to prove without a doubt that Martin–who  apparently forfeited his right to self-defense when Zimmerman began hunting him–did nothing Zimmerman could construe as life threatening.

When Barack Obama was elected president in 2008, many people spoke of a post-racial United States. The Zimmerman trial seems to have called this judgment into question. But that judgment was only rendered by those who don’t experience the day to day humiliations, anxieties, worries, fears, and all other shackles upon their freedom (of which this author is one). For People of Color in this country, the Zimmerman trial was not proof that racism is alive and well. They know that every day, and the justification of Trayvon Martin’s murder was but one more example.

The mood in Peninsula Park was, at first, somber and reflective. In a city where police kill people with extraordinary impunity, it was another shot to the heart, just from a greater distance. Now a self-proclaimed policeman–a vigilante–was not being held accountable because he, like the police in so many instances, said he killed a person because he felt his life was in danger.

While the corporate media has almost exclusively been fixated on Zimmerman, it has scrupulously avoided larger issues such as why so many people like Zimmerman exist in this country, why the Stand Your Ground law exists, and why People of Color, particularly Black people, are routinely victims of extra-judicial gun violence. Regardless, those questions exist, and for over an hour numerous people spoke from the gazebo in the center of the park. Through anger, sadness, apprehension and so many other emotions they poured forth their feelings and thoughts.

One young woman who rode her bike from Gresham to attend the rally understood that George Zimmerman is a part of a greater problem. She said she was not surprised by the result, but cared much more about why Florida had such a law that would make Zimmerman’s acquittal so easy. She also sardonically mused about if this was another example of a post-racial United States.

A man said more militant action was necessary, saying the city did not care if people rallied in Peninsula Park. He instead suggested marching downtown and tying up traffic and commerce. 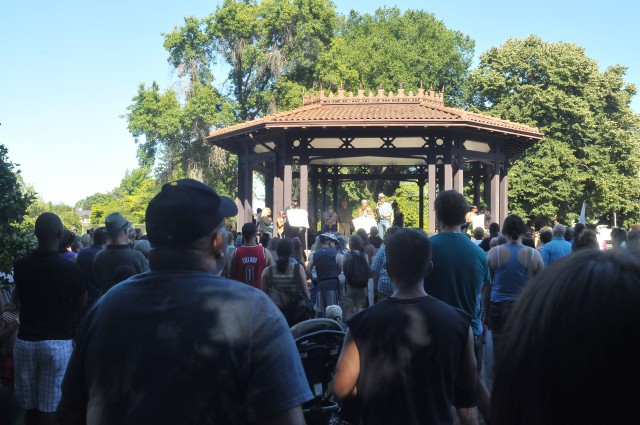 A young woman, no more than ten, said people were out today for the same reasons that brought out Martin Luther King.

Her mother noted that Zimmerman was a murderer–a person who didn’t have any “loyalty to life” and “no loyalty to anything but a bullet.”

A minister from Vancouver stated that Martin would never have been profiled, followed, and killed if he was white. He then wondered about what people should tell their children, in the end settling on that children should be told they are part of one community, and that while their elders did not get it right, they at least stood together and tried to make the world better.

On and on they came, speaker after speaker, urging community and urging that community to take action.

Another woman urged people in the crowd to tell the people around them, “Your life matters to me.” As she finished she said, “Let us proclaim this truth: we are all human beings.”

Other people noted that People of Color are either spending their lives in jail or being terrorized outside of it, referencing the immensely disproportionate number of People of Color in prison, as well as the way police are used to control those who are not in jail. Noting that Martin’s death was hardly unique, one speaker said, “There’s literally a field of corpses. A field of bloody corpses.”

Another speaker spoke of how every 28 hours a Black person is extra-judicially killed. Yet another told the crowd this statistic was clear proof that just raising your voice was not enough, that people needed to get organized. “We can’t just be here to raise our voices,” he said. “We need to build power.”

In March of 2012, as the news of Martin’s killing reached out across the nation, people gathered in this same spot of Peninsula Park, demanding justice, many of them optimistic. Had George Zimmerman been convicted, that surely would have been some measure of justice, particularly for Trayvon Martin’s family and friends. But for the Kendra Jameses and Keaton Otises, and for the non-Portland People of Color who are cut down every 28th hour, only a point of justice.

As it turned out, Zimmerman’s trial was another example of American injustice. Justice is rarely blind, and when it comes to threats to white supremacy, it is eagle-eyed. And in its defense of white supremacy, what does another dead Person of Color matter? 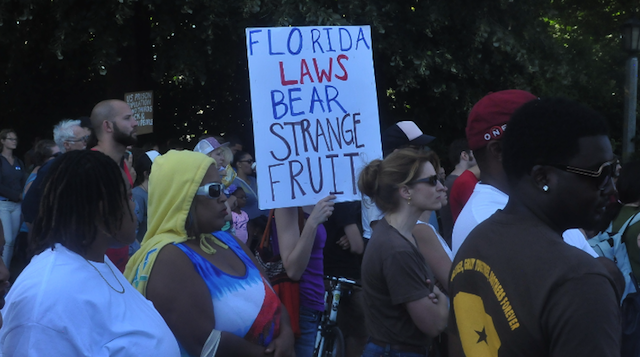