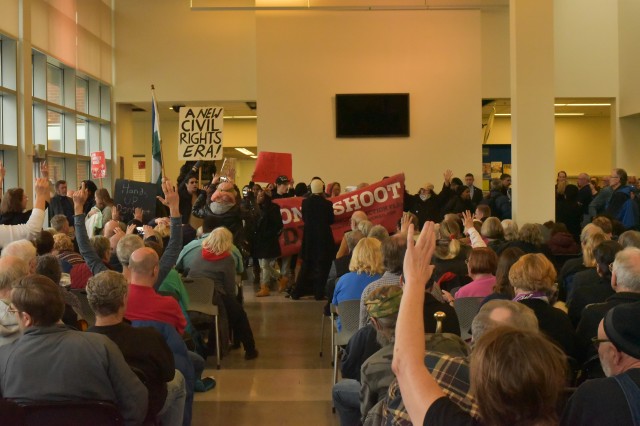 Very early in Senator Ron Wyden’s town hall meeting on January 3 he proudly announced that he had held over 700 of these meetings since becoming a senator. As events turned out in this surprising evening, It may have been the first one where he actually had no choice but to yield to his non-corporate constituents.

Prior to the start of the meeting at Portland Community College’s Southeast campus there was an approximately 120-strong rally in opposition to the Trans-Pacific Partnership (TPP)–the so-called free trade agreement that has been described as NAFTA on steroids. The hard work of these activists in tandem with their allies in the 11 other Pacific Rim countries whose governments are helping negotiate the TPP, has so far kept it from being signed.

The TPP, like all other “free trade” agreements (FTAs) before it, has very little to do with trade as most people understand the term. This agreement would lock 12 countries into various arrangements that promote the privatization of the public sector and the erosion of democracy. Rather than loosening restrictions on trade, the TPP would expand corporations’ rights to destroy economies, the lives of working people, and the places those people call home.

Lori Wallach of Public Citizen has estimated that NAFTA alone has resulted in a net loss of 1 million US jobs as well as a decrease in wages and an increase in inequality. According to Elizabeth Swager of the Oregon Fair Trade Campaign (ORFTC), Oregon has lost more jobs per capita than any other state in the country due to FTAs. Swager also noted how the TPP would only augment the devastation.

“You’re here,” she told the crowd, “because you know that the climate crisis, the biggest threat to our planet, will increase if the TPP moves forward. You know that healthcare costs are already out of control, and big Pharma is pushing for the TPP to make it hard to access affordable generic medication. You know that the TPP is an attack on people, the planet, and democracy itself.”

The linchpin to TPP passage in the US is the “Fast Track,” whereby Congress would hand over its authority over trade negotiations to President Obama. “Fast Track” was soundly defeated a year ago and even Wyden–who has never met an FTA he didn’t love–publicly opposed it after enormous public pressure was brought down on him. 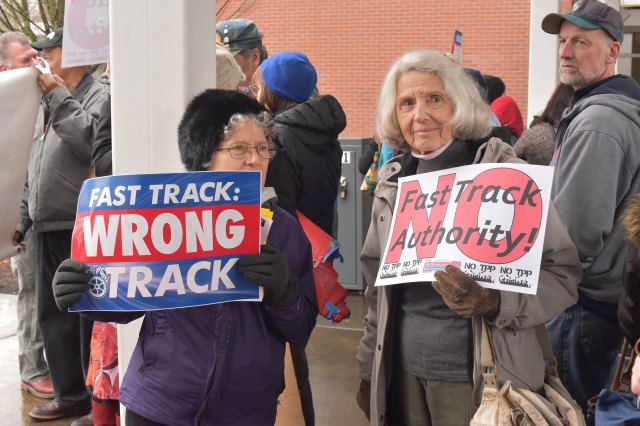 Instead, Wyden said he would introduce “Smart Track” legislation, something that never materialized because it was obvious that was the same as “Fast Track” and would mean Congress ceding its constitutionally mandated responsibility to govern rules on trade, including making the TPP subject only to an up or down vote with no amendments allowed, and very little time for public discussion and debate.

At the rally Swager noted that Wyden, now the ex-chair of the Senate Finance Committee after November’s Democrat bloodbath, feels emboldened to get behind new committee chair Utah Senator Orrin Hatch’s attempt to reintroduce Fast Track legislation when Congress reconvenes this month. “As the ranking Democrat on the Senate Finance Committee,” said Swager, “Senator Wyden’s support for it now could give cover to some corporate-minded Democrats that the bill is suddenly safe to get behind.”

Following the rally, many entered the meeting hall, although some were turned away because capacity had been reached.

Then things really got interesting.

About a half mile down 82nd Avenue, a large group of people with Don’t Shoot PDX and 15 Now PDX held a rally at a McDonald’s. The protesters then proceeded to march down one lane of 82nd and onto the PCC campus. When told the hall was already full and they would not be able to enter, a few people just opened the doors and the group entered the hall and began chanting, “Hands Up! Don’t Shoot!” It was an injection of direct democracy that very rarely appears at the staid dog and pony shows that masquerade as town hall meetings.

An interesting part of this movement against police brutality has been seeing the white liberal reaction to it, with many decrying the use of anything other than peaceful to the point of obsequious protests. It’s okay to protest Black people being gunned down every 28 hours by police and vigilante forces, but please, do not disrupt anything, particularly holiday shopping.

While a few people in the crowd raised their hands along with the chant, quite a few others voiced displeasure, saying they were there to discuss “important issues” and that their “time was precious.” One man told protesters that he and others were at the meeting trying to protect the Constitution. The man protester replied, “I’m 23 years old, and I don’t give a fuck about your Constitution,” a comment that was understandable in the context that slavery was a pillar of the founding of this country and is directly linked to the racism at the heart of police violence that results in so many Black people being shot and killed.

Those who bear the brunt of this violence may not see the merit of protecting a constitution that so seldom protects them. As Naomi Klein has written, “The courageous demonstrators shouting ‘I can’t breathe!’ and ‘Hands up, don’t shoot!’ are asserting a core principle about the value of every human being, starting with the most discounted.” About 240 years after this country’s creation, that core principle is still being called into question in many quarters.

The reactions on the part of many in the town hall audience were an ugly display of the soft pedal racism that so often undergirds liberal discussions of race, if the subject is even breached at all. There is nothing new in this: liberals were late arriving to the Civil Rights Movement, as well as numerous other justice movements in US history. 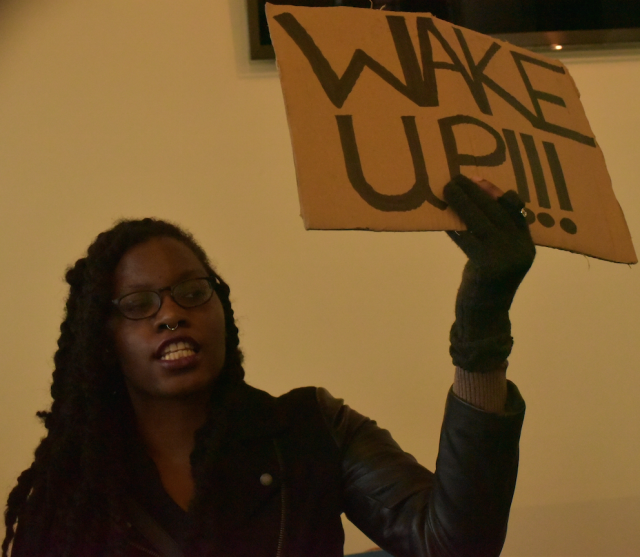 One of the Don’t Shoot PDX organizers shouted to the crowd that they should look around the room and notice that nearly everybody was white. Look around they did, but it felt as if the larger point was lost. It seemed much of the crowd was decrying the lack of manners displayed by the protesters, completely oblivious to the reality that the protesters were fighting for justice for those who were never intended to sit at the table. Throughout its history, the purpose of police in the US has been to keep in place marginalized people—particularly people of color, but also poor and working class people–who might otherwise rise up against the status quo.

For a few minutes, Wyden regained control of the meeting. Patriotism is the last refuge of a scoundrel, and the senator introduced a 100-year-old man who had served in World War II. It was a touching moment, one that was respected by all people in the room. But once it was over, Wyden had no place to hide, spitting his usual bromides about how these are important issues that need to be discussed and will be top priority when he gets back to Washington. That is more or less how he speaks about trade issues, and so why not try it out on police violence, too?

Well, for one, there is something visceral that white men in this country can really never understand about being part of a group of people who are systemically being gunned down by police and knowing those police are just outside the doors of the room you are in. So Wyden’s pabulum did not fly at all. It was a terrible example of leadership.

Wyden fled the meeting, retreating behind a clutch of security guards. Contrary to corporate media accounts, the meeting was not canceled. About 100 people remained, engaging in real conversation about various issues. Without Wyden and his accompanying political platitudes, the meeting actually became substantive.

It’s not clear if much was really missed by those who showed up hoping to ask questions about Wyden’s position on Fast Track and the TPP, but once Wyden left, the meeting became an opportunity for greater solidarity as the violence people of color have long experienced in this country has slowly made its way into the middle class and will be further extended if the TPP passes. It is an inequality will continue to be enforced by police. In fact, fighting the impact of state sanctioned violence against Black people should also be an urgent fight for those who currently have enough privilege to avoid that brutality, but soon may not.

As the organizing of the ORFTC, Don’t Shoot PDX, and 15 Now PDX have shown, these problems are not going to be solved by politicians like Senator Wyden who serve their corporate paymasters instead of the people who elected them. Rather, these movements highlight that politicians such as Senator Wyden are standing in the way of those solutions.