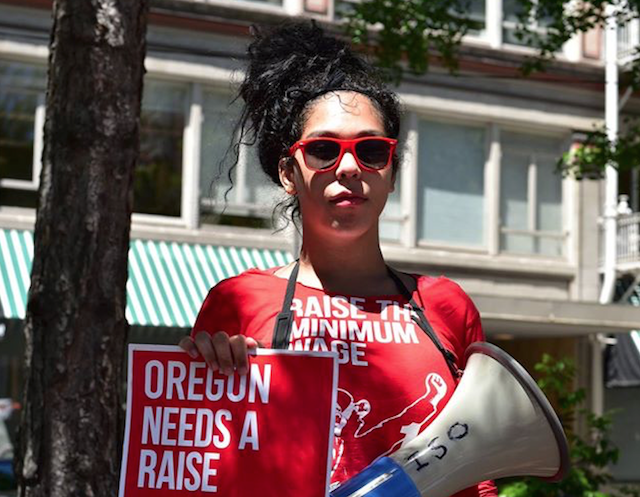 Story and photos by J.R. Robertson

In a shocking change of course, Oregon Democrats in the legislature have decided to stop acting like Republicans and ram through a new minimum wage law that will be an actual living wage. The bill, which is expected to sail through an emergency legislative session to be convened by Governor Kate Brown later this month, will raise the wage floor to $22.50 an hour as soon as it becomes law.

Yearly changes to the wage will be pegged to a more expansive definition of inflation that will not be based solely on basic survival needs. It will also abolish the preemption law forbidding localities from establishing their own minimum wage. Brown said she will sign the bill “as soon as it lands on my desk.”

“This is a huge win for the working class,” said Justin Norton-Kertson of 15 Now PDX. “Oregon has become the first state to actually, really end poverty wages.”

The new law will be part of a package of “Pro-Life” laws that will also address issues of rent control, houselessness, and police violence, all of which are expected to pass during the upcoming special session as Democrats gain some long-needed spine and seek to distance themselves from Republicans.

While the recent abbreviated legislative session made some minor headway in the area of the minimum wage, it fell short of what working people in Oregon were looking for, and more importantly, it did little to change the overarching reality that it has become almost impossible to work a minimum wage job and make ends meet. Between low wages and skyrocketing rents–particularly in Portland–people find themselves increasingly squeezed out of what was once considered one of the most livable states in the country.

The minimum wage law which emerged from the shortened session earlier this year was the result of pressure due to the hard work of many activist groups, particularly the 15 Now campaign which was readying a ballot initiative for the November election. Had that initiative passed, the minimum wage throughout Oregon would have been $15 an hour. The bill Brown signed into law on March 2 created a triple tier which would have seen the minimum wage raised to $14.75 per hour in Portland, $13.50 per hour in smaller cities, and $12.50 per hour in rural areas by 2022.

During negotiations, Brown had herself attempted to water down the demanded $15 an hour minimum, proposing in January that the Portland wage be dropped a dollar from $15.52 per hour to $14.50. Brown’s conservative-leaning proposal came after a meeting with business and labor leaders in an effort to pass a bill that would make it unlikely that 15 Now’s ballot initiative insisting the statewide minimum wage be $15 per hour would pass. 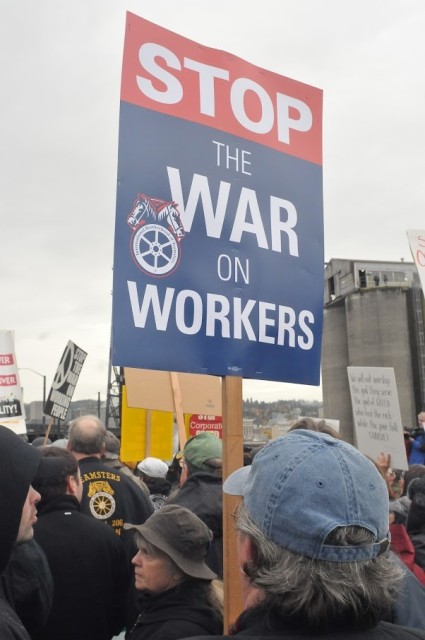 “You’re probably wondering why I met with business leaders to discuss the minimum wage,” Brown said at a press conference this morning. “I really have no idea why I would do something that stupid. What was I thinking? Why would business leaders want to do anything but lower wages and benefits? They would put children to work if it would save a buck. Actually, they did do that about a hundred years ago, and when people wanted to end that practice, the business community complained that it would be the end of the world. Guess what? The sun still rises, the Earth still spins, and we’re still here.”

When asked about the concerns businesses have raised about hiking the minimum wage at least $22.50 an hour, and tying it to inflation, House Speaker Tina Kotek said, “Every time you try to do anything to help working people–things the business community will always oppose–they have the same stock reply: we will have to lay off workers. It’s rubbish. They don’t care about workers–not in any meaningful sense. They just want to make as much profit as possible, and the easiest way to do that is to pay their workers as little as possible. If they cared so much about their workers, they would have been fighting to make sure workers always had at least a living wage.”

Only a few weeks ago, Kotek was like many Democrats who have been overtly acting like Republicans. According to Oregonian reporters Ian K. Kullgren and The Traitorous Denis Theriault , some Democrats had been looking for ways to roll back the gains of the law that Brown signed in March. In particular, both Kotek and Senate Majority Leader Ginny Burdick had stated they would seek to lower the minimum wage for young people.

“Yeah, that was ridiculous,” said Burdick, who in 2006 sided with business interests in opposing Portland’s Voter Owned Elections that helped Amanda Fritz win a seat as a City commissioner. “It’s kind of like that weird scene they had in Portland with the part-time Recreation workers who were making less per hour than their full-time counterparts despite doing the same work. It’s unfair, and frankly, it’s also selfish and stupid.”

The move to raise the wage has been bolstered by California’s recent move to a statewide $15 per hour minimum wage and similar impending legislation in New York. “The Golden State’s raising of the minimum wage,” said Kotek, “was the result of intense organizing by working people in California. They forced that law, and I suppose it is a reasonable start. But really, should people have only a wage that allows them the bare minimum of survival?  We’re humans, not beasts, and it’s time we started treating people as such.”

California’s wage increase, much like Oregon’s under the current law, takes a long time to phase in. Only in 2022–after a series of increases–would it finally reach $15 an hour. “$15 an hour certainly is better for a minimum wage,” said Brown, “but it hardly cuts the nut when it comes to paying for rent and food. A person would have to work 70 hours a week to make ends meet. And what about some of life’s simple pleasures like going to a movie or a soccer game a couple of times a year?  All people have a right not just to survive, but to enjoy life.” She then paused to venerate before a photo of the late, great Johan Cruyff.

Why the sudden change among these Democrats who for so long, particularly on economic matters, have embraced conservative and neo-liberal economic ideals that devastate working people, their families, and their communities? Certainly the work of the 15 Now campaign–as well as groups who worked with it in solidarity, such as Black Lives Matter Portland and Don’t Shoot PDX–had much to do with it, quickly burgeoning into a powerful movement since its inception in early 2014.

Kotek said, “We were forced to do this. Those 15 Now people really applied a lot of pressure, and they are reaching out in solidarity to other groups. They will soon form a powerful political bloc. How long can you keep squeezing people before they take up the proverbial pitchforks and torches? For too long people have had two choices: side with fascist types like Trump or Cruz, or vote for the corporate Democrats that have come to dominate the Democratic Party. But 15 Now is showing people they can take control of things and get involved with other people working hard to make real change, not just slight tweaks to this unjust and unfair capitalist system. If they keep at it, they will bring the system and the 1% serviced by capitalism to their knees.” 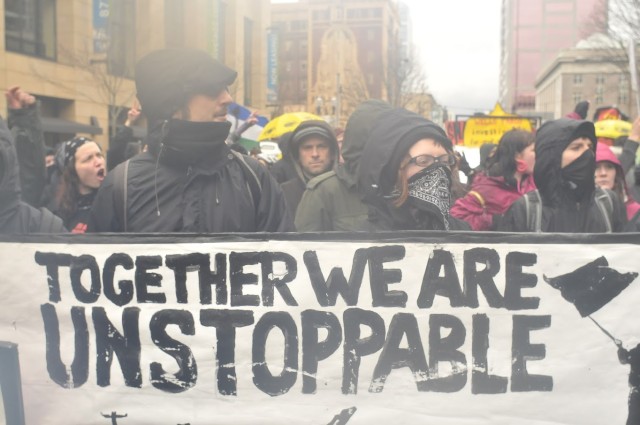 Alyssa Pagan of 15 Now PDX is pleased with the new path being taken by Oregon’s Democrats. “I used to think we needed a third party to get anything done; that the Democratic Party was long sold off to big business. God bless Governor Brown for proving me wrong, and for her loyalty to the working class of Oregon.”

“That working class fervor isn’t going to go away,” added Norton-Kertson. “We are going to keep building and fighting both here in Oregon and across the country.”

“Raising the minimum wage to a real living wage just makes sense,” said Burdick. “We live in a consumer economy–which is a problem unto itself–but nonetheless, that is so. If we are to have such an economy–and there is no reason why we can’t have an economy based on what people need instead of one that puts outrageous sums of money into the hands of a select few–people need money so they can buy stuff. The new minimum wage will make sure people have more money to spend, and as well will provide more revenue for the state. Imagine how many great things we would be able to do if we hadn’t given that stupid tax break to Nike. Even better, imagine if the workers just took over Nike.”

Not all Democrats are on board. Senate President Peter Courtney could not be reached for his opinion, having barricaded himself in his office, worried sick that people might start protesting or something similarly terrifying. However, slid under his office door on the end of a stick, was a note clearly written in a delirious state, reading, “We cannot get out. The end comes. Drums, drums in the deep. They are coming…”

But in this case and with the other upcoming Pro-Life laws, it appears Courtney and his Republican-lite ilk will be swept to the political winds.

“Good riddance,” said Brown. “They can take their corporate sponsors, including the ones to which I used to be beholden, and shove off. Sometimes we forget we live in the wealthiest country in the history of the world, and in the 21st century at that. The way we–including so many Democrats such as myself–have acted with such abject fealty to the wealthy, you’d be forgiven for thinking this was the Dark Ages. Or a Republican controlled legislature.”