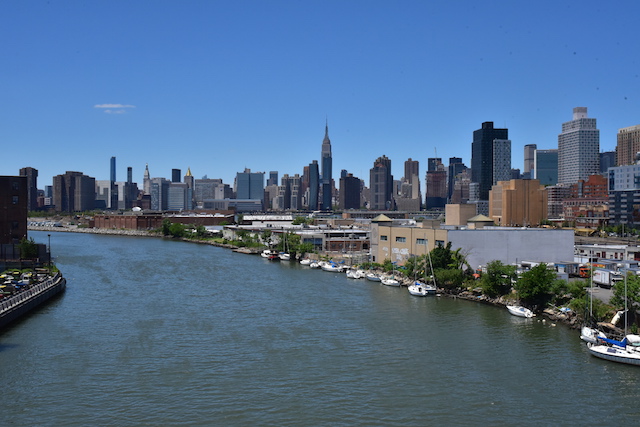 The Newtown Creek which separates Brooklyn (left) from Queens (right). In the far background is Manhattan.

It will come as no surprise to anyone who knows me that I come from the sewers. Well, that is a bit of an exaggeration. However, the parcel of land once known as 256 Eagle Street in the Greenpoint neighborhood of Brooklyn, New York, is now enclosed by the gates of a sewage plant, or as it is now called, the Newtown Creek Wastewater Treatment Plant. Once upon a time, Eagle Street extended all the way to the Whale Creek which leads to the Newtown Creek, a waterway that only a short distance away finds confluence with the East River. On March 28, 1925, my father was born there, the fifth child of John and Matilda Shaw.

The family did not stay there long. In fact, as I walked around Greenpoint a few weeks ago during my annual summer family visit to New Jersey and New York, it became clear they never stayed anywhere too long. Money was tight, and after the Great Depression hit in 1929, everything was a tough dollar.

I had with me a lengthy list of addresses, almost all within a circle whose diameter was less than a mile. While I had been to Greenpoint before, including a memorable jaunt with my dad when I was about 8 years old–momentous because he took me to a place that had a real soda jerk, the only one I had ever seen until a few years ago when I found out about another one, 3,600 miles away, on Sandy near the Hollywood Theater–I never had enough time to try and grasp the feel of the area.

It was a gorgeous, albeit hot and humid, day for walking and exploring. And it was made all the more wonderful with the presence of two longtime Friends, Dave and Howard. For many years they have been subject to my wanderings–mentally and spiritually, as well as physically–and they have never offered complaint. When I approached them with the idea a few months ago, they were game. We met outside the Port Authority Bus Terminal, by the statue of Ralph Cramden, and grabbed a 7 train to Long Island City. Exiting the station, we found the Pulaski Bridge and crossed the Newtown Creek. 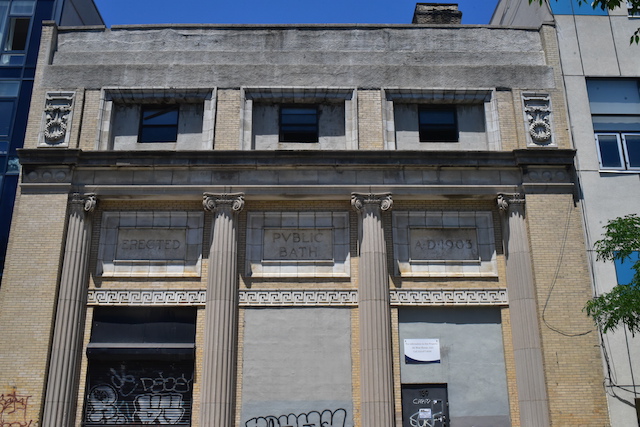 Facing Manhattan, there were no obstacles along the river impeding our view. This was true 92 years ago when Manhattan Avenue, which now ends near the creek, crossed a bridge to Queens. My dad told me that his older sister Dolly often crossed the Vernon Avenue Bridge–you leave Brooklyn on Manhattan Avenue, but enter Queens on Vernon–and he also mentioned he and his brother Kenneth doing so. I presume they did not swim the creek, although if my dad did so, it might explain something about me, as the waterway was a cesspool of raw sewage and various byproducts of oil, chemical, and copper smelting plants.

The bridge was demolished in the early 1950s, replaced by one markedly similar to Portland’s Burnside Bridge.

After seeing my dad’s birth house, we walked a few blocks south to Huron Street and followed it westward. Along the way we saw a building that had been a bath house. Howard speculated that at one point it would have been where people showered when their homes did not afford that luxury (something my father later confirmed). I have seen other such buildings in the city, most of them from the early 20th century. Their designs, no doubt an homage to Rome and its baths, resemble the architecture of that eternal city. Cleanliness next to godliness, indeed.

Huron eventually runs into Franklin, and if there ever was a sign that the Shaw family–at least our manifestation of it–never quite made enough of a mark to be recognized much further than the stoop, it lies on the southwest corner of where those two streets meet. A year after my dad’s birth, his family moved there. But what the house looked like, I could not tell you. It is now a vacant lot overgrown with weeds and cars. 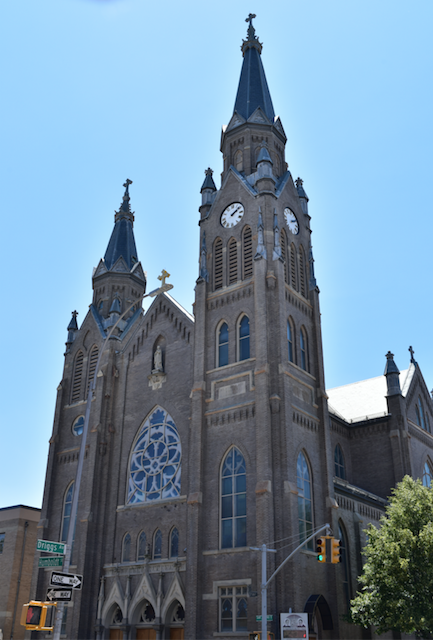 On one day, fun filled the air near that corner. When my dad was between 7 and 9 years old a truck full of toys spilled its load. Whether my father snatched any remains unknown.

Monitor street beckoned the year Franklin Roosevelt first took office. But only for a short time. Making our way south and east, we came upon Eckford Street. I am not quite sure if my father’s father made the trip. The senior John died from tuberculosis when my dad–the junior version until that moment of passing–was young, perhaps ten years old.

By the time the family moved to Eckford, the Great Depression was in full swing, as was the New Deal. During the most recent primaries, some people, including many Democrats, considered Bernie Sanders too radical for espousing programs that due to the New Deal became as American as apple pie and Social Security, as well as others that reflected the spirit of those programs that to a greater extent than ever before in our history valued people over profit. How easily and so often willingly we ignore, spit at, forget, and eventually discard our history.

Then, it was two blocks east to Diamond Street, where Dolly and her family lived in a separate space apart from the rest of the Shaws who lived there. While there, Japan bombed Pearl Harbor and when my dad turned 18 he went off to England to serve in the 8th Army Air Force.

A few blocks from that house, you are reminded that you are in a Polish neighborhood, something that would have also been true when my father was growing up. Saint Stanislaus Kostka, a beautiful cathedral, bears witness to that, as do the numerous shops catering to Polish customers. Howard asked if anyone wanted to grab some pierogies for lunch. Dave, perhaps questioning Howard’s sanity in yearning for such a heavy food on this 90 degree muggy day, declined. Besides, our interest was strong drink to cut the humidity.

Smitty’s, or at least the building that once housed the bar that my dad knew by that name, sits on the corner of Russell and Nassau, across the street from Monsignor McGolrick Park. The windows, clearly not modern, were perhaps the same ones my dad looked through when grabbing a drink there. I would have liked to do the same, but it was closed. I am not sure why. It was Sunday, but one person’s church is another person’s pub.

My curiosity nearly satisfied, we made our way toward the Williamsburg Bridge, the hipster vibe growing stronger with each step toward it. Along the way, we broke bread at a place within spitting distance of McCarren Park, a place where my dad might have swam on hot summer days. Once upon a time, New York City was one of many urban areas that had beautiful public pools, often products of the Works Progress Administration. They are not so common anymore. But yet, a few years ago, the pool in McCarren was refurbished and reopened after shuttering in 1984.

Meals with Friends are good things. Fine conversation, of past, present, and future, let us update where we have been and make plans for where we are going. With people with whom I am so close, it is always where we are. 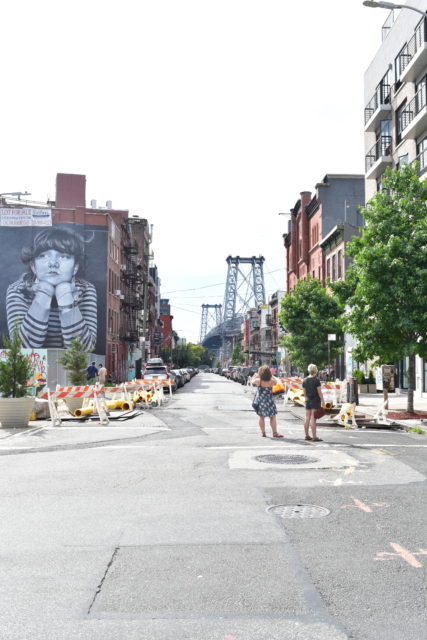 A few blocks up Manhattan Avenue, we saw the last of the extant places where my dad lived. Dave left us, and Howard and I headed toward the bridge, just as my dad’s mother did 113 years ago on December 19, 1903. On that day, the Williamsburg Bridge opened, and like my grandma over a century ago, we readied to cross to Manhattan. Near the base of the bridge is a series of buildings that replaced yet another place where my father used to live.

In my mind, that place forms a neat temporal nexus. In the early 1980s, Sergio Leone filmed much of his last movie, Once Upon a Time in America, there. It is one of my favorite films. I highly recommend it, although Howard insists it is too glacial. Glacial it is. But it is also perfect.

And so was that day. There is something I find comforting about walking around places with which my ancestors were once intimate. Time ebbs, flows, and even stops. If you have the right set of eyes, you can see what once was as clearly as what now is.

Later in the week I took my dad to visit his sister, Dorothy. She is his last remaining sibling and lives in Rockville Centre, out on Long Island. My mom used to teach there, and my brother was born there.

My cousins Adrienne and Mary came by as well. When Mary entered the room she said hi to my dad, her Uncle “Jawn.” I later commented how nice it was to be around four people with Brooklyn accents. Mary informed me in that wonderful First City way that she had no accent. In doing so, she called me “Peetah.”

I showed Aunt Dorothy the photos I had taken of where my dad had lived, which aside from what is now the sewage plant, were also places she had lived. She remembered growing string beans on Eckford Street as well as draping a hose over a tree branch on a hot day and playing in the water. Sometimes sprinklers were set up in the streets to help kids cool down.

The memories about their childhoods that people prioritize–as well as those they leave behind–always intrigue me.  My father’s and Aunt Dorothy’s formative years, with far less housing stability than I have ever known, occurred with the Great Depression as their backdrop. Times were tough, and the landlord was always at the door looking for the rent. Yet most of the stories I have heard from them, including the constant moving to which I bore some witness so many years later, favor the good moments by a wide margin over the bad.

I noted to Aunt Dorothy how it seemed they were always on the move.

“We eventually lived everywhere,” she said.