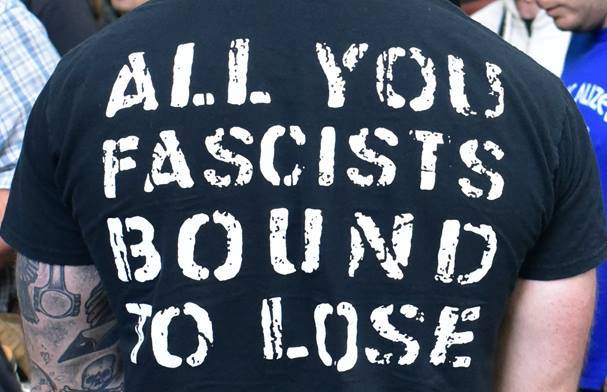 When considering how to spend a Friday night, particularly a sultry one in late July, likely not high on most folks’ list is attending a talk on Pan-African organizing. But even if my Friend Ahjamu Umi of the All-African People’s Revolutionary Party (A-APRP) was not the featured speaker, the title of the program, Pan African Organizing 101: Our Blueprint for Our Contribution to Worldwide Peace & Justice, seemed important enough to warrant attention. The A-APRP has done vital organizing in Portland over the past few years, in particular its breakfast and education program in New Columbia that expanded into the School of African Roots (SOAR), work that has continued since Umi left for California over a year ago. On any given night, it would be important to garner the A-APRP’s collective wisdom.

But with the fascist white supremacist group Patriot Prayer holding yet another recruiting drive and rally in downtown Portland on Saturday August 4, it seemed a better than usual idea to listen in about the various principles, strategies, tactics, and general organizing engaged in by a group like the A-APRP. For 50 years, it has offered a model of effective organizing, and the A-APRP’s work provides a useful template for other groups organizing for greater justice and against white supremacy.

Umi’s presentation was informative. He talked about the history of the A-APRP, some of the organization’s more prominent figures (including two members who had recently, to use Umi’s term, transitioned), and most importantly, the methodology, goals, and strategies of the A-APRP, grounded in what it calls “scientific socialism.” In other words, favoring data over anecdote when figuring out, for example, what tactics are successful and what changes must be made for those tactics to work better in the service of obtaining that unified, socialist Africa which the A-APRP believes will bring true freedom for all Africans across the globe.

It was interesting stuff, and the crowd of over 40 people was clearly immersed in it. Many of them were from other organizations, such as the Portland Committee for Human Rights in the Philippines and GABRIELA, whose goals, like those of the A-APRP, are liberation for all oppressed and colonized peoples.

What really grabbed me was when Umi talked about the importance of joining an organization–particularly one with a work study program–fighting for greater justice. In particular, he stressed the importance of people taking the step to join any organization “so they understand the journey,” urging the audience to let people decide for themselves where they go from there. 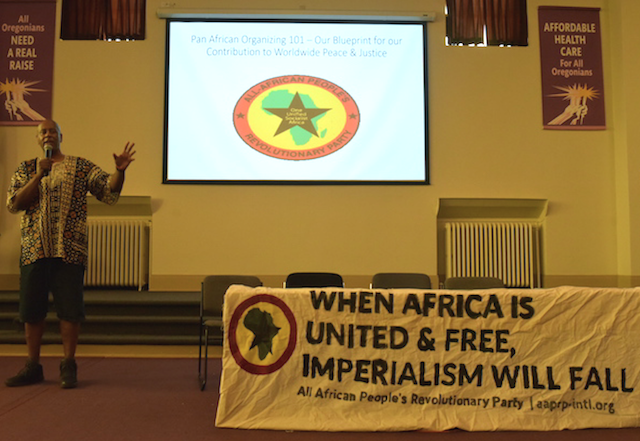 “Let people figure it out,” Umi said. “But get them started.”

Umi also implored the audience, “Stop criticizing where people are at. Bring them along.”

Bring along people like my Friend Steve. He recently attended a meeting of a group fighting for immigrant justice. Until he joined that group, the most involved it seemed he had ever been was urging people to get out and vote, taking stands for the Democrats. Steve was appalled by the tearing apart of families at the Mexico-US border and was looking for some place where he could have an impact. Good for him, and good for that group: Steve not only is a good person, he has one of the most impressive analytical minds I know. He is kind, and he has a good sense of humor.

Bring along people like my buddy Stan, who donates money to a leftish sort who has an internet radio program that tackles issues that corporate media either does not cover or does not report on in detail. Stan is great with people. He says he wants to get more involved, and perhaps he will.

And bring along people like another Friend of mine who recently confided in me that she isn’t as politically involved as she should be. She seemed to be looking for a place. Part of her “lack of involvement” includes attending her town’s board of education meetings and taking a general interest in its schools. She received an award for her dedication, a very fine quality that is always in demand. As well, she is also a music encyclopedia, something also of great importance because every movement should have a solid backbeat.

We all know these people. We see them every day. We talk with them, share food with them, attend houses of worship with them, and craft other forms of community with them. They are all at different places. Like all of us, they have particular talents that would prove useful to any organization pushing for greater justice. They are all people who on some level realize that white supremacists like Patriot Prayer must be resisted, and fascist white supremacist ideology must be destroyed.

And as Umi urged, we must bring them along. 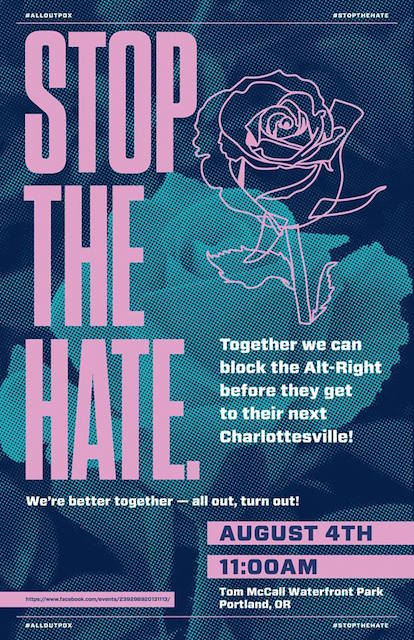 Since Republican Donald Trump’s election, some of the more militant resistance to white supremacy has come from a collection of groups often erroneously labeled Antifa, although their politics are certainly anti-fascism. Those groups’ work has been the subject of numerous news stories, usually taking a negative light, as if opposition to fascism, Nazism, and white supremacy were something bad. Considering that coverage, it should not be surprising that some people worry about these groups. More reasonably, some also worry about attending an anti-white supremacy rally and getting caught in a wildcat melee between anti-fascists and white supremacists.

That tension is fueled by the corporate media’s supposedly objective position providing both sides of the story. My guess here is that when my father fought Nazis in World War II, there was only one side to the story in the US corporate media, and it was not the fascist one. At least at that particular time, anti-fascism was understood as a just and moral stance.

Portland has come up with a solution that might help bring along more people who are looking to get involved, but at one level or another are worried about the possible consequences. On Saturday, the Popular Mobilization Group, also known as Pop Mob, will be setting up numerous protest sites in an effort to bring out those people who oppose white supremacy, but do not wish to engage Patriot Prayer as militantly as other groups. Pop Mob is part of a wide-ranging coalition including Portland Jobs with Justice, Service Employees International Union Local 503, the Western States Center, the Portland Immigrant Rights Coalition, KBOO 90.7 FM, the Portland branch of the Democratic Socialists of America, and the General Defense Committee of the Portland Industrial Workers of the World that on Saturday will be standing against white supremacy and fascism.

Diversity of tactics, indeed. All you need to gain entry is a keen yen for opposing white supremacy and its attendant bigotries.

It is important to remember that it was only 15 months ago that a supporter of Patriot Prayer, Jeremy Christian, murdered two people on a MAX train, slitting their throats when they confronted him for hurling abuse at and threatening two Black women he perceived to be Muslims. That memory is still fresh in many people’s minds, as are the horrific images from last year’s Unite the Right white supremacist rally in Charlottesville, Virginia. And it was only five weeks ago that Patriot Prayer’s cadre of white supremacists–many of whom were bused in from out of town–beat people in Portland’s streets during one of their rallies.

“Pop Mob came together in response to the dramatic increase in violence witnessed in Portland on June 30 during Patriot Prayer’s most recent rally,” wrote Effie Baum of Pop Mob in an email. “We are activists and organizers that come from all walks of life. We’re parents, teachers, artists, union members, healthcare providers, receptionists, food service workers, and students. Being against white supremacy, patriarchy, homophobia, transphobia, ableism, and economic inequality is what makes you an anti-fascist and WE ARE ALL ANTI-FASCISTS. We formed our coalition around a single unifying goal: to inspire the people of Oregon to show up and resist the alt-right. We know that we far outnumber those who support them and that we are more powerful when we come together as a community. We don’t have to import supporters from all over the country like they do. We have a strong and resilient community right here. We just need to show up and defend our city against their hate.”

Saturday’s rally will begin at City Hall at 10:30 AM. Following that, there will be a march to Waterfront Park “to unite as one anti-fascist community opposed to Patriot Prayer and its violent, far-right agenda.” For more information, please go to: https://www.facebook.com/events/793756637681487/