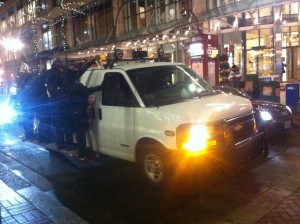 Occupy Portland activists gathered for a rally and march in Pioneer Square today, but met with violence by the police department when they attempted to take the street. Fired up by the police action, the protesters, already in a mood colored by the shooting of man today in downtown Portland by police, spent the rest of the night marching through the streets, ending up in a vigil on the steps of the Justice Center.

The night started peacefully, as activists met at Pioneer Square, and made speeches and shared food. They met to remember the one-year anniversary of the Egyptian uprising in Tahrir Square, in the center of Cairo. Today, in Egypt, protesters gathered once again in Tahrir to protest the continued repression by the interim government, controlled by the army.

After the rally, protesters began an unpermitted march. Protesters started to march in the street, but police pushed them back onto the sidewalk, raising tensions. The march arrived at the PSU park blocks in the Southwest part of downtown, and a moment of silence was held for Tahrir. The mood calmed down, and the protesters returned to being reflective.

The march started up again, and though it was mostly on the sidewalk at this point, the police began selectively enforcing jaywalking ordinances, writing citations for particular individuals. When marchers objected vocally to the citations, saying it was unspecific and unclear what ordinances were being enforced, arrests began. Many police officers arrived, some wearing protective riot gear, and pushed the march up onto the sidewalk. Witnesses say that police grabbed peoples’ bicycles on the sidewalk, and began pulling at them. A boy was punched repeatedly by a police officer on the sidewalk, for reasons that were unclear. Livestream equipment was broken by police blows. Several protesters were detained, and some were arrested, others released. Witnesses report that the police were targeting individuals, on an unknown basis. “That one, there,” said an officer, pointing at a male protester who was then tackled and arrested. Several protesters were hit with fists and sticks while on the ground.

The marchers responded by heading to City Hall for a dance party. After a little while there, near the permanent vigil to end the camping ban, the march moved to the block of Main Street between Chapman and Lownsdale Parks, the parks that the Occupation had been evicted from two months earlier. Some protesters gathered on the elk sculpture in the middle of the street.

At this point, police on horseback arrived. Rather than attempting to move the protesters on the statue, they moved against the protesters on the northernly sidewalk, pushing them back against the large security fences that still surround the park. Two women, including a Livestreamer, were arrested. They were thrown onto the ground, and then tossed into a van. One woman was forcibly slammed in the door of the van by officers, on purpose. The famous disco-trike, the music broadcasting unit of the Bike Swarm, was impounded and its rider arrested.

The march returned to Pioneer Square. After a short period of indecision, the protesters decided to go on the march again. Followed by police, the march went North on SW Third Avenue, now entirely on the sidewalk. Diners in restaurants looked out the windows curiously as the protesters went by, shouting “Whose Streets? Our Streets!” They looked oddly at the tent monster, which was helped by his fellows over the uneven squares of the sidewalk. A teenager, who remained unidentified, appeared out of a side street and threw three lit road flares at the march. Peace and Safety volunteers from the march caught him, and released him after he promised not to do it again. 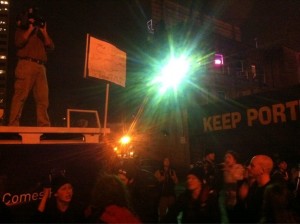 At this point a news van from KGW showed up, and a camera person began filming. A few agitated members of the crowd approached the crew, yelling at them, asking them where they were when people were being arrested. They chanted, “Show the Truth! Show the Truth!” The camera person backed up, eventually climbing onto of his van, evidently threatened by the crowd. Other protesters mic-checked the crowd, and asked them to calm down. The many members of the march that had grown as it wound through the streets and others arrived, began to twindle, as people were turned off by this spectacle. Eventually the march moved on.

Heading up Burnside to Broadway, the march swung South again. The police had trailed away, and the protesters took two out of three lanes of the street. Traffic drove around, though slowly. Upon reaching Pioneer Square, the march sat in the street for two traffic light rotations. Though there was a lane clear, at least one driver sped angrily around the protesters and through a red light, narrowly avoiding hitting a protester seated in the adjacent lane.

Then the march continued again, heading to City Hall. The front door had been mistakenly left open, and for a moment protesters entered the lobby. Most of them left when the security guard confronted them, except for one man who took off, and began running the stairwells of the building. The forty or so protesters that still remained went across the park to the Justice Center, to wait in vigil for the people who were arrested. A number of officers came to City Hall, and went in to arrest the man still inside, who was charged with trespassing.

And with the vigil, the night ended. What might have been a peaceful march and rally became a long, twisting night, marked with police violence. Emotions ran high, due to the police violence, on top of the news of the earlier, unrelated shooting. The activists from Occupy Portland do not easily suffer abuse at the hands of the police, and respond by claiming the street as their own. But it was a shame that such violence instigated by the police had to color a night that ought to have been filled with thoughts of compatriots in in Egypt, who even now suffer worse violence and murder at the hands of that nation’s army and police force. For Occupy, the mission is international, and while anniversaries happen but once a year, the struggle is constant.