‘De-arrest‘ – Street tactic used by marchers and protesters who directly engage with police to assist in the escape of individuals who are in the process of being arrested. When a participant is apprehended by authorities, one or more people will rush the officer an attempt to either confuse them or pull the arrestee back into the crowd.

Let us remember that we can be aggressive in our defense of our comrades without escalating a situation. In the video above, note that the police officer is unprovoked as he attempts to arrest the man whose hands are zip-tied. But then he marches with mace in his hand, dragging the potential arrestee and spraying indiscriminately as protesters swarm, braving mace-in-the-face, to have the man de-arrested. 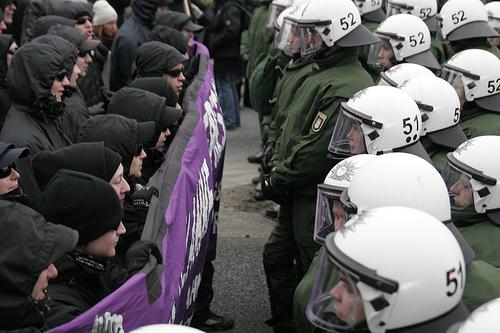 The police in the US continue to demonstrate their unwillingness to be reasonable and accept that the Occupy movement exists to help the 99% (police included) secure their food supply, their employment and wages, their health care, their financial system, and truly the global economic and governance systems which dictate the terms of all such subsystems, for a new generation. The police continue to defend the interest of the corporate state against the underclasses. In the face of continued police repression, it is not out of the question that tactics such as the de-arrest may become increasingly useful, to demonstrate to the police and the empire they defend that we will not stand idly by while demonstrators for peace and justice are attacked and imprisoned.

De-arrest uses the primary advantage of the mob over the police: numbers. In much the same way as a bike-swarm, or a “critical mass” or “flash mob” event can shut down a street while hundreds or thousands of bicyclists or pedestrians or dancers take it over, a de-arrest or similar coordinated mob actions can prevent the illegitimate arrest of activists during peaceful demonstrations through sheer force of numbers.

Other tactics we can use to defend ourselves include:

On the topic of property destruction, let it be known that self-determined, random acts of destruction are not group tactics. Planned and executed properly, such an action is coordinated against specific symbolic or legitimately-oppressive targets such as “banks, institutional buildings, outlets for multinational corporations, gasoline stations, and video-surveillance cameras.” Randomly attacking a corporation (or God-forbid small, locally-owned business) or the property of individuals (including their fancy SUVs or suburban homes) is not a defensive black bloc tactic, it is escalation of the conflict on other terms than are relevant to the conflict.