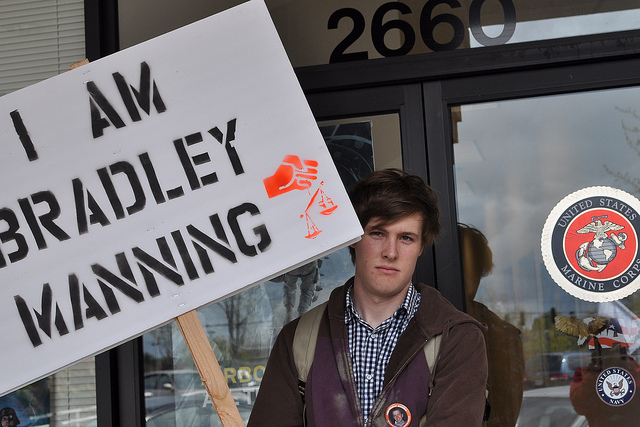 The US government considers Army private first class Bradley Manning a threat. Such a threat, in fact, that he was held in military prison for over one and a half years–including 10 months in virtual solitary confinement–before being arraigned.

Chanting “Free Bradley Manning!” and urging potential enlistees to reconsider, protesters gathered outside Portland’s City Hall on April 24, 2012 for a rally and speakers (including one celebrity guest, Cobra Commander) and then distributed themselves to five separate armed forces recruiting centers in the Portland metro area, as part of a national day of action demanding justice for the incarcerated soldier. Manning faces charges of passing national defense information to Wikileaks and aiding the enemy. The soldier has become a rallying point for many different social justice groups, ranging from those fighting US imperialism, to those opposed to the creeping national security state. 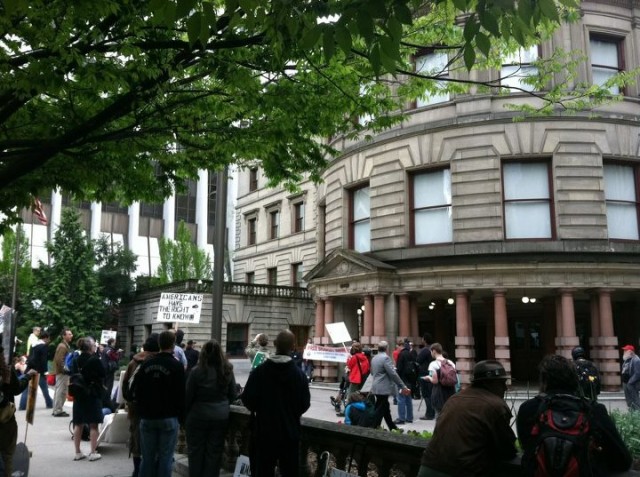 At one of the distributed actions, a crowd of 15 people gathered outside the military recruiting center on Northeast Broadway and 14th to protest Manning’s treatment and demand his release. “What really bothers me,” said Taco, one of the protesters, “is the lack of due process. It doesn’t matter who you are. You don’t go to jail for nearly two years without a trial.”

Auntie, another protester, had come out because he felt Manning was being used as a scapegoat. “We’re supposed to be about freedom and democracy. Shooting people with missiles is not that. We preach that we should be speaking up for truth, but when Manning did that, he was punished. This is how you treat people who truly defend our country and its values? They are torturing him.”

Taco added that, contrary to how Manning is often portrayed, if he did in fact pass information to Wikileaks, his actions made the country more secure and helped spark democratic movements across the globe. “Civilian and Homeland Security make us less secure when they act without restraint and with secrecy. Occupy is a direct result of Manning’s supposed leaks, and the Arab Spring began five days after the release of that information.”

Michelle, a protester who originally ignored the Wikileaks scandal, and had for a time dropped out of politics because she had come to accept that “politicians and media would always lie” found her passion rekindled by the Occupy Movement. She latched on to Manning’s case, because it represented an inversion of the “truth, honesty, and ethics” in which she believed. “This is a two-layer issue,” Michelle said. “First is the military coverup of information pertinent to our everyday lives. Second, Manning decided to show the truth. As a member of the military, this was wrong. But as a human, he realized he had to do this.” 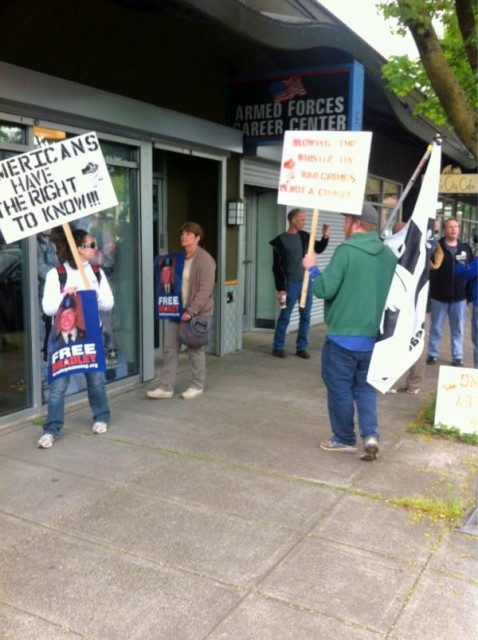 At an armed forces recruiting center in Beaverton, a small, sedate group of seven protesters began their picket of the recruiting office at noon. Within the hour, the recruiting office locked its doors. A few staff left, taking pictures as they passed by. Most remained locked inside the office. There was little traffic, and in the early hours of the action, observers who spoke with the protesters were in unanimous favor of the action. Employees of nearby stores stepped out to say, “We’re on your side.” Gray-haired people stopping at the bank commented, “Thank you for coming out. We agree with you.”

A few bystanders asked, “Who’s Bradley Manning?” but as the activists began to explain, they nodded, “Oh yeah, him.” Everyone had heard of WikiLeaks. The protesters collected petition signatures and handed out leaflets. Some people hurried by and said nothing, but nobody complained. The number of protesters eventually dwindled to five.

At around 3 p.m. seven more Occupiers arrived and began chanting. Initially the chant was “Free Bradley Manning,” but by 3:30 p.m. four Beaverton Police cars had pulled up, and the chants shifted to “Fuck the Police,” and “Nazi Pigs.” A woman who had come to use the ATM said, rather viciously, “I hope the police arrest the lot of you! I should be able to bring my child to the bank without having to hear that.”

Some bystanders were sympathetic; others were merely curious. The Police presence increased. Soon there were eight police cars, a K-9 Unit, a Trimet car, a Sheriff’s car, two large black unmarked cars driven by policemen, and a large SUV. Each vehicle brought more law enforcement, resulting in 32 people at the height of the operation. Though not dressed in riot gear, they were certainly menacing, amplified by the dogs in the back of the K-9 Unit car. Nearing 4 p.m. a paddy wagon rolled up and police brought out the zip tie cuffs and put on their gloves. Two of the officers approached the picketers and requested to speak to the leader. Several protesters met the officers and explained that Occupy Portland is a leaderless movement. 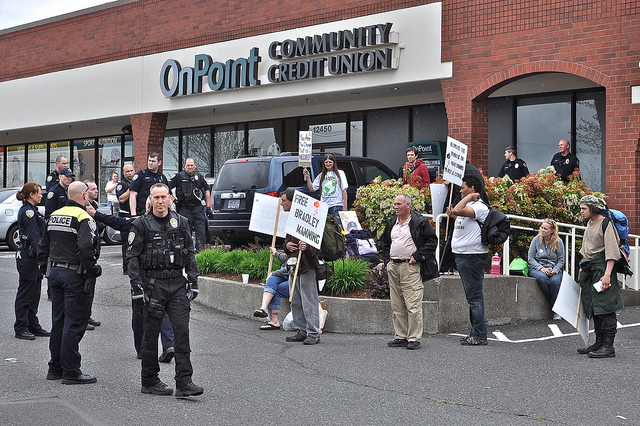 A young man who wanted to enter the recruiting office called out to the Police, “I can’t get in.” One of the officers made a phone call, stood with the potential recruit, and waited until a soldier escorted him into the station. Almost immediately afterward, officers fanned out to surround the protesters. Some were on the sidewalk, others behind parked cars, and some strode directly toward the protesters. The police approached the group and said, “We asked to speak to your leaders, and you told us you had no leaders, so there was no one we could negotiate with. Therefore we are telling you that you must leave this property immediately.”

The three arrested were charged with criminal trespass, in the second degree. As of now, they are still in jail, having had their security raised from $50 each to $500 each. 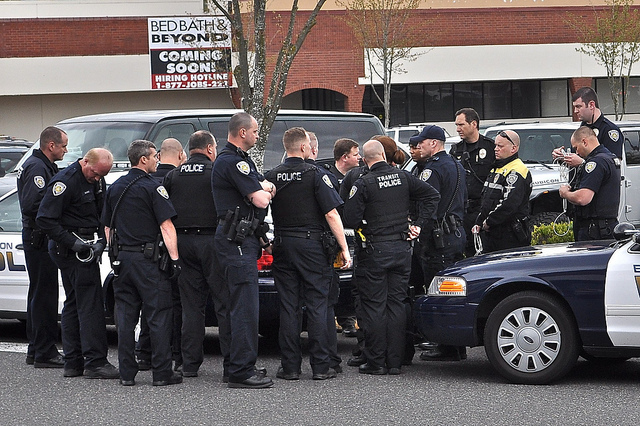 Another action in Southeast Portland successfully engaged the public on military issues and the Bradley Manning case. A noon rally next to a Walmart at 84th and Powell then shut down a recruiting station that hosts all four military branches – Army, Navy, Marines, and Air Force. Like the other recruitment posts, this too was located on private property. Police were already on the scene and waited until Rumorz coffee set up before informing protesters that they had to move to a public stretch of road. One has to question whether or not public tax dollars go toward maintaining 84th Ave between Holgate and Boise Street.

Even with the shift of location, protesters were not deterred. Some went undercover, holding a puppy in their arms and using their mothers’ accompaniment as a disguise, as they continued passing out informational leaflets and engaging in conversation with those shopping at the big slave-labor goods store. Others held signs and conversed with passers-by on 82nd Ave, the main artery for the poor and working class populations of Portland–those most targeted for military recruitment.

As one protester pointed out, the methodology of preparing our youth for war is “deeply immoral. [the US Govt] preys upon men desensitized by first-person shooter games and low self-esteem.” Just then, two teenage boys walked by. Asked if they were considering enlisting, one replied, “Yes!”. His all too common reason: financing a college education. The protesters quickly explained that there are many better ways to get educated and live in the world without actively feeding the war machine. For example, AmeriCorps and the Peace Corps both assist with educational funding.

Protesters went on to describe, in macabre detail, the way the the US government currently treats soldiers, which can simply be summed up with the phrase, “They Lie. We Die”. They told the boys why predominantly private military forces are being contracted in the current wars, and that no government body wants be accountable for the deplorable actions taking place overseas. Instead, unaccountable private contractors are running amok worldwide doing the bidding of the 1%. They warned the teens that more than a quarter of the houseless population are US veterans.

Another protester, who is a veteran, spoke up about her experience. “I enlisted in the Navy my junior year of high school. I wanted to go into the medical field and was told I’d be able to do so in the Navy. When I arrived to report for duty two days after graduation, I was moved to the construction crew, not the medic team. Those recruiters will tell you anything you want to hear to get you to sign up. Don’t believe a word they say.” She went on to share the story of S. Brian Wilson, a Vietnam veteran whose legs were run over by a US military train while protesting the shipping of US weapons to various US-staged coups in Latin America. This occurred four days after she had reported for duty and she remains visibly gripped by the shock. Wilson, ever an activist, will address Occupy Portland on May 9, at 7PM at St. Francis.

Needless to say, the teens were given a mouthful of information to digest. Among many other teachable moments, today’s action left a mark on at least two young men who may think twice before signing away their bodies to a government that is driven by the greed and inhumanity of the 1%–a greed and inhumanity that Bradley Manning risked his life to expose.

Threats to the Military, Military Threats

About 10 minutes into the NE Broadway rally, the recruitment office announced it would be closed for the next hour. Not long after, a group of four protesters entered the office and conversed with one of the recruiting officers. This recruiter told the group he had served nine tours of duty in Afghanistan. Asked by one of the protesters how he felt about the spate of photos showing soldiers posing with dead Afghanis and peeing on their corpses, the recruiter said the army had zero tolerance for such actions, but had no answer as to why these offenses continue to occur.

The common refrain from military planners has long been that releasing such photos endangers US troops, as Secretary of Defense Leon Panetta recently stated in regard to the Los Angeles Times decision to publish photos of US soldiers posing with dead Afghan soldiers. Panetta said, “these images bring further injury to our people, or our relationship with the Afghan people. Those kinds of photos are used by the enemy to incite violence, and lives have been lost as a result.” According to the US government, these heinous acts are only performed by bad apples, and while they are a shame, the acts themselves apparently do not endanger troops. Only their publication does.

Many protesters see Bradley Manning as a warning to other soldiers about what happens if they reveal to the citizens of the United States what is being done in their name. The danger of these leaks is not to the soldiers–for if our leaders really care about the soldiers, why are they still in Afghanistan when it is clear that the mission, whatever it was, has been a failure?–but to the supremacy of the military industrial complex and its many beneficiaries. The weakened economy already has people questioning why twenty-seven cents of every income tax dollar collected goes to our “defense” budget. Manning’s leaks, and the responses to his alleged actions, bring up uncomfortable questions about military culture and what that culture is doing to our youth, many of whom wind up at recruitment centers.

Our government is correct in labeling Bradley Manning a threat, but their reasoning is faulty. Manning is a threat because he was brave enough to expose uncomfortable truths about the US–truths that will command the time and attention of those who have the courage.

Update: Manning, who is facing court martial for his alleged violations, has been granted a tentative trial date of Sept. 21, 2012–more than two years since his arrest. A conviction could mean the death penalty for Manning, though the military has stated it will seek a lesser punishment in the event he is found guilty.