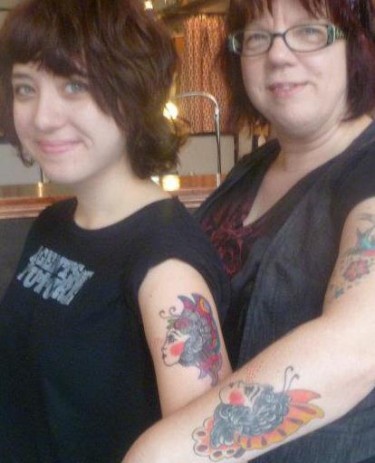 Today it was my privilege to sit down with Rose and Pam Hogeweide at Anna Bananas in North Portland to discuss Rose’s arrest on the morning of Occupy Portland’s eviction. They are a dynamic and strong mother and daughter that I first met after seeing proud mother Pam’s twitter posts announcing Rose’s first court date on December 13. They have been involved in Occupy Portland actions since October 6 and recently celebrated Rose’s 18th birthday in very Portland-like fashion with a tattoo that matches her mother’s.

I briefly visited with the family prior to court and we’ve kept in touch in social media circles. As was the case in many Occupy related arrests, Rose’s charges were dropped. By her account, this left Rose feeling very discouraged and ultimately dismissed, in the same way that she felt the entire Occupy Movement was dismissed and disregarded. In the next 90 days, Rose actively participated in several actions, such as Occupy The Ports, with the full support of her family. Still feeling no sense of closure about the initial arrest, they decided that they needed to take further action and filed a complaint with the City of Portland. As a result of this complaint, earlier today Rose participated in mediation with the officers who arrested her . She met with the pair of officers she was handed to after being pulled from the crowd in the following video around the 6:44-8:04 mark.

One of the most important questions Rose wanted answered was why? Why her? She was 17, smaller than the protesters surrounding her, wearing a knitted hat in the shape of a lion, and as you can see from the video, was presenting no threat. Rose’s question initiated a tactical discussion in which she learned that she was arrested because she was in the “bubble”–the area defined by the supervisor standing behind the line of riot police. Anyone located in the bubble was subject to arrest, having supposedly been notified by the infamous “Ice Cream Truck” bearing the sound apparatus calling out a repeated warning to disperse. Rose stated she doesn’t remember hearing the dispersal warning and was suddenly being pushed forward right in the center of the line of scrimmage, in what was reported by officers as a somewhat tense situation. The police also told her that someone had thrown a water bottle or some small item, and that was what began the series of arrests.

Simply put, Rose was arrested because she was there. She was detained for a short time, and asked a very reasonable question as she was being processed. She asked if she would still be able to attend college and one of the officers stated “this is Portland, this will help you get into college!” She was also told that she was “the nicest Occupier” they had ever arrested.

On that note, we discussed how her view of the political landscape has changed. She stated that prior to Occupy Portland, she wanted to go to college elsewhere, perhaps the east coast. She really had no thought or involvement in local or national politics. Pam stated that Occupy has caused a moment of enlightenment and a growth process in Rose and it is evident that she both supports and loves this awakening in her daughter. It is apparent to me that Rose began to Occupy as a child, and has emerged a more confident, self possessed and empowered young lady with a very bright future.

Through the past months, as Occupy has grown and progressed, Rose has learned that there is a method by which to express her feelings, and that there are solutions to the problems we all face. It has turned her into somewhat of a celebrity in her school, especially with her political science teacher, who looks to her for an opinion whenever Occupy is mentioned. She has gained a fierce sense of community pride and continues to demonstrate a civic consciousness that makes her mother’s eyes light up. Most importantly, she has found her voice and a sense of empowerment that will serve her well as she heads to Portland State University, to perhaps study political science.