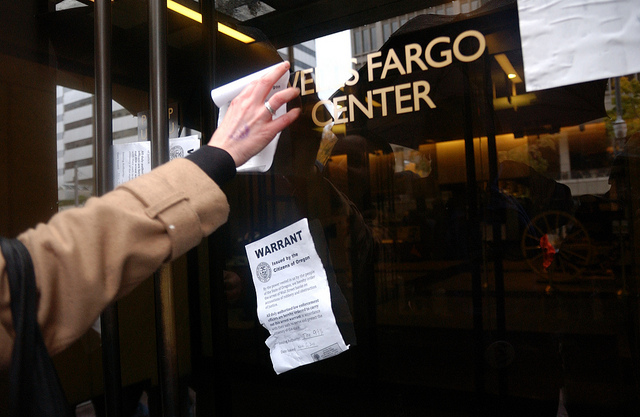 Last Saturday, November 5th, about 300 people marched a circuitous route from Terry Schrunk Plaza to the Northwest Resource Federal Credit Union to open and to support those opening new accounts in celebration of Bank Transfer Day, and in recognition of the absence of interest the larger corporate banks have shown for the economic security of their customers.

The route was circuitous because they detoured a few times to plaster the windows of these banks with citizens’ arrest warrants, charging them with illegal foreclosure, malfeasance, and robbery. Rainwater was used as adhesive. At the Pioneer Square branch of Chase bank, one of the organizers of the march read the warrant aloud, “for those of you just joining us.” After reading the warrant, he began a chant calling for a “citizens’ arrest.” The call and answer of the crowd competed with a man in the square commanding that his listeners join him in Jesus.

The organizers of the march did not obtain a permit and demonstrators kept to the sidewalk. The police were present in their capacity as crossing guards, blocking crosswalks with their bicycles to prohibit jaywalking. A contingent of horseback police clad in riot gear were present at several points in the march. One demonstrator commented that there was no need to be afraid, it was merely an excuse to get the poor animals some exercise.

The march concluded at NW 4th and Everett streets, the location of the Federal Credit Union, whose managers had arranged to keep the location staffed until noon to handle the anticipated influx of customers and provide donuts and coffee for demonstrators. “Whose coffee?” someone called out. “Our coffee!” the crowd responded. “Whose donuts?” “Our donuts!” “Whose money?” “Our money!”

Jim McCarthy, the branch manager, stated that 16 accounts had been opened by the end of the two-hour rally. For perspective, he said, “the 16 accounts represent almost 70% of our average months’ new openings in just two hours.” He continued, “I was very impressed with the organization of the protesters and how passionate they were. The event was orderly and I was very happy Northwest Resource Federal Credit Union could participate. Credit Unions and local community banks are focused on the communities they live in and work to the betterment of local areas.”

According to ABC News, as many as one million people are reported to have transferred their finances to credit unions since September 29th. Rumors of money trouble at an Omaha Wells Fargo have come up, and it is reported that Bank of America has begun charging its customers $10 to close their accounts.

One million is one third of one percent of the population of America, and the trend of movement continues. Remember, every day is Bank Transfer Day. 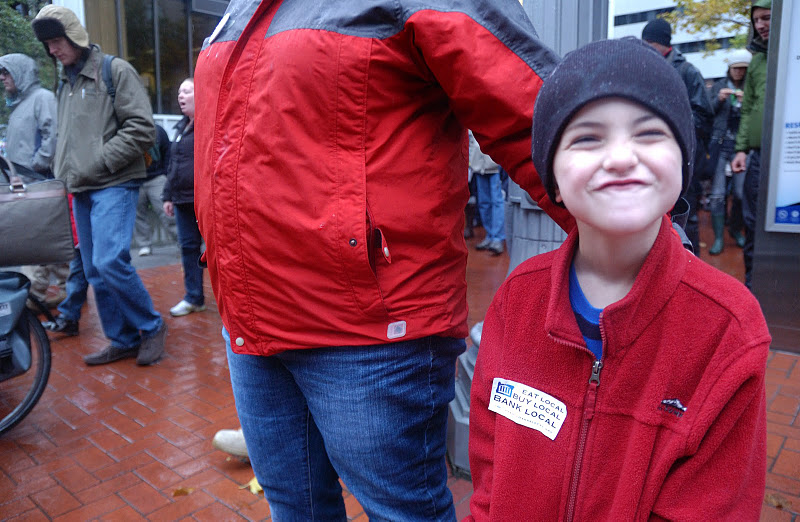