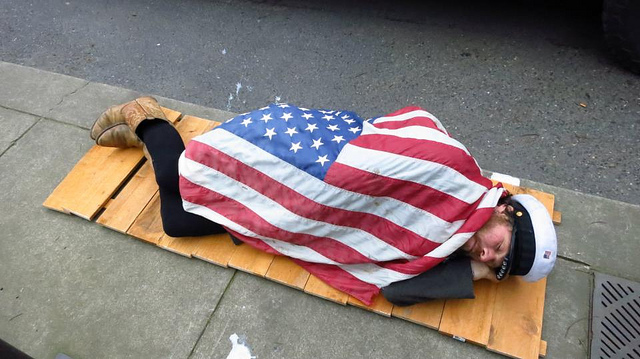 Sleep Activist, “Kernel” Moses Wrosen was found not guilty on two charges Thursday, stemming from his March 2 arrest outside City Hall. Wrosen was sleeping on a wooden platform on the sidewalk in demonstration against the city’s camping ban, when police woke him up and ordered him to move the platform. He did not comply. Remaining motionless and limp, he was unzipped from his sleeping bag, dragged to jail and charged with 2 counts: Interfering with a Peace Officer, and Erecting a Temporary Structure on Public Property without a Permit.

In court on Thursday, Defense Attorney Michael Rose argued before Judge Bushong that “the Kernel” could not be guilty of IPO because Oregon Revised Statute 181.1610 (3b) states that a person who is passively resisting cannot be charged with Interfering with a Peace Officer. The States Attorney called three witnesses, including the officers who arrested Kernel, but offered no evidence that he was doing anything other than passively resisting.

On the charge of Erecting a Structure, Mr. Rose challenged the State to define the word “structure,” as it is used in Oregon statutes and city code. There is no definition of structure within the city ordinance chapter, he argued, so context, original intention, and the legal standard — Webster’s 3rd — must be used to define it. Mr. Rose argued that the State benefits from this lack of definition and can selectively and inconsistently apply the law to include items that should not be considered structures.

Prosecutor Shawn Overstreet struggled to respond to this argument, even as the Judge prompted him with potential examples of objects that the State might consider to be illegal structures such as sleeping bags, boards, pieces of cardboard taped together, or a pair of shoes. Judge Bushong spent a significant amount of time during the prosecution’s argument asking Mr. Overstreet about the State’s definition of the word in order to determine whether the sleeping platform could be considered a structure.  “If I took a small board and leaned it against a tree and put a doll underneath it, is that a structure?”, Judge Bushong asked Mr. Overstreet at one point.

As the trial unfolded the State’s attorney revealed a deep lack of knowledge or understanding of the civil rights movement and civil disobedience. His closing statement was briefly interrupted when the fire alarm went off causing the Courthouse to be evacuated. But Mr. Overstreet wasn’t saved by the bell — when court returned to order he was unable to cite any case law and admitted he knew little about the actions of Martin Luther King and other freedom fighters arrested at segregated lunch counters in the South. Fortunately Mr. Rose and Judge Bushong were patient, taking time to offer a short history lesson to their colleague on why and how an individual or group might choose to break a law they saw as unjust in order to change it. This seemed to confuse the young prosecutor, who continually offered up the argument that the accused could attend civic meetings to change the law, and that his blatant and willful law-breaking deserved punishment.

On the stand, Kernel Moses said:  “I have a moral obligation to challenge this law. I believe that sleep is a fundamental human right, and is essential for mental, physical and emotional health. Human beings spend a third of their lives sleeping. To prohibit sleep, by making it illegal for people to protect themselves and their belongings from the elements, is immoral and amounts to torture.”

In a Columbo-esque closing statement, Defender Rose wove his arguments together challenging the City Council’s intent in using structure ordinances to arrest people arbitrarily, and citing the clear evidence that Kernel was engaged in passive resistance. He wrapped up his arguments by noting that the court would also have a hard time finding Kernel guilty under the protections of the First Amendment.

“The message my client was sending is about safe sleep. The pallet he was sleeping on was integral to that message. The medium of expression is at the core of the message, therefore his right to freedom of expression must be protected under Article 1, Section 8 of the Oregon Constitution,” said Rose.

In spite of the fact that Judges are under the directive to give the State the benefit of the doubt, in the the end, Judge Bushong was convinced by the Defense’s case and found “Kernel” Moses Wrosen not guilty on both counts.

“The court found that the sleeping platform wasn’t a ‘structure,’” said Mr Rose.  “We won acquittal on both ends of a classic civil disobedience lie-in case and a possible inroad on a troubling city policy. This is especially pleasing.”

It remains to be seen whether the outcome of this case will set a precedent for the upcoming Occupy Portland trials that begin September 5 and continue through November. One thing is certain — Kernel’s trial is an important victory for the rights of citizens to express their views on public property, and is a step towards eventually overturning the City of Portland’s unjust anti-sleep ordinances. 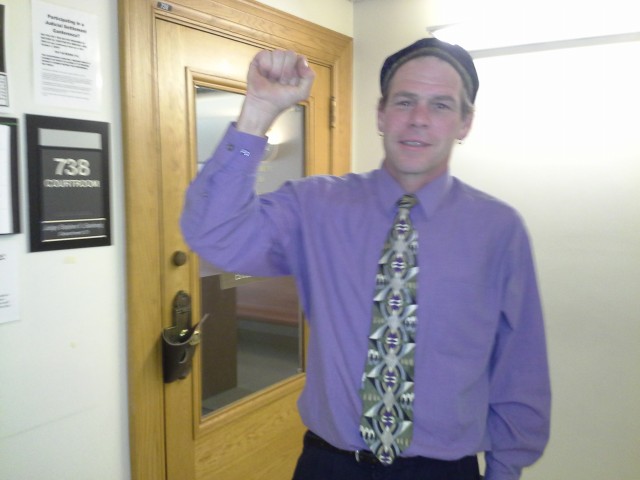