The propaganda machine works. As a person involved in Occupy Portland, I’m battling misinformation, exaggerations, and straw-man arguments dispersed by some of the mainstream media. Like a a stream of toxic waste, this misinformation seeps into the public consciousness. I’m encountering people who claim they initially loved the idea of Occupy, but then it became a disgusting mess of hippies and anarchists bent on fighting with the police and destroying our economy. Where do they get this? 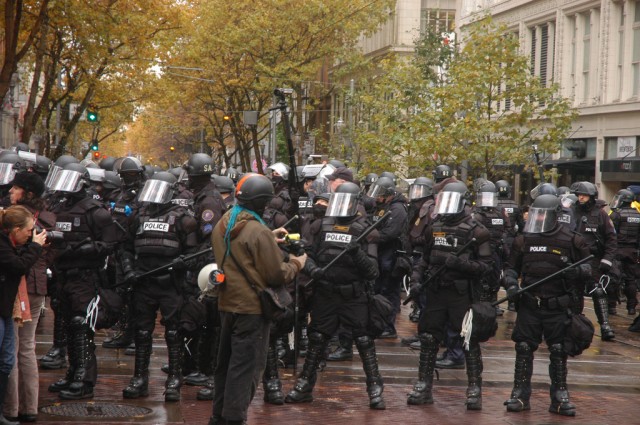 After the Police blocked the Steel Bridge on November 17th (and blamed it on us), I heard complaints that the occupiers are stopping hard-working Americans from getting to their jobs and supporting their families. We just wanted to march across the bridge in an orderly fashion. It was the police that shut the bridge down.

The scary thing about propaganda is that it works. It works really well. In 2008, a Yale political scientist named John Bullock conducted an experiment on peoples’ perception of Supreme Court Chief Justice John Roberts. Volunteers rated their opinion of John Roberts and then were shown a pro-choice political ad that accused Roberts of “supporting violent fringe groups and a convicted clinic bomber.”  Among Democrat study volunteers, their disapproval rating went from 56% to 80% after seeing the video. The volunteers were then informed that the information contained in the political ad was false and asked to reassess their opinion. The disapproval rating fell back to 72% which showed that even though the propaganda was false, it still had a major impact on peoples’ perception.

People involved in the Occupy movement, from New York to right here in Portland, need to remain diligent and keep telling the truth: to each other, to our friends, to our families, and to people who don’t get it. We need to remain committed to non-violence even in the face of police instigation, anti-occupiers trying to start fights with us, and right-wing talk shows. They want us to lose control and start shouting so they can say we’re irrational and dangerous. They want us angry, and we can’t give them what they want.

The propaganda machine has been running since the beginning of time. Even during the American Revolution there were Loyalists who adhered to British propaganda and refused to take the side of the Americans. We are many, we are strong, and together we WILL find a way to take control of the system that has stopped working for 99% of us. We will end the Corporatocracy of our country.

6 comments for “Propaganda Works: But Keep Telling the Truth”