What I Learned During My Time at Occupy Portland

As an outsider that knew nothing about the Occupy Wall Street movement outside of unreliable news media and stories from a friend’s sister’s best friend from college’s post on tumblr (the most reliable of sources), I went to the encampment expecting little more than a crowded mass of tarps and paper-thin tents, stench and filth, and something of a homeless and purposeless hippie gathering simply to get baked and bang on some drums. 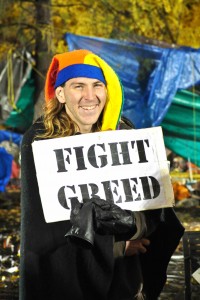 And to some degree, it lived up to its less-than-positive reputation – who knew rain in a park might end up making mud? – but for the most part, I was simply blown away.

I found a community.

What I found was not the breeding ground for disease and illness that some news outlets might have us believe, but rather one thriving mass, one united place of people gathered from every end of the spectrum for a common cause. I found a community. 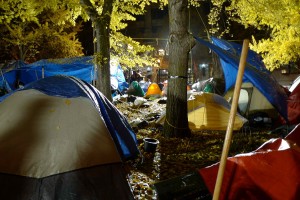 Not just because there were as many tents as physically possible crammed into two tiny parks so that crawling out of one would likely have you crawling into another, but because they were all invariably linked together in an organized and  functional manner. Everyone was assembled in a peaceful and comfortable way, because these were their people, their friends and their family. The phrase “We are the 99%” did not mean simply “We are all people affected by these injustices” but rather “We are one people affected, and we stand together as one.” This was not just a place to address grievances, but a place to find unity in a country that stands divided. For many, it was home.

The homeless problem in the camp was definitely a problem, and the Occupiers acknowledged it as such. But what was important to me, what really stood out and said volumes about the nature of this movement, was that they acknowledged the problem; they didn’t reject it. Rather than turning away those that saw the encampment as a rare opportunity to have a roof (albeit a thin one made of magic rainproof-ish plastic) over their heads for a few nights, they took care of them. They used funds received through donations and other outlets to help shelter these people that had been written off by the rest of society as nothing more than a “problem.” 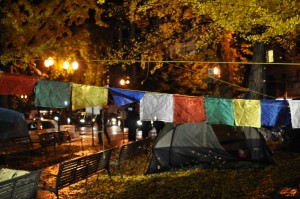 This was a movement comprised of people on the downside of the tense economic state, people struggling as it is, reaching out to help others in equal or greater need. The beauty of such an act is really one that can’t be put into words. Regardless of partisan alignment, religious beliefs, financial stability or lack thereof, people gathered here and looked after each other, took care of people they probably didn’t even know beforehand simply because if they didn’t, then no one else would.

And that, in and of itself, all but defines the Occupy Wall Street movement. I was absolutely blown away.

The lessons that I gained from this brief experience are ones that I am certain will never leave me. I learned so much about Portland as a community, myself as a person, and even the United States at large. It’s strange, to think four short days could open my eyes to things that have long been standing right in front of me, but maybe it takes joining the throngs to realize that you were a part of them all along.

Seven Thousand People Holding Each Other

Samantha and her dad, Kip

When my dad and I arrived at Chapman and Lownsdale parks, it was already midnight, the set time of the eviction. A third or maybe even half of the tents were already gone, but the rest remained unmoved, undisturbed – and unoccupied. The encampment itself was empty, but surrounding it, on the streets and the sidewalks up to the buildings, packed shoulder to shoulder, was an estimated seven thousand protesters. Seven thousand. I’ve been in crowds before, groups of hundreds and even a couple thousand, but standing in the midst of seven thousand people, all dancing and cheering, holding signs or holding each other, united together in the face of hundreds of police armed to the teeth in riot gear – it was difficult for me not to cry.

Occupy Portland called on their city to stand with them and seven thousand answered, gathering from all across the Portland area to Salem and even Seattle, and they did not back down. The police expected to wait out the crowds and move in around 2-4am once the cold and time had thinned the numbers, but come 5am, there were still nearly 3000 people standing strong. No fighting. No violence. Just people people, linking arms and refusing to be scared away. This was an unprecedented level of support, and regardless of the fact that the police eventually succeeded in the eviction around 9am, this was a victory for Occupy Portland, for Portland as a whole. The community showed its true colors, and they were the colors os peace, unity, and love. They wore them proudly, unwavering and absolute in all the ways I one day hope to be.

I’m only nineteen, and I live a fairly comfortable life. I have been blessed in many ways that others have not, and I have my entire life ahead of me to learn of those struggles. But that is precisely why all of this is important to me now. This is a time for me to learn who I am and who I want to be. What values to I want to uphold, and how far am I willing to go to fight for them? I went to the streets of an unfamiliar city in the cold and the rain to stand with strangers of a separate community – and I found home. Not in the bitter Porland weather or the wet and battered streets but in the people that understood where I was coming from and that I understood in return. Their passion and their fervor, their strength in the face of adversity – it gave me strength, made me passionate about a cause I previously did not even fully comprehend. They showed me that our greatest virtue is each other, and it is when we stand together that we become impossible to tear apart.

They can force us out of the parks, they can ziptie our hands and carry us away, but they will never take that power from us.

Along with these beautiful and thrilling revelations, there comes fear.

Around 1:00am on that chilly Sunday morning, the horseback riot-police charged the crowds in an attempt to disperse them, but the protesters refused to move. It was around the same time that I started shaking. I couldn’t tell whether it was the cold finally getting to me, my body begging for sleep, or the inherent sort of terror that comes with “sticking it to the man.” Later that afternoon, when my dad came home from returning to the front lines shaken and sore and his voice gone from screaming, when the reports started flooding in of beatings and injuries, when the whole world seemed to shift on its axis – that’s when I recognized the fear for what it was. Is. Continues to be.

Something Terribly Wrong With This Country

There’s something terribly wrong with this country. It’s not simply injustices and inequality, or the fact that we are owned by the corporations that run this country. It’s apathy. It’s the moment when an officer raises his baton to strike an unarmed peaceful protester. 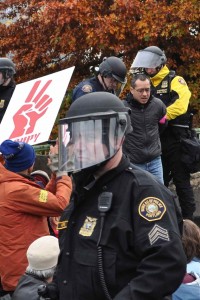 It’s the moment when officials and politicians make excuses and lies to justify these actions. It’s when an ASL translator gets beaten so badly that he ends up in a wheelchair, or when an 84 year old woman gets pepper sprayed in the face, or when a 19 year old college student is watching the news and is wondering if she’s about to see her fellow citizens be killed by the people sworn to protect them – and no one stands up to say “This is wrong.”

Which is why we have to. Whether or not you agree with the Occupy movement, we have to acknowledge that the things going on in this country are not okay, and that we can no longer abide it. This is not about a political movement. This is about compassion. This is about common decency, and common sense. This is about fighting for our people. Our neighbors and our friends, our family, our loved ones. This is our country – not the banks, not the politicians, but ours. And my America is not a country that beats and abuses people and then turns a blind eye. 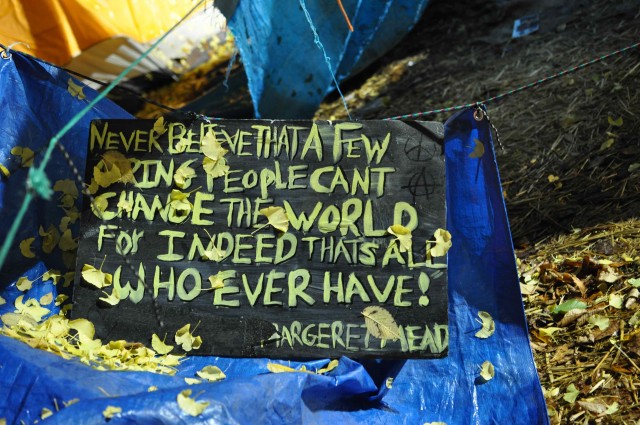 If there’s one thing my dad has taught me, it’s that actions speak louder than words, but when there is no room for action, you use your words to the very last breath. The words that I have decided to use are “I love you.” You, and everyone else in this country, in this world. Because even though I may not know their names, and I may never meet them and I may never know their story, they are my community. They are my neighbors, my friends, and my family. This is my home, and to that end, I will fight until there is nothing left to be said. But for now, I’ll leave you with this.

And I love you.