Story and pictures by K. Kendall 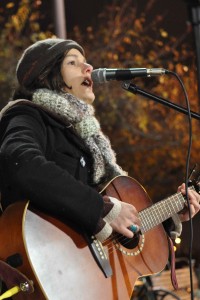 Music has been integral to Occupy since it began, but so far–and maybe this is a function of the diversity of tastes within the movement–we haven’t chosen an “anthem,” and we don’t have songs we sing together. This is probably a function of our time. This is not the hootenanny generation; we’re more likely to be downloading MP3s and listening to iPods than singing around a campfire with an acoustic. But what we do have is a rich variety of singer-songwriters and performers.

Gabe Rola arranged the music for the rally at Salmon Fountain on November 20th that included songs by himself, Fabien, Malcolm Chaddock, and Christina Schull occasionally accompanied by Paul Cone. More pictures of that rally and concert here.

Gabe plans to coordinate a group of Portland-area performers for a local-music benefit compilation.

A NYC benefit compilation called “Occupy This Album” is already in the works, featuring Jackson Brown, Devo, Third Eye Blind, the Guthries, David Crosby, and others. Producers hope to raise one to two million dollars for Occupy by selling digital downloads of the album. 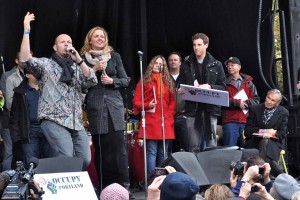 Pink Martini with Storm Large led Portland’s largest concert yet, at Pioneer Square on October 28, where they offered a new version of “This Land Is Your Land.”

According to the Huffington Post, “Music and musicians are woven into the fabric of the Occupy Wall Street protest, much as they were in movements, confrontations and protests of the past, from the American Revolution to slavery to the Civil War, suffrage movement, labor movement, civil rights movement and Vietnam War. But no defining anthem such as “We Shall Overcome” or “Which Side Are You On” has yet emerged for the protesters who have taken on corporate America.”

Pete Seeger, at OWS, led the crowd in singing “This Little Light of Mine,” and the same song surfaced at Portland’s two vigils. The first local vigil was led by a group of ministers on November 12/13, who also led the singing of “We Shall Overcome.” At the second vigil,  a week later, Rabbi Ariel Stone led the singing of “This Little Light,” and one Occupier started a round of “Lean on Me.”

Plenty of songs have been offered as possible theme songs, including some by The Who, U2, and Tom Morello. These and more are posted on nine pages at the end of the Huffington Post article.

For a movement that’s not even two months old, we have plenty of candidates for “our song.” The one that will catch on probably hasn’t been written yet.

San Diego-based Ricardo Beas sent us this one from his label Cafe Peyote, which seems to suit Black Friday especially well: