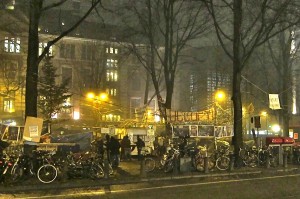 I learned about Sacco and Vanzetti when I was in high school, and since then I’ve been trying to figure out what an anarchist is. It’s been more of a sidebar for me than a main story. Political science bored me; I was into art and literature and found poly-sci wonky. But because some of the coolest people I’ve met called themselves anarchists, sporadically I have tried (and until now, failed) to get a handle on what anarchy means. For some it appears to be a fashion statement; for others, it means they spray-paint the walls of buildings and commit other minor misdemeanors as an expression of rebellion; and for a few, it’s a complicated philosophy that involves reading long and difficult books. I fell asleep over them. Whatever it is, it doesn’t lend itself to slick general definitions and short soundbites. 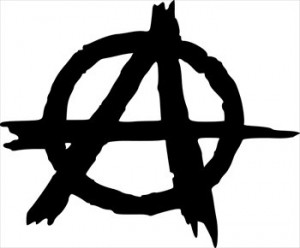 Journalists, cops, and conservative parents use the label “anarchist” to demonize anybody that doesn’t wear button-down shirts and chinos or dream of going to Yale. Take this news report  published yesterday, in which Kyle Iboshi says the Police thought the “anarchists” were from Occupy Portland, and then we hear a police officer saying, “The sad thing is that they [the supposed anarchists] are trying to associate themselves with the Occupy Movement, which, for the most part has been peaceful.” Sometimes Kyle Iboshi fails to listen to his own footage. But he and the officer were on point about one thing: these were “anarchists.”

What did Iboshi and the police officer mean? Why the demonization of anarchy? I went to bed grumbling, and then voila! In this morning’s email I found a brilliant explanation of anarchism written by one of our most eloquent non-leaders, David Graeber, who is an American currently teaching in London, writing in Al Jazeera. It’s a long article but worth the effort. Just the sub-heads are enough to make anarchism clearer to me than it has been till now.

Finally, as the article wraps up, Graeber offers some stirring words on Democracy.

His final paragraphs are quite possibly prophetic:

I recommend reading the whole article as a kind of Cliff Notes version of the meaning of anarchy. Pretty soon Adam Rothstein, who started the Occupier and is an anarchist himself, will be back and can speak about it far more eloquently than I.

On a related subject, here’s another glint of international perspective: in the first three minutes of this interview, Alejandro Jodorowsky, the wild man who gave a generation of stoned hippies their favorite cult movie, El Topo, talks about the necessity for the Occupy movement to be about more than the redistribution of wealth. At the time he gave this interview, he hadn’t visited Zuccotti Park. I know that if he got there, he saw that it was exactly what he was asking for: “the soul…the heart…how we will change the world.” (Watch the whole thing if you’d like to hear him talk sparklingly about the Tarot, mysticism for Marxists, and what gives him erections. I think the man’s a genius, and I’ve watched El Topo at least a dozen times.)

If Occupy were just about the redistribution of wealth, I couldn’t be bothered about it, myself. For me, it’s not about bailouts, not about foreclosures, not about health insurance–though all those issues matter and are related. For me, it is the energy of a new consciousness–a consciousness of compassion and possibility, a consciousness that goes beyond all the failed systems we now know, including endless war; the lobbied, corrupt, and ruined two-party system; unbridled greed; and institutionalized racism. This is a social movement, a political movement, a spiritual movement; it’s a shift in the paradigm. It’s a consciousness, and following Graeber’s four points, an anarchist consciousness, a Buddhist consciousness, a nonviolent radical shift of how we view the world and ourselves–that grips my heart. I have to do more homework before I know if Anarchist is a label I can honestly apply to myself. I’m not sure what it means to walk that talk. Must I stop voting? Must I move into a squat? I have a lot more to learn, but I’m open to claiming the Anarchist label after reading this article by Graeber. 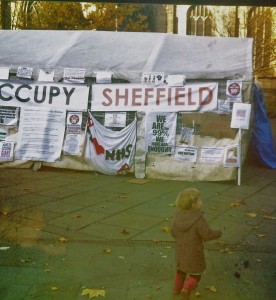 6 comments for “Anarchism and a global perspective on Occupy”