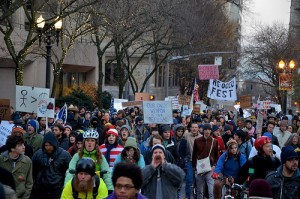 After being evicted from the two city parks held for nearly six weeks back in early November, Occupy Portland set out this Saturday with a goal of re-occupying another city park. And in the process, Portland showcased once again why it remains one of the more dynamic Occupy sites in the country.

Given notice of the movement’s intentions, Portland Mayor Sam Adams, a “liberal” Democrat, warned on Friday that the city would not tolerate another occupation because “we simply cannot afford another encampment in our city.” (The city’s Parks Department claims that park “restoration” due to the first occupation will cost $85,000, though many of the itemized charges were for annual expenditures and other pre-existing park conditions.) In his statement, the mayor also continued to espouse his empathy “with the founding frustrations of the Occupy movement,” but made it clear that he wouldn’t hesitate to send in the city’s militarized police force as a token of this professed “empathy.”

The mayor’s antagonisms and near freezing temperatures notwithstanding, a crowd around a thousand strong still gathered Saturday afternoon and set out for a march through the city’s downtown, self-policing themselves as they spilled out onto the streets. The march ended at the previously undisclosed re-occupy location, Shemanski Park, located in the northern end of the city’s South Park Blocks, about an hour later. Upon arrival, tents were set up and coffee was served: Occupy Portland had its new home. 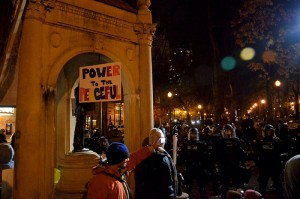 By 8:30 p.m., however, riot police had arrived and began broadcasting a notice that the park was closing a half hour early due to an emergency decree, leaving all who remained to face arrest. I asked an officer just why the emergency decree had been declared, but unsure himself, he merely reiterated that I faced arrest if I stayed. Soon after, the police line moved on the remaining protesters, who, numbering a few hundred, began to chant: “Show me what a police state looks like! This is what a police state looks like!” The advancing police then began to readily thrust their billy clubs into protesters’ chests, while others chose to take aim at protesters’ heads and necks. 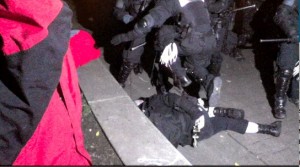 Once the police line had advanced nearly halfway through the park, the police, unprovoked, charged at the slowly retreating protesters, swinging and thrusting their batons with a level of indiscriminate violence nearing that of a cop riot. Making a hasty retreat, I could see one protester chased by a lone officer—baton poised overhead ready to strike—for nearly 30 yards before the officer tackled the man to the ground. A group of protesters was able to quickly pull the man away before a swarm of riot cops could arrive to apprehend him.

In all, the fleeting police melee saw numerous minor injuries in addition to more severe injuries as well, with at least one protester taken away in an ambulance. Nineteen protesters were also arrested as the police cleared the park, all charged with criminal trespass in the second degree and interfering with a police officer. And with numbers dwindling, and facing raging cops, the park was cleared relatively fast. 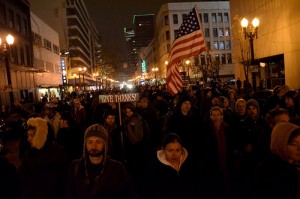 Pushed out of the park and onto the adjacent streets, the remaining protesters slowly began to reassemble and began a spontaneous march on city hall. After a brief regrouping at city hall, the re-energized protesters decided to once again take to the streets.

The impromptu march continued for the next hour, winding through the city and clogging Saturday night traffic in process. And as the march progressed, the numbers continued to grow as more Portlanders joined in, swelling the crowd to once again near a thousand. The defiant and militant atmosphere also remained rather festive. Dance remixes and other music from Green Day’s “Boulevard of Broken Dreams,” to War’s “Low Rider” was blared by a set of speakers mounted on an accompanying bike. At least one temporary stop was made for street dancing. All this left the incessant warnings broadcast to vacate the streets by the trailing police easily drowned out and hardly audible.

The scene created a rather stark juxtaposition for the countless onlookers emerging from the city’s bars, clubs, and restaurants. For all the marching and dancing protesters eliciting cheers from many of the onlookers were pursued up and down the city’s streets by armored police vehicles, adorned with the very same cops that had nearly rioted against the peaceful protesters mere hours earlier. The city and police fear campaign reverberating throughout the local media echo chamber about Occupy violence was exposed to a wide swath of the city to be a mere mockery.

Eventually, the improvised march wound its way back to the South Park Blocks and back to Shemanski Park, two hours after its official closing time and the earlier violent ouster. And as the emptied park came into view to the marchers, they impulsively broke into a sprint as they shouted, “Take the park!” With music still provided, dancing soon resumed within the reclaimed park to Michael Jackson’s “Thriller.” Word soon spread that the police had given up their chase and retreated; the mayor rather belatedly realizing that he’d rather have protesters peaceably assembled in a park, than overtaking the streets of downtown. 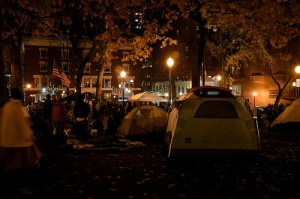 After over an hour of cat and mouse, Occupy Portland had prevailed in its bid to reoccupy a city park. The police, it was clear, had been outwitted in front of the entire city. All that was left for them was to slink away into the night, their truncheons and pepper spray in tow. And as I write now Sunday afternoon, the park remains occupied.

The tactical victory of Occupy Portland over the police this weekend is sure to inject added energy and life into the movement that the local media had just recently begun to write off. It also serves as a viable lesson on outmaneuvering the police, which will undoubtedly be of worth in the coming weeks as Occupy Portland, along with thirteen other western Occupy movements, seeks to take up the call of Occupy Oakland to shut down all west coast ports on the 12th of this month. Although even if this ambitious direct action is to fall short in Portland, this weekend demonstrated that Occupy Portland continues to evolve, and is becoming increasingly more flexible and mobile in the process. Moving forward, just how best to use this dynamism in the coming weeks and months appears to be the most significant issue facing the rejuvenated movement at the present.

– Ben Schreiner is a freelance writer living in Salem, Oregon. He may be reached at: mnschreinerATgmail.com

2 comments for “Occupy Portland’s Street Smarts: A Tale of Re-Occupation”