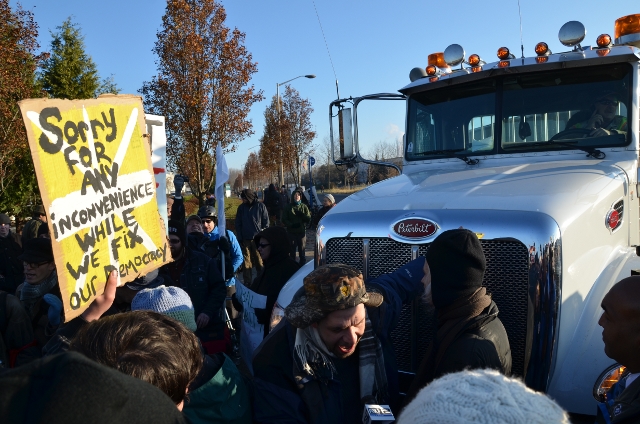 "Sorry for any inconvenience while we fix our economy" By: Lauriel

The global revolution continues today as Occupations across the the world coordinate efforts to clog a vein of the 1%, if even a day. In Portland, several weeks of organization and three meetings with attendance hovering around one hundred planners led up to today’s actions. While the mainstream media tried to pin Occupy protesters against the Unions, all along, protesters knew that rank-and-file unions members stood in solidarity. Statements like this one from Craig Merrilees, the ILWU communications director were touted by the mainstream media to discredit the action.

“This is being promoted by a group of people who apparently think they can call general strikes and workplace shutdowns without talking to workers and without involving the unions.”

Anyone with a basic understanding of how Unions currently operate knows that to maintain their contracts, statements like these are issued in order to avoid conflict. Years of US policies crafted behind doors by ALEC and others have drained much vitality from Unions across the country.

“[The lack of support from the ILWU] sheds light on the fact that our unions have been hamstrung and made ineffective by laws designed to curtail workers organising for their rights to better pay and conditions in this country.”

So without officially coming out, unions across the US were organizing for December 12th.

A constant concern from general public that listened to the daily news on TV asked repeatedly, “What is the point of affecting union and other workers pay and livelihood when there is a publicly communicated 10 per cent unemployment rate and a real unemployment rate of 16 per cent in the metro area? On days like this port shutdown, you are missing the real point – jobs”. And there’s really only one way to answer that question, “that this is one day of showing unity versus everyday of feeling that all of us, alone, are being taken advantage of”. 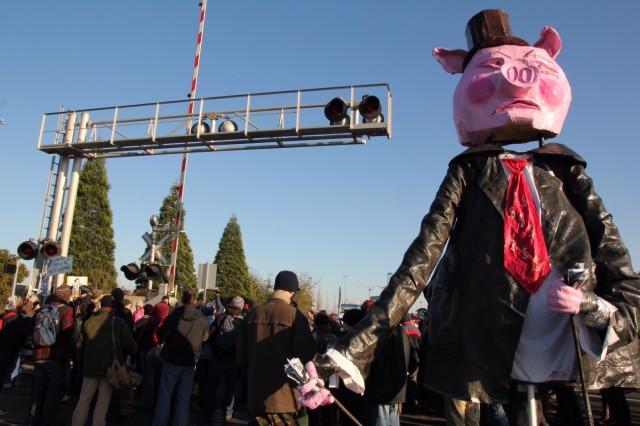 The Capitalist Pig - Photo by Justin

In Portland, protesters took on several different avenues to show their support. Some brought giant capitalist pig puppets that greedily shoved money into their mouths. Some brought sound systems to keep the crowds warm and lively. And some put their safety on the line to prove that what’s happening here and around the world is absolutely wrong and must stop.

Three of these protesters are Shawna, Eddie, and Lara. They laid their bodies down on the cold metal tracks that see millions of pounds of goods roll over them every day. They successfully diverted one train, which upon hearing of the protesters, reversed and was taken off course. A truck was also successfully stopped from crossing the tracks. But then, a front-loader operator from Millbank Material USA decided to take matters into his own hands and rolled up to the protesters in his gigantic beast of a truck. Police watched and reported on the scanner that the loader was rolling towards the protesters. They stepped aside to let him through. He lowered the bucket down, inches away from crushing the protesters’ skulls and legs. Another worker cheered the driver on from the background, “Run the motherf***ers over!”  The protesters remained steadfast in their resistance. They were not going to move.

Upon witnessing this, a larger group of protesters ran over to to driver and screamed at him to stop, which he did.

Police monitering the scene reported on the radio that they spoke with the operator and that he claimed that his bucket was broken. Another police officer replied that he’d seen him operating it a little earlier with no problems.

The manager of Millbank Material USA forced the operator to come out and apologize. The conversation that followed is paraphrased below.

Operator: “I’m just really frustrated that you wouldn’t move for our trucks. We’re just trying to get our jobs done.”

Protester: “I’m sorry that you’re trying to do your job but safety is part of your job – that was not safe. You can’t pretend you have no idea what is happening.” 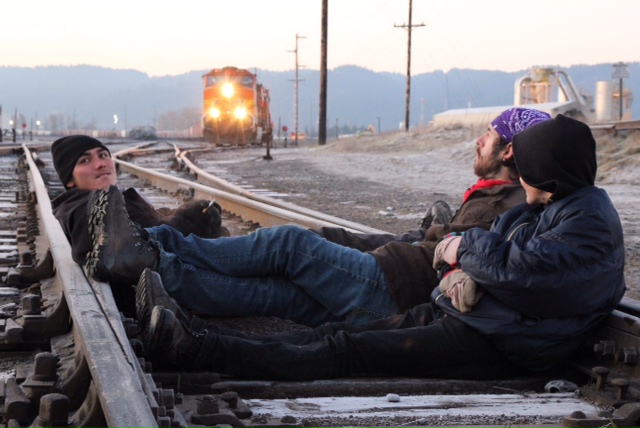 We Will Not Be Intimidated By: Justin

When asked why Shawna was willing to risk her life, her reply was,

“I came into this movement knowing that I may lose my friends, my family, my reputation. I have a child. what I do today won’t have an affect on me today, but it will have affect on his future. When he’s my age, he won’t be struggling to get nowhere. If that takes laying down on a track, risking getting crushed by a frontloader, then it’s worth it.”

The disconnect that some everyday workers have to the systemic problems around this world is disturbing. Occupiers do not want to wait for the day that each of these workers suffers some egregious harm to have them join the movement. All workers should recognize that, just like the ILWU’s motto, “An injury to one is an injury to all.” The world is waking up to the fact that an injustice to one is an injustice to all.

1 comment for “D12: Occupying in the Land of Ports”