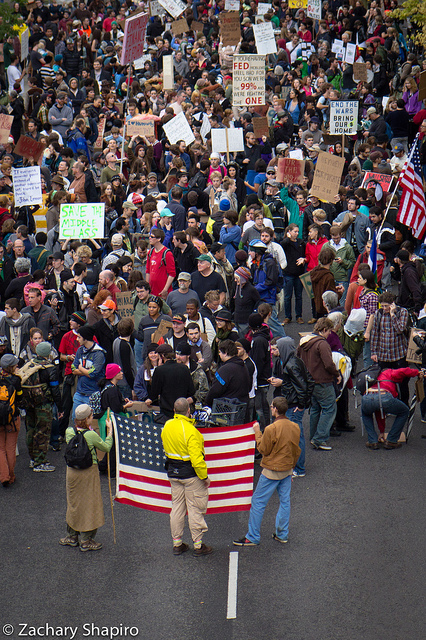 I joined the United States Marine Corps at the age of seventeen. Like many other disenfranchised American youth, I found the promise of a university education, in addition to full health and dental coverage, appealing enough to make the decision to join. I promptly joined in March of 2oo1 and left for recruit training in April of that year. After three months of brutal training in the Southern California sun I earned the coveted title of United States Marine. I remember being deeply troubled on the day of graduation. The other freshly minted Marines joked around and couldnt wait to go to the School of Infantry but I was disturbed. In three months I had transformed from a low class portland kid with no opportunities to a young Marine stationed in San Diego. It didnt feel right. I didnt want to go into combat. I didnt want to kill anyone or have anyone kill me. I just wanted a decent job and the chance to go to school. Some of the other Marines felt the same way and I remember talking with one of them about it briefly. It’s been a decade so I dont remember the exact details of the conversation but it basically ended with us feeling good that the last major war the Marines had fought in was ’91 in Iraq and Kuwait and it was primarily an air war. With any luck we’d do our four years get out, go to school, and make big money in the “real world.”

The real world had other plans.

I was at Camp Lejeune, N.C. on the morning of September 11th 2001. In fact I had walked into the recreation center just in time to see the second plane hit the world trade center on the big screen tv. At first I thought it was a new blockbuster movie. I asked one of the Marines sitting on the couch what movie it was and I’ll never forget what he said. “That aint no fuckin movie man, we’re going to war.”

My heart sank, I was confused, I spent the rest of the day wondering who had committed the terrorist act. I wondered which nation i’d be sent to and I wondered how long i’d be there.
It wasnt long before the nation fell in love with war porn (what we call non stop images of war on the news.) Everybody had an american flag or a yellow ribbon posted on everything. All of a sudden we were a nation again. United by fear and hatred. I wasnt a radical at this point but I definitly became disgusted with false patriotism and war fanatics. It seemed like I couldnt get away from any of it. I was surounded by the false bravado of war hungry Marines. I was surrounded by a nation that wanted blood. It made me sick. I never spoke out against the war during my first enlistment because I was afraid of being labeled. Looking back I realize that speaking out would have been the bravest thing I could have done. Now when I meet the people who resisted the war on terror in those early years I make it a point to thank them for standing up and speaking their minds when nobody else would.

Afghanistan wasnt enough. When the, war criminal, Bush II called for an invasion of Iraq I became angry. Thats when I began voicing my opinions to a minor extent. I could see no correlation between Iraq and Afghanistan. However, when my unit began training for a war against Iraq I becamed brainwashed with their rhetoric. It was hard not to. The military showed us exactly what a monster Saddam was. They showed us movies of terrible war crimes he had committed against the Iranians and his own people. They showed us pictures of corpses and they told us that we were liberating Iraq for the safety of the United States and more importantly Iraqi citizens. They also showed us pictures of his missile arsenal that he had pointed against our middle eastern allies Saudi Arabia, Israel, and Kuwait.

I became a believer in the war. I deployed to Iraq four times between 2003 and 2008. I fought in every period of the war. The invasion, the post invasion, the surge, and the beginning of the withdrawl in late 2008. I spent most of those deployments in the western Al Anbar province of Iraq. I’d seen action in all the major places. Fallujah, Ar Ramadi, Baghdad, Umm Qasr, Nasiriyah and many smaller ones such as Dulab, Saqlawiyah, and Hit to name a few. I’d traveled through the major US Bases such as Balad, Liberty, TQ, Al Asad, Al-Qa’im not to mention all the bases in Kuwait where we staged and trained.

It was 2007 when I began to seriously question the war. At that time I was a platoon sergeant in charge of fifty-eight Marines. Part of our mission was to escort KBR trucks to our various combat outposts. KBR used armored semi-trucks to transport large amounts of gear for us and we would provide security for them using machine guns and humvees. Being the platoon sergeant I would sit in meetings with KBR employees and our battalion operations office and work out transportation details. Thats when I first realized the staggering cost of the war. Contracting is not cheap. After doing a little research I found that KBR was a subsidiary of Halliburton. The War criminal Vice President Dick Cheney had been the CEO of Halliburton from 1995-2000 and had received a $36 million dollar severance bonus for his services. When plans for the Iraq war became solidified Halliburton recieved a $7 billion dollar contract for the war. A contract which was odd because only Halliburton was allowed to bid for it. While I was used to being around the military industrial complex this was the first time I was seeing the politicians getting kickbacks and it disgusted me. I began to research other corporations that the government contracted with. These are a few of those corporations that I found. Below is a list of who they are and what they were contracted for.

*Triple Canopy: One of a handful of Security companies who shared in a $1 billion dollar state department contract. Triple Canopy was also notoriously aggressive towards Iraqis.

In addition to the above contracts I found out who financed the war and the more I studied the more frustrated I became. I questioned the deaths of my friends and enemies. I began to sympathize with the insurgents and freedom fighters. I hated going on patrols, I hated standing at checkpoints and monitoring citizen activity. I would say that I felt like a nazi except at least the nazi’s knew what they were fighting for. I felt like a cheap mall cop. Like a private security guard who blindly obeyed procedure. I was a hired goon and I knew it.

The contracts opened my eyes. War is business. A fellow Marine who shared the same sentiment gave me a copy of Major General Smedley Butlers “War is a Racket.” It was the book that opened my eyes to the reality of war. Smedley Butler was a two time Medal of Honor recipient. No one could accuse of him of cowardice. He had fought on three continents and when he retired he spent the rest of his life speaking out against war. I still feel a strong connection with this warrior. Unfortunatly it seems as if we both had to learn the hard way. Below is my favorite quote from the good General.

“I spent 33 years and four months in active military service and during that period I spent most of my time as a high class muscle man for Big Business, for Wall Street and the bankers. In short, I was a racketeer, a gangster for capitalism. I helped make Mexico and especially Tampico safe for American oil interests in 1914. I helped make Haiti and Cuba a decent place for the National City Bank boys to collect revenues in. I helped in the raping of half a dozen Central American republics for the benefit of Wall Street. I helped purify Nicaragua for the International Banking House of Brown Brothers in 1902-1912. I brought light to the Dominican Republic for the American sugar interests in 1916. I helped make Honduras right for the American fruit companies in 1903. In China in 1927 I helped see to it that Standard Oil went on its way unmolested. Looking back on it, I might have given Al Capone a few hints. The best he could do was to operate his racket in three districts. I operated on three continents.” – Marine Major General Smedley Butler

I left the US Marine Corps with an Honorable discharge in 2009. Although I was anti-war I still missed the military and in 2010 joined the US Army Reserve as a Reserve Psychological Operations Soldier. It only took me a few drills before I realized that the entire military structure is built around serving the interests of big business. Disgusted with the Reserve I sent my Commanding Officer a Letter refusing service as a soldier. In return the Army has sent letters threatening to take away benefits they never gave me. They have tried using fear to bring me back in line. Its not going to work. Truth always trumps fear.

Since late 2010 I have spoken out against both the War and the US Military. I am a member of IVAW (Iraq Veterans Against War) and War Resisters League. I also specialize in anti-recruiting. If you know anybody in the Portland Metro area who is thinking of joining the military I am available to meet with them and their military recruiters to discuss what the military is, who it works for and what it accomplishes. Beyond just being a Veteran I am also an anarchist/bioregionalist so when I talk with people who want to join the military I usually provide them with anticapitalist insights on the marriage of business and government, and the how the military is used to aggressively protect those corporate interests.

3 comments for “War on Terror: A Radical Veterans Story”