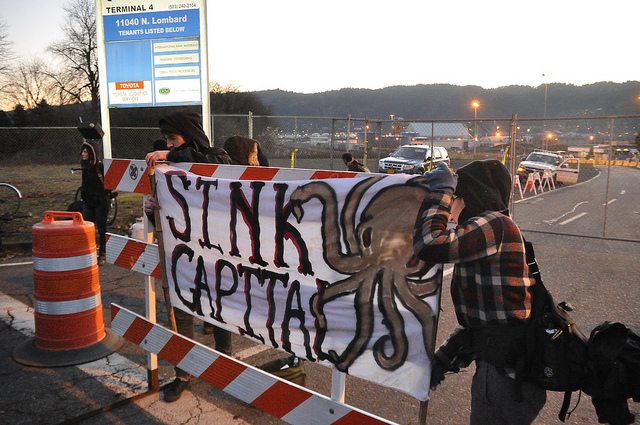 The media loves the word “anarchist”. To them, anarchist means a group of people all wearing black who break things. It makes for great media coverage. Sometimes they’re right, but most of the time they’re wrong. Here is a simple writing that will attempt to explain what the Anarchist believes about the current state. I am going to briefly address Anarchist beliefs on property, the state, and two basic functions of the state: the military and the police. We should begin with property because it is the concept of property upon which the modern state is built.

Anarchists do not believe that the earth or any part of the earth can be owned. Simply put, we do not believe in sole property ownership. When an individual or group of people looks at a piece of land and declares that land to be theirs, they institute what is commonly called property. They take a large portion of land and divide it among themselves. In order to secure the land for themselves they must create a form of order. They do this by creating three forms of order: the state, the military, and the police. The role of the state is to govern all land within the predetermined boundaries and through manipulative diplomacy have relations with other power groups who own land around them. The role of the military is to defend the borders of the property and to add additional property through militant force. And, the role of the police is to create internal order.

One only needs to look at early U.S. history to see exactly how this works. Colonists landed on the eastern shores of the continental United States. They immediately took the land as their own, formed colonies and put up defenses. They raised a militia to deal with both internal and external dissent. When they wished to expand, they simply took by militant force all land that they could defend. When the English King, George III, levied taxes against them, the wealthiest land owners traveled from the thirteen English colonies to Philadelphia where they drafted The Declaration of Independence. It is interesting to note that the first sentence of the Declaration declares the following:

When in the Course of human events it becomes necessary for one people to dissolve the political bands which have connected them with another and to assume among the powers of the earth, the separate and equal station to which the Laws of Nature and of Nature’s God entitle them, a decent respect to the opinions of mankind requires that they should declare the causes which impel them to the separation.

Already in this first sentence we see that these wealthy land owners believe that there is a difference between the Laws of Nature and Nature’s God! The signers of this declaration believe that they have Gods mandate to rule over nature! This is exactly the problem. What God? Who rules nature? Even in today’s advanced scientific age there is absolute no evidence that there is any sort of creator who rules over nature.

The rest of the declaration is an all-out lie. The founders of the United States did not consider all men to be equal. They in fact participated in one of the most barbaric forms of slave trade in world history. They did not view Indigenous peoples as people but rather as savages who lived on property that “rightfully belonged” to the United States. This is exactly what led to the Indian Wars that lasted for well over a hundred years. I would even argue that US is still fighting the Indian wars because they still refuse to honor treaties between the federal/state/county governments and the indigenous people.

So how does the Anarchist view property? The anarchist views property for what it is. A mere social construct that comes from the following: 1) It is an inherently religious view that man should dominate the earth. 2) It is form of ownership that allows a minority to create a space for themselves in which they can profit from natural resources. 3) It is a space in which a minority can control large populations through either militant force, legislation, or a mixture of the two.

The concept of property leads to a belief in state. When multiple individuals own property next to each other they need to form a way of defending that property. It would be far too expensive for each property owner to provide a militia for each property. So they band together and form a State. It becomes the State’s responsibility to provide an internal defense commonly known as the police and an external defense commonly known as either a militia or a military. The State is also responsible for legislation and a judiciary. It is interesting to note that in the US from 1790-1850 only white-male adult property owners could vote. This is because the state exists to protect property! The state is not concerned with people. It is concerned with property owners. We see this even in Portland today with the Portland Business Alliance. The PBA is able to control the city because they are the “most invested” in how Portland is run. One interesting aspect of property ownership is business ownership. Not all business owners are property owners. As the property owners rent out their land to business, business owners want a vote as well. In 1850, the US allowed all legal business owners “the right” to vote by allowing all white-males to vote. When African-Americans started owning business they too “earned” the right to vote in 1870. In 1920, women “earned” the right to vote. In 1924, Native-Americans were granted US Citizenship (which really means that the United States could now call indigenous people terrorists instead of respecting their treaties.)

By the time African-Americans, Native-Americans and women were granted the right to vote the State had already invalidated voting through Corporate control. Remember those early land owners? Well in the 1800‘s they used the state to build banks, railroads, mines, media monopolies, and utilities. They didn’t need to vote. They bought political offices, military generals, police chiefs, judges, justices, and religious leaders. Voting didn’t matter anymore. Even Abraham Lincoln realized this was true. In a letter to Col. William F. Elkins he stated the following:

I see in the near future a crisis approaching that unnerves me and causes me to tremble for the safety of my country […] corporations have been enthroned and an era of corruption in high places will follow, and the money power of the country will endeavor to prolong its reign by working upon the prejudices of the people until all wealth is aggregated in a few hands and the Republic is destroyed.

So how does the anarchist view the State? The Anarchist views the state for what it is. The State is a social contract between property owners. The State exists to serve the few land/corporate business owners. Through legislation it allows the owners to create massive corporations which generate wealth from natural resources. The State also builds and maintains an active military in order to push either its physical or economical boundaries through violence or intimidation. The State is responsible for providing a police force which enforces all laws within the defined boundaries of the state. The State is responsible for providing a legal system in order to suppress dissent and to maintain order within the boundaries of its borders.

As states are formed by property owners there arises a need for a common defense. This usually starts in the form of a militia. In the United States The Militia act of 1792 was the defining act which allowed Property Owners to form militias that would be placed under control of the US President:

Whenever the United States shall be invaded, or be in imminent danger of invasion from any foreign nation or Indian tribe… [or] whenever the laws of the United States shall be opposed or the execution thereof obstructed, in any state, by combinations too powerful to be suppressed by the ordinary course of judicial proceedings, or by the powers vested in the Marshals by this act….

Not just anybody was a part of the militia. The militia was to be conscripted with only white-males.

That each and every free able-bodied white-male citizen of the respective States, resident therein, who is or shall be of age of eighteen years, and under the age of forty-five years (except as is herein after excepted) shall severally and respectively be enrolled in the militia, by the Captain or Commanding Officer of the company, within whose bounds such citizen shall reside.

The American State has also fought in hundreds of conflicts, all to maintain political dominance in certain regions, with a conflict for nearly every year of its history.

So how do anarchists view the military? The military is an arm of the state used to defend the state and to expand the state through violent force. States must have a military if they wish to expand either the land they own or if they want to increase economic pressure on on other states or unregulated areas.

As states are formed it becomes necessary for the Property Owners to protect what they believe to be theirs. In order to do this they use the the state to create a police force. The oldest law enforcement agency in the United States is the United States Marshals Service (USMS). The USMS was created by the judiciary act of 1789 with the purpose of executing “all lawful precepts directed to him, and issued under the authority of the United States.” The United States also created the US Parks Police in 1791 to protect all government lands and the US Mint Police to protect the treasury. Take notice that none of the original police services of the United States were designed to protect the people. They were designed to hunt and capture enemies of the United States (US Marshals), to protect government offices and lands (US Park Police), and to protect financial institutions (US Mint Police). These are the real roles of Police officers! With exception of Philadelphia, county and city police were formed later and have been used to enforce the same three principles above but at a local level. Here is a list of all the Federal Police Agencies (currently, ninety-seven of them).

I have briefly covered concepts on property, the state, and the roles of the military and police within the state. I will be writing more articles discussing anarchist philosophy as it pertains to the modern state today. If you have any questions about anarchism, please send me an email.

3 comments for “Perspectives of an Anarchist”