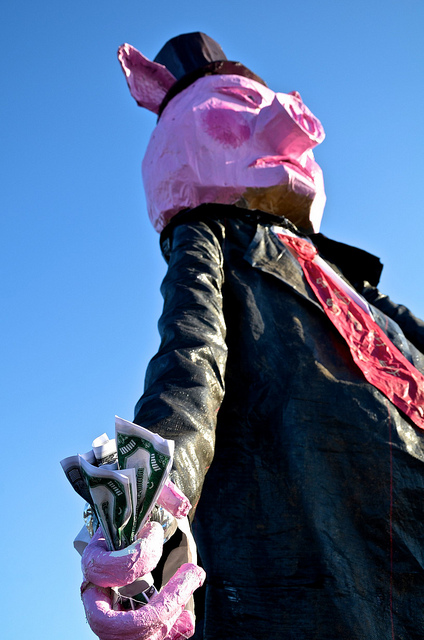 You don’t need to be wealthy to be elitist. In fact, you don’t even need two nickels to rub together. The 99% are just as prone to elitism as the 1%. Despite the wide economic chasm separating us, we’re all still endowed with the same psychological building blocks.

What does every bullied child wish for? They want to beat up the bully. No matter how repulsive and hated a bully may be, his bullying still communicates power and control to their victim, and that power is an attractive trait. The allure of that power is directly equivalent to the pain caused. The worse the bully is, the more the victim secretly wants to be him. Of course the victim always thinks that they would be more just and equitable in their display of power, because we all believe that we are good people, despite how we act. Judging people based on their behavior is reserved for others, never applied to ourselves.

During the course of adolescence, the bullies of primary school are exchanged for the “popular” crowd at middle school. Then in High school, we want to be the quarterback, the head cheerleader, or the frat boy. Or, if we just don’t stand a chance of success in that elite group, we shave our heads, drop acid, and start listening to punk, complaining about the “sheep” that just want to fit in. We pick a genre of music to listen to entirely because of the crowd of people that of music will endear us to. We dress so that we can be accepted by some clique, and we form social spheres and sub-cultures so that we can pursue a concept of elitism that is attainable to us. We dress in red and fire assault rifles at those that dress in blue.

Then we become adults and we’re thrown out into a capitalist world. We are all forced into gladiatorial economic competition with each other in which the winner gets the spoils and the loser gets a Section 8 trailer, a litter of illegitimate children whose names we are dimly aware of, and a few hundred in food stamps per month. We are required to struggle and compete against one another in order to become the bully, but we’re intrinsically a social creature, not a financial creature. Success financially is only attainable by a very few. Despite our efforts and planning, time and chance overtakes us all. However, we live in our own social spheres that we subconsciously believe we can be successful in, spheres that we take as seriously as any captain of industry takes his board of directors. In other words, we chase an ideal as embodied by persons that we esteem, then we make that idea into our golden calf, and perceptually marginalize the rest of the world because they don’t worship it too. This is, in essence, elitism. The only difference between the elitism of the poor and the rich is that the elitism of the rich pays better.

Elitism: Advocacy of or reliance on the leadership and dominance of an élite (in a society, or in any body or class of persons.)
–Oxford’s English Dictionary 2nd Ed.

Just like the victimized child on a playground wants to be the bully, the victimized adult in the Capitalist arena of combat wants to possess the social power of the wealthy elite, so we recreate our own social arenas with some ideal that we control as the gateway to elitism. Elitism is an abstract concept embraced by a group of people, not persons in themselves per se. Elitism is the vanguard of an idea peculiar to that particular group. Persons, in so far as they are regarded as the elite, are only considered as such because of their perceived embodiment of the elite idea.

Elitism is dependent upon the cultivation of an exclusionary mindset. The intent of elitism is to exclude, not include. The more elitist an idea is, the greater percentage of society that is excluded by it. The more absurd and irrational an idea is, the more attractive it becomes as a tool of exclusion (one could hardly exclude many people if the elitist idea was that “the sun is shiny”, but a good number of people could be excluded if the idea was that kittens must be ritually raped and then disemboweled to please the nine-limbed satanic God of painful urination).

Politics is dominated by partisanship, and partisanship is dominated by elitism. In the Occupy movement, the fight against the ugly specter of elitism is constant because we aren’t the wealthy, we are those bullied and victimized by economic disparity. Just like the child on the playground, we have subconsciously learned to crave and adore that brutal and inhumane power that we consciously despise. Our hope, to a much larger degree than we would like to admit to ourselves, isn’t to end the illegitimate power structure that we fight against, just to depose the current beneficiaries of it. Of course, we all believe that we are as holy and pure as the driven snow. This illegitimate power in the hands of others is a danger, but in our hands, it’s the righteous sword of judgment that will bring freedom and cause rainbows set in the heights of the heavens to shower humanity with puppy dogs and lollipops.

The evidence of this menace lurking within is seen by the adoption of ideas and rules of interaction that are increasingly bizarre and inexplicable. It starts small, of course. However, the smaller our numbers get, the more our elitism grows. We want to save the world, but only if the world is willing to obey complicated rituals that are foreign to their experience and understanding. The smaller we get, the more we will tell ourselves that our numbers are decreasing because we are so “cutting edge” or “revolutionary”, and the more the hopelessly elitist among us will admire the repellent capacity of the movement and rise to the top of the social order with the intent of adding to those repellent practices and ideals.

If we abandon ourselves to elitism, like a great majority of popular movements in the past have, we’ll just become increasingly marginalized until we’re eventually reduced to demanding the politically laughable for reasons that are logically unfathomable to reach a goal that is physically impossible.

Elitism will be the death of us, if we let it.

2 comments for “The Creeping Death of an Elitist Notion”