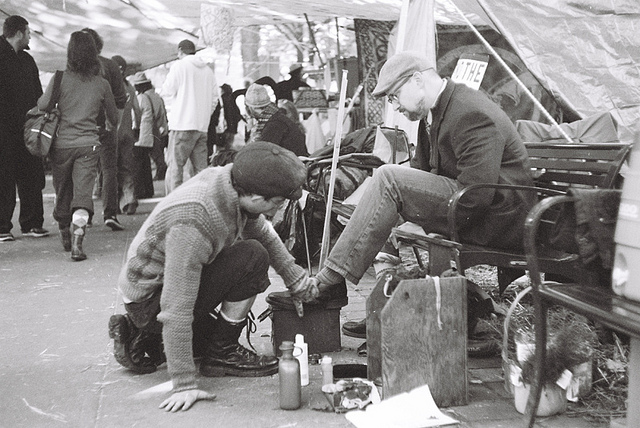 It used to be that the homeless were the drunks and drug addicts that lived under the local bridge and people largely ignored them. In today’s world the faces of the homeless have changed, and it’s becoming increasingly hard to ignore. There are still many who choose to live on the streets, but there are an increasing number of those who are in the streets due to the economic times we face today. Cities across the country struggle with the harsh reality of people living on the street with nowhere to go. With city budgets being cut and community resources depleting due to high demand and a lack of money, just dealing with the increasing need for shelters is a problem.

I interviewed two different people, in two different states, with two different stories. What surprised me the most is that although there are major differences in how they got to the streets, the struggle for survival and basic human needs remains the same. Food, shelter, clothing, and medical care (and how to obtain them) is a constant daily battle.

Jimi, a 50 year old man, raised in an upper middle class home with all the advantages that that implies, chose to leave that environment at age 18 for the streets. He states that he had an aversion to society and its rules. He would rather live on the streets by his own rules than bow down to what society says he should be and do. He admits that his addictions to drugs and alcohol helped to fuel his desire to be left to his own decisions and rules. He said that although his life on the streets was difficult on his family he was happier there than anywhere else. When I asked how he survived he stated that being homeless isn’t that hard. He stated that he trolled dumpsters outside restaurants and grocery stores as they throw out perfectly good food that can’t be served or sold to the public anymore, he collected cans to sell, sold flowers on the corner, that college campuses were great resources for items to sell or pawn. He said that students would routinely toss out televisions, and other electronics, as well as clothing and other items of value at the end of the term in an effort to reduce the amount of baggage they took home. He slept wherever he felt he could, sometimes in a garage, sometimes on a bench, sometimes in a doorway. Never worrying about his safety or what was going to happen that day. He says the homeless weren’t hassled like they are now, that they were ignored.

When he came off the streets, after 20 years, it was due to medical needs. He had overdosed on heroin again, and had a high blood alcohol level when his potassium levels spiked to the point he lost use of his legs and suffered kidney failure. He went home upon leaving the hospital to recuperate, finding that learning to conform to the constraints of rules that were not his own after so many years on the streets was more difficult than being homeless. He now has a home of his own, and says he would rather be on the street. That life was easier and happier there, that he felt free when he was left to his own rules, but that his health will no longer afford him that lifestyle.

Phillip, a middle aged man from Arizona found himself in Florida looking for work after losing his job making sprinkler systems, and losing his home. He told me that he went to Florida to find work after seeing a newspaper article about many jobs there due to hurricane Charley. Upon arriving in Florida he went to the local Labor Ready office and found a flyer about the local homeless coalition, not knowing the streets there, it took him two days to find it. He had to learn where to set up his tent, where to get food, where the good spots were to find cans to sell, where to shower, and how to maintain his dignity living on the streets. The local churches there provide showers, clothing, haircuts, and lunch for the homeless twice a month. The rest of the time he washes up in restrooms around town, and utilizes water he gets from the coalition there. He receives $200 a month in food stamps, and eats supper at the coalition every night. He says he has nothing of value for anyone to steal so he doesn’t worry about leaving what little he can’t carry in his backpack at the campsite. He looks for work every day, getting more discouraged as the months roll by with his efforts going unrewarded. He says the shelters, what few there are, don’t have enough beds, some are not safe, and that he is more secure in the environment of the camp.

He has utilized the public library to write and publish a book while homeless, although the sales are extremely sluggish from this endeavor; he continues to work on a second book, believing that his efforts will someday be fruitful. He is a constant beam of optimism in what would be a very discouraging and depressing situation for those of us who cannot imagine or refuse to believe what the realities of the homeless are.

Most people still have pre-conceived notions about who our homeless in this country are and Phillip does not represent those ideas. People don’t want to accept the fact that the face of the homeless has changed. They don’t want to see the families on the streets, or the hungry children. I think they are embarrassed that in this country we have such an issue. They want to keep the homeless out of sight, shoved under a bridge, or by the railroad tracks. They make laws that make it illegal to sleep in public parks, doorways, or the streets themselves. They want to keep them away from us, so when they spill out into everyday society fighting for basic needs, we arrest them, or otherwise try to sweep them away.

Here in Portland, we pride ourselves on being a homeless-friendly city. We have a homeless coalition, churches, and other organizations doing what they can to provide people with housing, food, and other basic human needs, despite decreasing funding and donations. We also recognize that in the last year alone the rate for homeless families has jumped 35% (Bauer)

Eric Bauer, Executive Director for the Portland Rescue Mission, stated in a recent interview “that homeless families are making up the majority of people living on the streets”. There are great resources there, but there aren’t enough beds or funds to help them all. He says that a lot of people “couch surf”, or sleep in garages or cars, and that many have to choose between food and housing. Some though, choose to pay rent and eat at the shelter at a cost to the shelter of $1.88 per person. The shelter feeds about 1700 a day. He further stated that the shelter also provides 500 to 600 additional people a day with a place to receive mail, food boxes, toiletries, and resources for job training, schooling, or just a listening ear at the Old Town facility. With the increase in demand and dwindling funds, it has become a real challenge to meet the needs of the people in the streets and to change the perception of what homelessness is, in order to change how we deal with it.

No longer is the face of the homeless the wino on the corner that elicits laughter or apathy. It is everyday families and people–most of which are there due to no fault of their own–that have lost jobs and homes due to the corruption and greed of the housing market. Corporations have taken the jobs traditionally held by the broken middle class of this country overseas for cheap labor, and our government sits idly by watching. We, as a nation, should be ashamed at the state of the system that has allowed this to happen. How can we tell other countries how to treat their people, when we have abandoned ours, leaving them unemployed, homeless, hungry and angry? How can we expect them to take us seriously when we have our own citizens uprising in the streets? We can no longer sweep them under a bridge and pretend there is not a problem. There are too many homes and warehouses that sit empty. If it were not for the greed of the owners preventing it, who would argue that these should not be utilized to house and restore some sense of dignity to these people in order to help them help themselves? Just like the protesters on Wall Street, they don’t want a handout, they want a hand up. They want to be productive members of society. They want a home, food, and jobs; basic human needs, which the top 1% and our government have pillaged away from them.

What we as a society choose to do about the increasing population of the homeless in our country will say a lot about who we are as a people. Are we going to let ourselves become the laughing stock of the world, and become branded as hypocrites? Or, are we going to step up and make the changes necessary to fix what is broken and shameful in this country? Are we going to make our legacy to the world and each other one in which we can again have pride in saying we are the greatest country in the world? Will this legacy uphold the ideals and values that made us great in the first place, or are we going to continue down the path to our own self-destruction? Only time will tell.